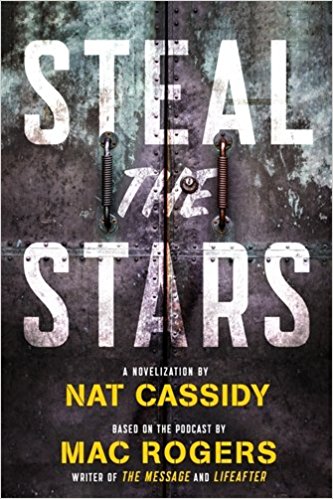 Steal the Stars is based on a 14-episode podcast that has been adapted and expanded into a novel by the author Nat Cassidy.

Steal the Stars is primarily a science fiction love story between two characters, Dakota and Matthew, but it feels like an epic novel as the story takes on some crazy plot turns.

Dak is an employee at a secret service facility. She is on high alert, and her high-pressured lifetime job leaves her never considering a future beyond the here and now. In her line of work, there really are no consequences for what she does in the outside world. After all, she is working for an agency that is harboring a UFO and spaceship!

Introduced as an ex-military, all-around bad ass, her character was intriguing from the start. In part one titled ‘The Death of Dakota Prentiss,’ the first lines inform the reader that she has just broken a guy’s collarbone twice her size. Along with the chapter name, the reader is led to believe that this incident is the pivotal moment that changes everything.

Back at work, she learns of a new recruit joining the security team. On first sight, Dakota knows that something is different, and her life changed forever. Matt is the change. He is also ex-military and years younger than Dakota. When they first met, Dakota hoped and prayed that Matt passed all the security checks and was already willing to risk her own life for his for a man that is a stranger.

The problem is that their job has a strict policy of no fraternizing with co-workers. Their magnetism meant they couldn’t stay away from one another, and you know that this will become a tragedy.

Their relationship started out as purely sexual, and the couple had nothing else to cling to. They were both ex-military and had been trained not to discuss their previous tours and their personal lives, and they soon discovered they were not on the same page of this ‘risk it all’ love.

Dak’s vulnerabilities were juvenile, and the way they were played out in the novel didn’t seem to ring true of a middle-aged woman that had been alone for so long. Her selfishness and her jealous traits undermined how she was introduced at the beginning of the novel. They say that love does funny things to you, but as the reader, this was infatuation, lust, and loneliness rather than love.

When Matt called it quits in a boyish manner after Dak had risked it all, it felt like a ‘told you so’ moment.  Her rage at that moment was entirely understandable. It was a great moment in highlighting their difference in personality.

That was where the novel felt like a young adult book, as the relationship was built on no depth. When they decided to run away together with the Alien to sell to the Chinese, the plan is hurried and illogical with too many gaping failures.

Dak and Matt’s relationship was pretty much disinteresting to me. I was far more invested in the relationship that Dak had with Lloyd and Patty, her two best friends at work.

The first half of the book was the most interesting when I learned about the UFO named Moss, the Harp that is effectively a nuclear weapon, and how the agency goes from scientific research to being requested to replicate the harp.

It was the science fiction that kept me engaged more than the love story. Dak’s complicated relationship with her colleagues that yearned to be her friend was frustrating, and I wanted her to let down her guard to those that had put in the time and effort.

An even more complicated element to the novel was Dak’s relationship with other women. With both Patty and a friend from her past, there was an underlying acknowledgment that both women loved her, and they expressed discontent that she loved a man over them. I felt there was so much to read into this and the authors intention from Dak’s unrequited love (whether sexual or not) to these two women.

Overall, Steal the Stars is a good read, but next time give me more aliens and a little less love.

Disclaimer: I received an advanced reader copy from the author/publisher in exchange for an honest review.

Catrina is from London and works abroad as a high school teacher, teaching High school film in the Philippines. She’s a serial traveler and has lived in Hong Kong, Spain and El Salvador (yes, murder central!). She binge watches TV shows, takes photographs, and occasionally blogs about her traveling adventures.