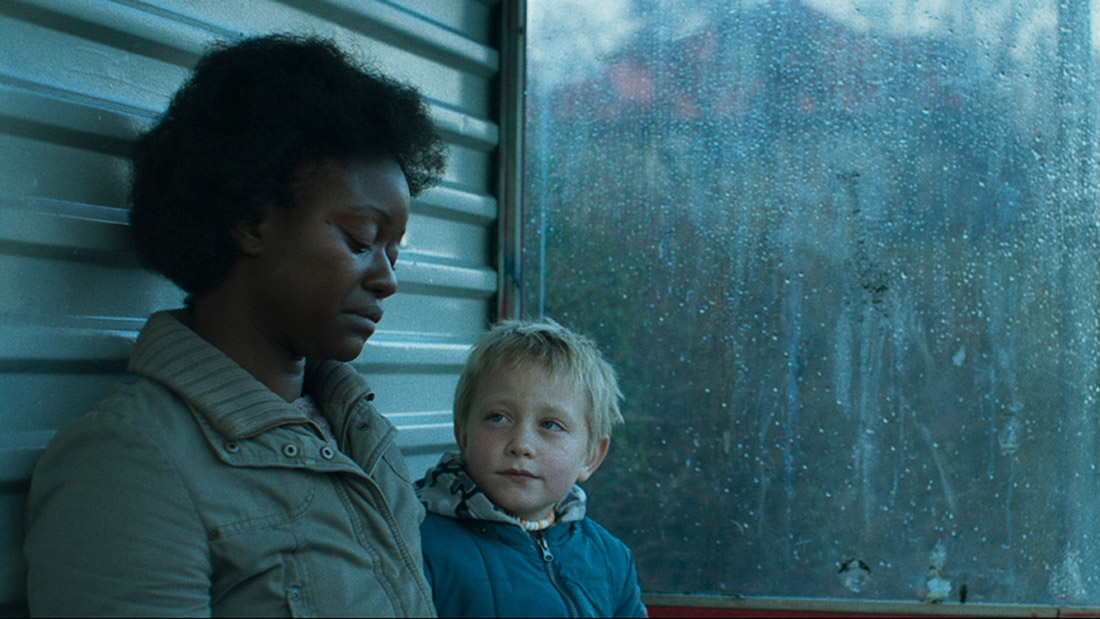 Written and directed by Ísold Uggadóttir, and winner of the Sundance Directing Award in the World Cinema Dramatic category, And Breathe Normally is a nice attempt at multicultural bridge-building across international borders, but never truly sticks the landing. The plot presents a set of circumstances that rely on dangerous tropes to further its narrative–making it impossible for me to suspend disbelief. What’s unfortunate is two great performances (by Kristín Thóra Haraldsdóttir, and Babetida Sadjo) are buried under this unreasonable plot.

At the edge of Iceland’s Reykjanes peninsula is the quiet and unassuming Keflavik airport. It is here that Adja (Babetida Sadjo), a refugee from Guinea-Bissau on route to Canada, finds herself stranded when stopped by a border patrol officer during a layover. It so happens that Lara (Kristín Thóra Haraldsdóttir) works as a border patrol officer in training. This struggling young mother is the real reason for Adja’s detention. Now having to fight for asylum in Iceland, Adja has few options left. She is thrown into a halfway house as she awaits a verdict, while Lara is now “working homeless” as she and her son Eldgar (Patrik Nökkvi Pétursson) live in the family car.

Adja’s situation causes Lara to feel guilty, even though she was just doing her job. Serendipity would have it the women continue to cross paths until an act of undeserved kindness from Adja finally brings them together. This is where things become unreasonable as Adja continues to put herself in further danger to help Lara. She risks another legal infraction by moving Lara and her son into her room at the halfway house. Soon Adja begins to take Lara’s son to and from school while Lara goes to work at the airport. It becomes even more outrageous when Adja takes the fall for drugs that belong to Lara whose negligence continually gets her in trouble, yet Adja is there to clean up the mess. Why is she doing this for a stranger?

The third act finally reveals that Adja is a lesbian fleeing persecution from her home in Guinea-Bissau. Instead of focusing on the socio-political implications of what it’s like to identify as LGBTQ in countries around the world, the film spends too much time dealing with Lara’s screw-ups, and Adja playing mammy in this phony relationship the story forces the audience to accept. Why are movies still like this in 2018?

The actresses are trying their best to keep And Breathe Normally from falling apart. Laura isn’t wholly likable, but Haraldsdóttir does an excellent job of bringing the character to life. Babetida Sadjo as Adja doesn’t have many lines but knows how to use facial expressions to get the point across. This story does nothing but hold Sadjo’s talents back as the sympathetic performance made me pity the character more than root for her succesful ending.

There is a silver lining, though. Before the Icelandic government plans to deport Adja back to Guinea-Bissau, Lara gets her act together long enough to devise a plan to help Adja escape. And it works! Adja leaves for Canada, and we’re right back where the film started. Too bad by the time we reach the climax I was too caught up in its ugly tropes to enjoy it. There’s nothing of value to glean from And Breathe Normally except a lesson in how not to write a story about Black women members of the LGBTQ community.