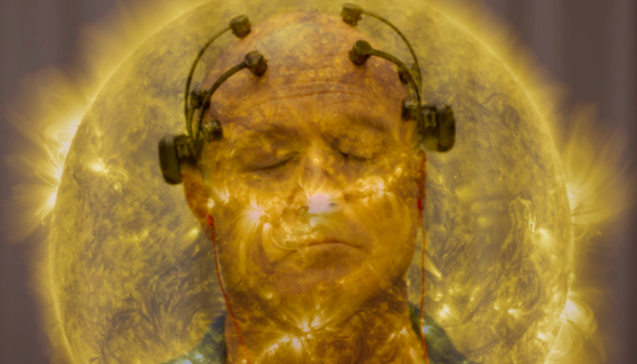 At first sight, Theo Anthony’s new artsy documentary film could be a conception on the history of the camera or homage to the human image; but go deeper and Anthony is saying something about the many ways pictures, images, video, or anything that can be framed, can tell a story.

He is also asking whose story, from what point of view, and what happens outside that frame.

However, in doing so, the filmmaker creates a complicated and sometimes confusing presentation that is in danger of limiting itself to camera buffs and surveillance aficionados. Instead of the wider audience of people who want to understand how much video has helped and hindered criminal investigations.

Anthony, a  Baltimore and New York-based director, photographer, and Sundance Film Festival fellowship recipient juxtaposes historical narrative on early camera inventions, a focus group monitoring attention span while watching videos,  with shots of footage from the 21st-century body cam, a visit to Axon headquarters, makers of body cams, drones, and tasers often used by police departments, to people staring at the 2017 Eclipse to the attaching of cameras on pigeons to make the case that all images are subjective. All perceptions are subjective.

He turns to famed 19th Century French scientist and photographic inventor, Etienne  Marey whose multiple camera plates contributed to what later became motion pictures, and policeman Alphonse Bertillion who first used specially-angled pictures to thoroughly photograph a crime scene, as evidence that the eye is fickle and only sees “that of which it already has an idea.”

It shouldn’t be lost on any viewer of this documentary that Anthony, a white man,  is aware of the barely controlled frustrations between the Baltimore Police Department and the Black community after the 2016 death of Freddie Gray led to citywide rioting.

And who can forget the 2018 headline-grabbing news of Dallas resident Botham Jean, an accountant, eating ice cream on his couch when he was fatally shot by a just off patrol, police officer Amber Guyger.

Released video footage showed outside the apartment and the aftermath of Guyger making no attempt to help the victim and police arriving on the scene but none of the actual incident.

Perhaps the best parts of the documentary are the look on Baltimore policemen and women’s faces as they are lectured on the new body cams they will wear in an effort to stop or control future tragedies or insurrections. The bemused, bored, both knowing and quizzical looks on the faces of the officers speak volumes, perhaps more than Anthony and crew realize. It’s very apparent that some do not think they need to be there and from the looks of it, not too happy to be on camera.

One thing Anthony’s crew does seem to relish is the time spent at Axon headquarters, where a company spokesperson goes overboard trying to explain how high-tech the offices are and how amazing their products are. The big get is that in talking about surveillance equipment, the spokesperson seemingly, unknowingly gives away intel about the company’s in-house surveillance.

There are no obvious segues in this documentary, only jumps to the next thing. In this case, it’s to a Baltimore public meeting where a police officer tries to sell the idea of body cam use in the community.

Unlike the officers, the audience doesn’t sit quietly but argues why they are for or against, and in the end, there seems no real collective solution. Then there is another switch, to children in a Baltimore inner-city public school shooting a movie using all the latest technology.  The scene is a confusing array of shots, angles, and kids using their most adult selves to act, direct and produce. It goes on for some time before abruptly shutting off.

According to information received by Blackgirlnerds.com, Anthony spent months shooting this footage but eventually decided that all that he saw during this time did not go with the general theme.

Anthony concludes with a quote from 19th-century abolitionist Frederick Douglass on images that sums up what he tried but failed to clearly convey: “We all feel that there is something more. That the curtain has not yet been lifted. There is a prophet with us forever whispering that behind the seen lies the immeasurable unseen.”

Credit given to composer Dan Deacon and sound designer Udit Duseja for giving the film suitably haunting music, especially during lead-ins to the historical narration.

All Light, Everywhere premiered at Sundance on Jan. 31.