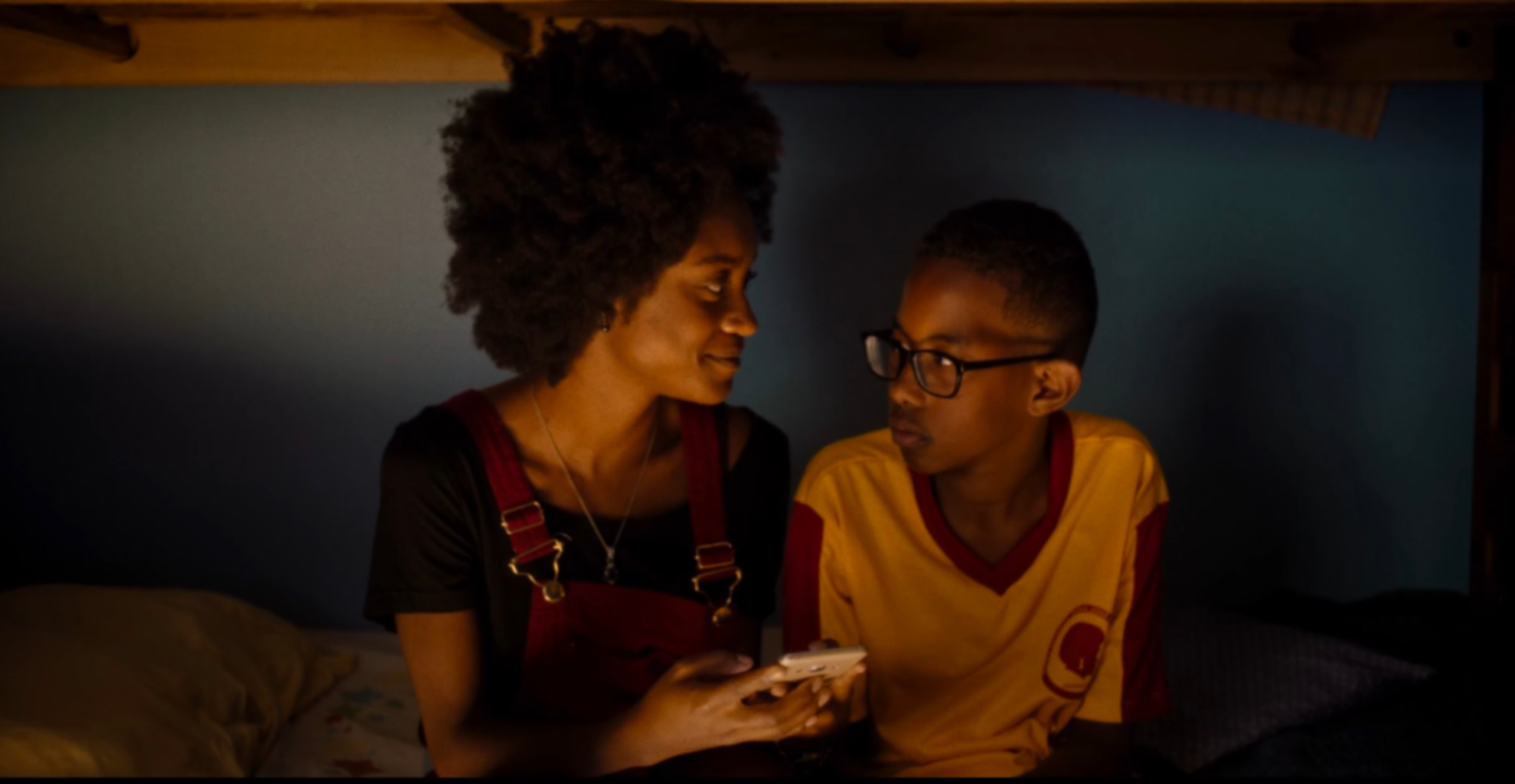 As the official selection for the 2022 Sundance Film Festival World Cinema Dramatic Competition, you’d expect Gabriel Martin’s Mars Um (Mars One) to do some heavy lifting, and boy does it ever. Mars Um is an exploration of a Black Brazilian family who clings to family, acceptance, and the concept of reward for hard work, even in the face of challenges that test the way they view themselves.

The Martins (or Martians if you like) are a family who dares to dream. Living in the lower middle class with jobs as domestic and maintenance/security workers for the more fortunate, they manage to find happiness despite life’s obstacles. There are the parents, Tércia (Rejane Faria) and Wellington (Carlos Francisco), and their children, Deivinho/Deivid (Cícero Lucas in his film debut) and Eunice who is affectionately called Nina (Camilla Damião in her first leading role). Both Tércia and Wellington work in a local highrise that houses some of the most influential Brazilians, including soccer star Juan Pablo Sorin and influencer and entertainer Tokinho. Both are loyal and hard workers and don’t have any resentment towards the wealthy residents. Martin does a good job of showing these disparities by showing the Martin home as small and cozy and the highrise penthouse balconies as spacious, modern, and airy. Even in the face of this, the parents appear to be content.

Their children are another story. Nina is studying law in college and eager to graduate and possibly move out of her childhood home to live with her new girlfriend, Joana. Deivid is interested in astrophysics and specifically the Mars One colonization project that the title of the film is based on. His hero is Neil deGrasse Tyson, and he wants to build a telescope, not be a soccer star — at least not just a soccer star — like his dad wants.

Written and directed by Gabriel Martins, this semi-autobiographical and beautiful film hits it out of the park on nearly every swing. The only true flaw oddly has to do with the description of the film. On IMDb, it specifies the election of a right-wing president who represents everything the family is not. This entity is essentially non-existent; however, that doesn’t mean political themes aren’t present.

The Martin family is the core and the heart of Mars Um, and in that vein, Tércia as the mother is truly the soul. She’s the victim of a frankly heinous prank that shakes her to her core. Everyone else makes light of the situation, but Tércia suffers from headaches, insomnia, and disorientation as a result of the incident. Once similar incidents around her become more prevalent, she begins to wonder if she’s the problem. Is she cursed? Faria’s performance is crucial to carrying the tone of the film and it’s a feat she pulls off beautifully. She understands that a little is a lot and she’s able to earn her outbursts as a result.

A recovering alcoholic, Wellington has a lot to be thankful for although he’s a bit too distracted trying to turn his son into the family’s savior through soccer. He’s optimistic to a fault and misses a lot of red flags that come his way. He’s loving and a good man but seems to have era-typical semi-misogynistic blind spots. It would be easy for Francisco to play Wellington as a one-dimensional character, but he chooses the path that gives Wellington a kind of sympathetic pathos. Francisco embodies the character fully and never slacks in making the patriarch palatable.

A tutor and college student by day, Nina spends her night at local queer hip hop clubs in their city. One night she meets a girl with electric blue braids who takes her breath away. Nina is withholding from her parents and only admits to Deivid (in the small room they share) that she’s dating a girl and thinking about moving out with the electric blue plaited Joana (Ana Hilario). For her first feature role, Damião brings beauty and rebellious heart to the role. She’s able to maintain Nina’s stubbornness without it coming off as obnoxious. Though her relationship with Joana seemed a bit rushed, Damião committed completely, delivering a fully realized performance. Nina sets her sights on leaving her parent’s home and their watchful eyes and making sure Deivid has the same independent spirit.

Deivid is a typical kid who has a talent for soccer, but would rather be studying astrophysics and Mars. He’s read extensively about Mars One and seems to be stuck on the fact that it’s a one-way trip only. He’s eager to run away. Though he loves his parents and his sister, he’s beginning to find himself and needs the space to do so. Mars Um is Lucas’ film debut and his performance is understated and not precocious. He’s smart, but still very much a kid. His performance is so matter-of-fact that you come to think of him as your own little brother. He’s real and his acting is very impressive given that this is his first major project.

Although the newly elected president doesn’t seem to have any direct effect on the narrative, it’s interesting to see how political engagement and protest show their face in the film. Nina and Deivid are from a more equitable, better-educated generation. Wellington’s new co-worker speaks openly about occupying the pool at their highrise and protesting. Wellington hears his rants and just laughs, waving them off. For Wellington’s generation the time for protest is past. He’s content to be working hard. Sure he would like a little more money, but it’s just not his time. Martin does a good job of using the storylines and the conflicting opinions of each generation as a metaphor for today’s political divide. In the film, we see Tércia and Wellington at a crossroads where they must decide whether to be left behind or keep moving forward.

Mars Um is a simple yet layered film brimming over with emotion, solid and beautiful performances, and relatable characters. It’s truly worth the title of Official Selection and you’ll treasure every minute you get to spend in Martins’ world.

Mars Um (Mars One) premiered at the 2022 Sundance Film Festival.