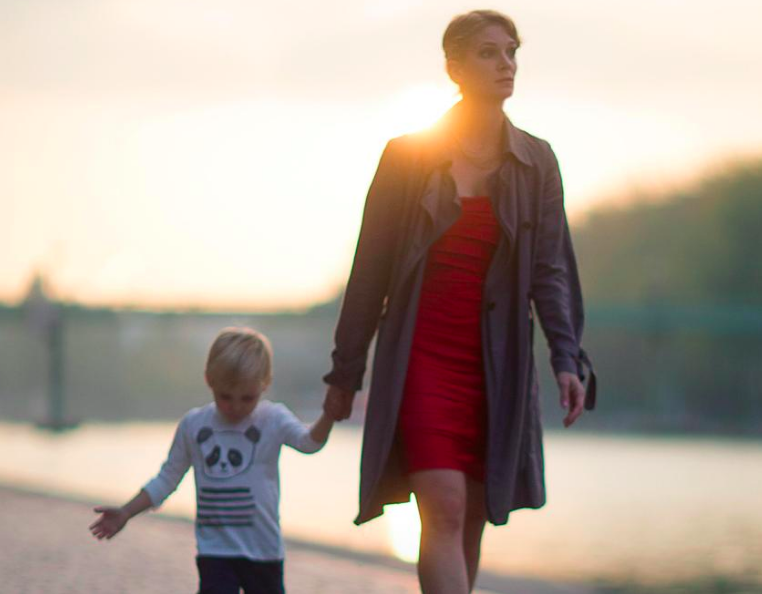 Alice Ferrand (Emilie Piponnier) seems to have a perfect life. Her husband Francois (Martin Swabey) is doting and successful. Her son Jules (Jules Milo Levy Mackerras) is as adorable as they come. But Alice’s idyllic life comes to a screeching halt when she finds out her husband hasn’t paid their mortgage in over a year, having used the entirety of her 90,000-euro inheritance on high-end escorts. Francois has gone missing and won’t return her calls. Finding herself literally penniless and about to lose her home in a matter of weeks, Alice finds herself working as an escort at one of her husband’s old favorite companies in order to salvage what she can of her life. But Josephine Mackerras’ Alice, which premiered at SXSW this past week, is about far more than a husband’s infidelity and a family turned upside-down.

Financial and economic abuse is a problem far too many women in the world suffer from, and most especially after they’ve had children. Limited childcare options serve to keep women at home. And the longer they are out of the workforce, the more reliant they become on their partners to provide economic support. While Alice does have a part-time job, it isn’t nearly enough to offer the 8,000 euros she needs quickly once her husband disappears. But sex work can at 1,800 euros for an hour, 3,000 for a dinner, and 4,000+ for an overnight. For Alice, this choice is a matter of necessity and survival.

Alice befriends another escort at her new job, Lisa (Chloé Boreham), who takes her under her wing with a crash course in how a date should go as well as tips on how to seamlessly perform her required duties. Lisa’s matter-of-fact-ness about her chosen profession at first surprises Alice, but Alice soon finds she actually doesn’t mind the work. Lisa credits this to the exchange being perfectly equal, unlike in other sexual situations where the power dynamic may skew toward one partner or the other based on relative emotions. There is a brilliant moment where Lisa discusses how ludicrous it is that their elective, consensual sex work gets lumped in with human trafficking just because society uses the same word to describe both: prostitution. For both Lisa and Alice, sex work is not only empowering physically but also economically.

The social commentary in Alice does not stop there. After Francois steals all her money and takes off, Alice calls her mother and asks to come home. Her mother actually defends Francois, saying it’s Alice’s fault he cheated. “Maybe something was missing at home,” her mother says and tells her she needs to stay and work on her marriage. This sexist double standard has several more examples in Alice, and they just get more and more painful as the story goes on. Just as it would in real life, especially when a custody dispute is brewing. Francois stealing all his wife’s money and blowing it on escorts “only” makes him a bad husband, not necessarily a bad father in the eyes of society. But Alice being a sex worker translates to her being a bad mother. The misogyny and toxic male entitlement is infuriating.

Other than her tanked finances, Alice’s other main concern is her sweet boy Jules. But even this relationship becomes complicated once Alice begins single parenting. She constantly struggles to find childcare, and the last-minute nature of escort service calls aren’t conducive to hiring a babysitter. She learns that she has lived in a bubble consisting of only her husband and her son, without her own friends or network and not even realizing how important those things actually are for thriving in an urban setting. She ends up making more bad decisions just because she needs someone to watch her son at night while she’s working, and that person ends up being her husband who is working tooth and nail to get back in her good graces.

When we talk about the female gaze in visual media it’s hard to describe what exactly that means, it’s the kind of thing you just know when you see it. And Alice is a perfect example of what the female gaze looks like on screen, especially with regards to a narrative about sex workers. There is no female objectification. There is barely any female nudity. Instead, the camera focuses on the men as we sit and wonder: where is their wife/girlfriend/partner? Do they know what he does in his spare time? Are they spending their wife’s inheritance as Francois spent Alice’s for just a few moments of physical pleasure? Josephine Mackerras’s writing and directing are spot on.

The emotional roller coaster that is Alice hits absolutely every point, from the pain of betrayal, the sorrow of desperation, the self-empowerment that comes with making one’s own decisions, the angry ugliness of an ending marriage, as well as a healthy sense of humor about sex and intimacy. Most of Alice’s dates are actually really funny and oddly poignant. Her clients are all rather sad-seeming men and I never felt like Alice was in any danger. It’s refreshing to watch a story about sex workers that does not involve sexual trauma or violence. If we had more films like this there would not be such a skewed public perception about what elective sex workers do for a living. “Prejudice is more powerful than logic,” Lisa says to Alice, and this insightful statement can apply to so many things going on in the world at the moment aside from sex work.

Emilie Pipponier’s performance is controlled and nuanced, ranging from simmering rage to heartbreak to her self-efficacy slowly developing. Watching her was an absolute treat. Mikaël Delahaie’s photography and light design frame Pipponier’s work marvelously. Along with director Mackerras’s strong writing, all the elements in this film work together to make a poignant, painful, and darkly humorous film that often reminded me more of a stage performance than a movie. The ending was pitch perfect.

Because more than being a film about society’s double standards, controversy around elected sex work, and a family in dissolution on account of grotesque betrayal, Alice is a story about the pure magic of female friendships and how important girlfriends are in developing our own self-empowerment. Alice also does a great service in de-stigmatizing sex work, as well as highlighting the antiquated gender biases that need to go. It’s 2019 after all. We should be well beyond all this by now.