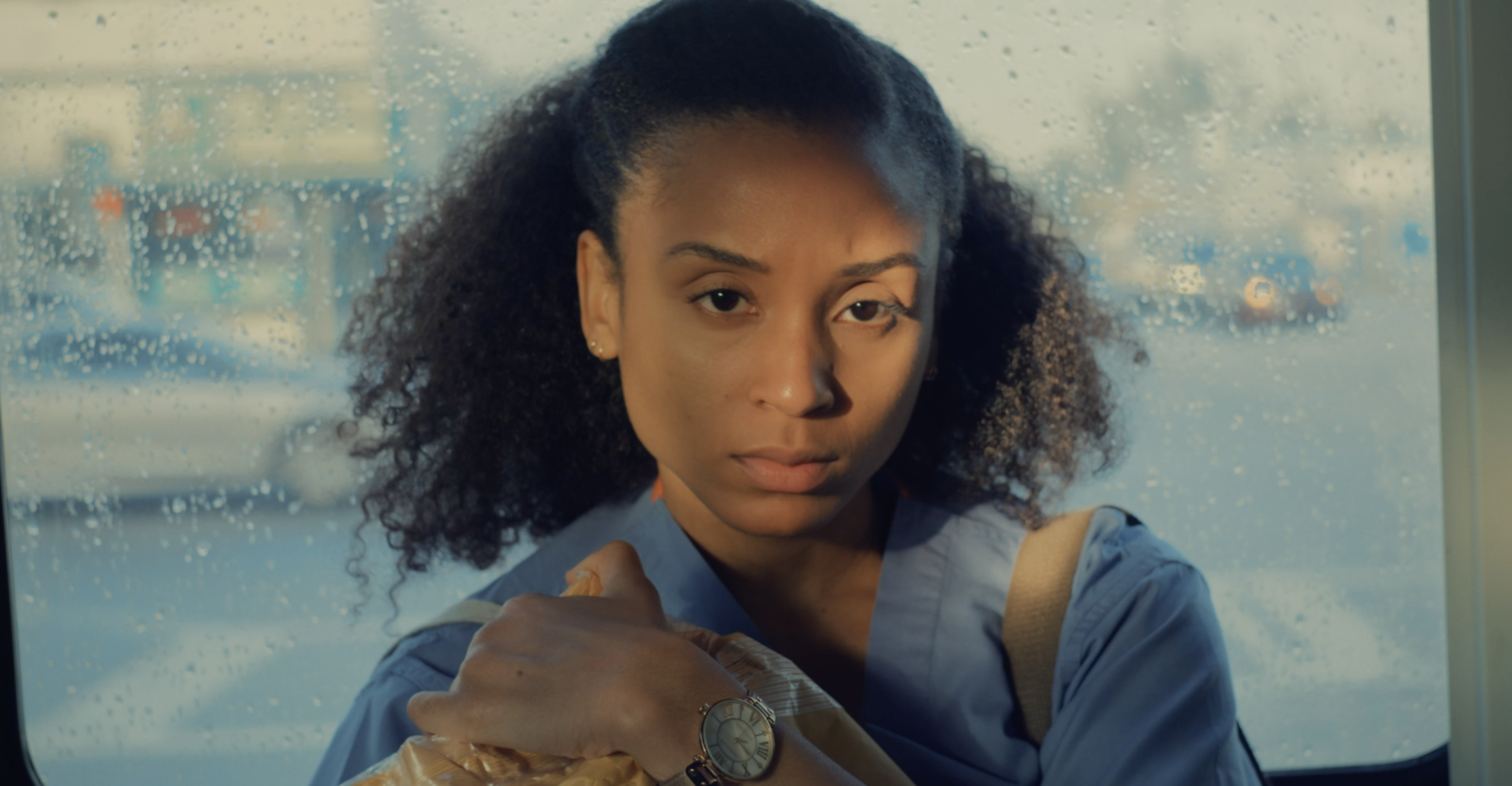 The concept of working hard to achieve your dreams is as American as apple pie. Every day, people get up at the crack of dawn only to return deep into the night with little to show for it. Ludi showcases that this American ideal has shaped people arriving into the country as well as those born here. However, is that a good thing? The drama, produced by Bantufy, follows Ludi as she battles with those around her and even herself to earn the rarely obtained American Dream.

Directed by Edson Jean, the film begins with Ludi (Shein Mompremier) playing a cassette tape back home from her family in Haiti. The clear exhaustion hangs on her body like a weighted blanket as she tries to be a source of stability for them. She wants to go above and beyond in order to provide, sending more money than necessary and even gifts back to her home. However, she is sacrificing herself in order for those other than herself to thrive. The audio sent between Ludi and her family plays a major role in being utilized as a segue between scenes as well as background into who Ludi truly is.

As imagery of citizens and homes of Miami’s Little Haiti community move across the screen in a blurry haze, Ludi tells stories about how she will be able to come home soon and see her family — knowing this will not happen. She describes her days as tiring but never going into too much detail about how she is doing in order not to panic them. It is obvious that despite her holding back, she feels like she is running as fast as she can towards her goals but not moving from her present position. Black women often have to work twice as hard to accomplish half of what their white counterparts have. For Ludi, a woman of color and an immigrant, the current standards of American society do not provide the privileges promised before arriving.

While Ludi works hard at her nursing home position in order to provide for her family, her workaholic personality still shows. She takes overtime from all of her other employees, but is never seen as an enemy due to her inner joy and eagerness to do what she sees as the “American way.” Along with her extreme hard-working attitude, those from Little Haiti see her turning into a true American — this is not a compliment. In one of the standout scenes of the film, Ludi’s co-worker offers to pray for her to find another source of income. Ludi closes her eyes and begins to listen to the prayer that starts with referencing her overall being and then morphs into how she is turning into a typical American. She doesn’t remember the last time she went to church, she is chasing money instead of a husband, and she does not want kids. She is seen as the antithesis of Haiti’s standards for women. Nevertheless, Ludi likes who she is and feels that hard work surpasses all of those life goals for the other Haitian women around her.

No matter how much someone wants to work, at some point there must be rest. Without it, any work you do will be unfruitful or even worse be chock full of errors. Ludi never stopped to consider herself, even if it meant her body ached or her eyes were heavy from exhaustion. She continued to work because she felt that not only was it something that she had to do for her family, but it was something she was called to do by God. Despite her motivations, everyone hits a wall and realizes that there must be self-care incorporated. Ludi learns this lesson from an unlikely source, her patient George (Alan Myles Heyman).

George to Ludi is everything she hates about Americans — rude, hard-headed and unwilling to accept help. However, the irony in their situation is that aspects of George are reflected in Ludi herself. They are both hard-headed, unwilling to accept help, and can attack when someone threatens their way of life. Ludi essentially puts up a fight with herself in the form of an older man and realizes how toxic living this way truly is. In a fit of rage, Ludi screams that she is suffocating from working so hard for little to nothing in return. After Ludi sends packages to her family, there is nothing left for her. She sacrifices herself in order to give a better life for her family. However, she does not work to create a better life for herself and herself alone.

In one of the last audio messages in the film, Ludi, while telling her family she cannot come home, again states, “Once this country has its hands on you, it never lets you go.” She is correct. America has a way of taking the most ordinary person and making them the superstar they always wanted to be or someone who they never wanted to become. It holds out a promise on a contract stating that you can have it all if you work hard and do what Americans do. The fine print, however, makes it very clear that who it favors are those whiter in complexion with money already in their lives. Nevertheless, there are those who broke the rules and succeeded. For Ludi, the rule she needed to break first was simple — working herself to the bone was not going to cut it anymore. Through self-care and being kind to herself, the American Dream that Ludi always wanted now includes her, too.