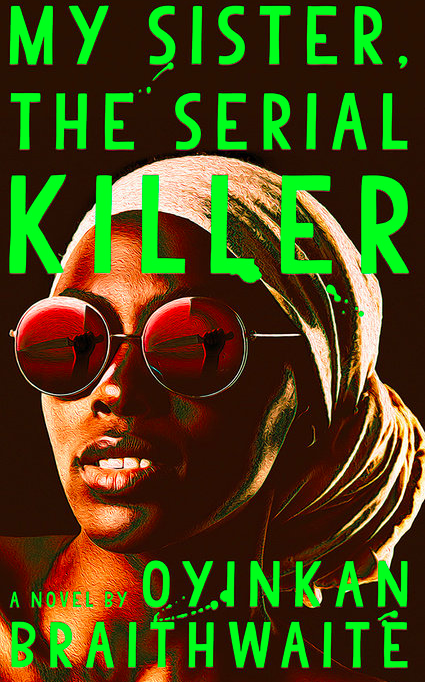 First, it’s the bodacious cover: neon green lettering splattered on a crisp image of a dark-skinned woman in reflector shades. You don’t even have to notice the poised knife in her view to want to read this. But if you do need a bit more, there’s this synopsis to whet any female revenge appetite: “a novel about a Nigerian woman whose younger sister has a very inconvenient habit of killing her boyfriends.”

My Sister, the Serial Killer, the debut novel by Oyinkan Braithwaite, is narrated by Korede, a deeply repressed, oldest daughter in a middle-class Lagosian family. As the first daughter, it’s her responsibility to mind after her younger siblings. She should be lucky because she only has Ayoola. But Ayoola has been wielding something dangerous since birth. As Korede tells us, their mother forgot to keep trying for a boy after being taken by her younger sister’s beauty. Ayoola has light skin, long dreadlocks, and “the body of a music video vixen, a scarlet woman, a succubus.” Where Ayoola’s beauty might have put her in danger as a child, she now uses it to the detriment of all who get too close.

As a second daughter in a West African family, I can recognize where my sister’s duty paved the way for my rebellion — but in this satirized relationship, Ayoola is completely self-involved. She lies, kills, and seems to have no guilt about it. She’ll throw anyone under the bus (or the blade of her knife, for that matter). Korede, with her diligent cleaning skills, has been coming to Ayoola’s aid after each murder; but after the third, the older sister is starting to wear down. Once Ayoola sets her eyes on Tade, Korede’s crush, Korede begins to reconsider her familial duty.

Though the book is physically set in Lagos, it’s more accurate location is within the power dynamics of a middle-class West African family. Hardly do we see these women outside of their home or Korede’s workplace. Instead, we see them in their contentions: mother and aunt vs. daughters, father vs. the women of the house, the women of the house vs. the house girl, the oldest daughter vs. her younger sibling, and so on. These collisions and entanglements of gender, class, and power make My Sister, the Serial Killer a necessary feminist read.

When one thinks of feminist African literature, the male-female relationships of books like Ama Ata Aidoo’s Changes, Buchi Emecheta’s Second Class Citizen, or even the more recent Lola Shoneyin novel, The Secret Lives of Baba Segi’s Wives come to mind. All books that feature struggles that women encounter within the institution of marriage. 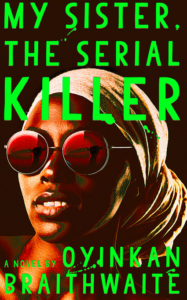 Though their decisions at times may not always be the easiest to understand, they are women who you want to win. With the exception of the house girl (who, in Korede’s perspective, goes unnamed), the women of My Sister, the Serial Killer are difficult to root for. They’re all too willing to sacrifice someone else for the sake of their respective motives.

Korede, who could be the juxtaposed goodness to her femme fatale sister, fails at this. Even before she is promoted to head nurse, Korede regularly treats other nurses and the cleaning staff with disdain. And over the course of the novel, she shows us more than once, she’ll risk their livelihoods to protect her image. While Korede and Ayoola act out of self-interest, their mom and Aunty Taiwo seem to be operating in the interest of heteropatriarchy.

They overlook their own terrible experiences in marriage as they hound the sisters with advice: cook for potential mates, invest in good weaves and kneel for a suitor’s parents.

These women prove over and over again that women are also perpetrators of patriarchal ideals and will abuse power so long as hierarchical structures are in place. The closest we get to any feminist disruption is Ayoola’s refusal to make distinctions of good and bad when it comes to men. For Ayoola, it’s #YesAllMen; speaking about Tade, she tells her sister: “He isn’t deep. All he wants is a pretty face. That’s all they ever want.”

Though I’m not ready to call Ayoola a feminist, I do believe Braithwaite has brilliantly captured some #AfriFem discourse and created a representation of family life that many will deeply connect with. I’m ready to see how these layers will be depicted on screen.

There aren’t many details yet, but in March of 2018, it was announced that My Sister, the Serial Killer had been optioned by two UK production companies: Big Talk (producers of Attack the Block) and Working Title. It’s a huge accomplishment for the debut author. However,  the announcement came so far ahead of the book’s release, it also created a set of expectations for the novel. I thought for sure I would experience a story told in rich, cinematic images; instead－especially early on－there was often a bland narration of events. While this may be a quirk of Korede’s repressed personality, it made for a dry reading experience. Still, I think this story is powerful in its ideas; it’s a great foundation for an innovative filmmaker to take on.

My Sister, the Serial Killer is out November 20, 2018, in the US and December 2018 in Nigeria. Read an excerpt on Lenny Letter.

Nina is a reader, writer, and cultural worker. She lives between Chicago, IL and Stone Mountain, GA.