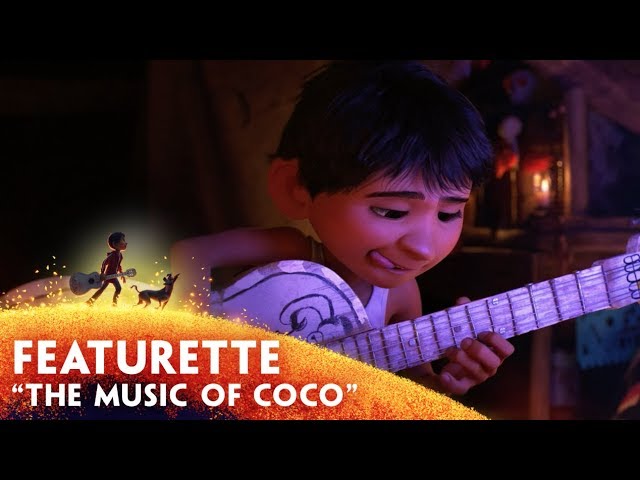 Coco is Disney Pixar’s newest animation feature, about young Miguel (Anthony Gonzalez) and his journey through the Land of the Dead on Dia de Muertos, with his new friend Hector and trusty sidekick Dante. Pixar has released a new featurette giving a behind the scenes glimpse into what went into making the music of, Coco.

With music composed by Michael Giacchino and Germaine Franco, lyrics from Co-director Adrian Molina and consultant Camilo Lara, special attention was made to make sure everything was authentically Mexican including the instruments used. During press day at Pixar Studios, Camilo explained that the main goal of the music division was to keep the music as authentic as possible and to achieve that they traveled to many towns to get a feel of the different styles such as Banda and Mariachi.

Every minute detail was carefully researched and translated to the screen, right down to the movements of Miguel’s fingers when he’s playing the guitar. The positioning of his fingers along the frets and strings match perfectly with those of the actual guitarist.

As with every animation feature Pixar produces, careful attention is paid not only to the story but also it’s execution and Coco is no different. “The Music of Coco” is as entertaining as it is moving especially, in it’s cultural significance to people of Mexico and those of Mexican heritage.

Coco premiered on November 22 to rave reviews from critics and general audiences alike, if you haven’t seen it as yet get to the cinema as soon as possible and give immerse yourself in the world of Coco.

ALSO READ
Black Films and Filmmakers Coming to TIFF 2022: What We're Excited For!