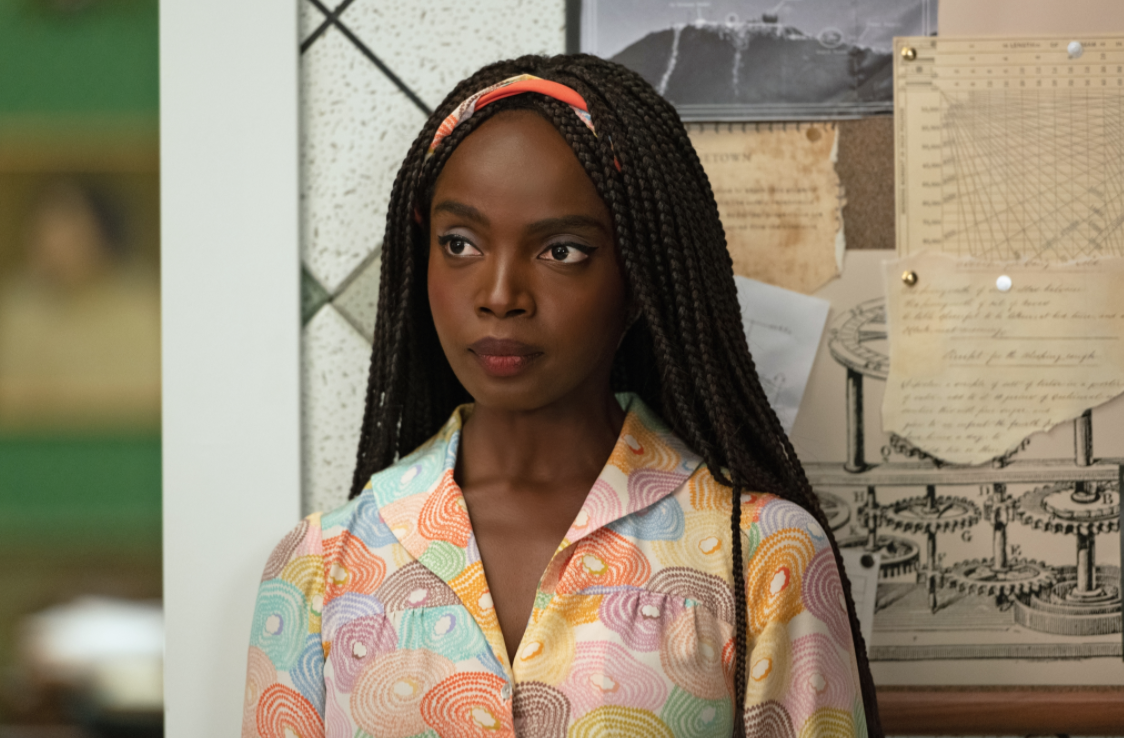 You may have seen MaameYaa (pronounced mam’yea) in a series and thought, “I’ve seen her somewhere else before” or “She looks familiar but not sure …” With glowing chocolate-colored skin and large brown eyes, the Pakastani-born Ghanian actress can play many types — from teenager to a young single woman making her way, to a private investigator or a mysterious cohead of a private school.

That’s what she plays in Disney+’s The Mysterious Benedict Society (based on the books by Trenton Lee Stewart). In her role as Rhonda Kazembe, she is both strict and mischievous, seeming to relish fooling her young charges.

Although she was the star in the African TV web series, An African City, she’s also appeared on Bluff City Law and in the comedic Hulu original series Ramy. She talked about taking on her new role, her experience filming in Africa, and even journalism. Yes, she could have been one of us.

You have a beautiful face and it blends into so many different roles. Have you been made aware of this by casting directors, agents, or others on your team?

I’ve never been told that but that’s the nicest thing anyone has ever said to me because I aspired to be a character actor. That is what I love to do. That’s very encouraging to hear that I look like I can play a bunch of different characters.

And speaking of that, how would you describe your character in Benedict Society?

Rhonda Kazembe, she is a mysterious girl all on her own. She is very sure of herself. She definitely has a reason she is so confident in who she is and why she is willing to risk everything in order to look for the truth.

She has a big heart for children as you’ve seen in the first four episodes. She’s very knowledgeable. She’s a character in herself, and she’s two different characters. When you first meet her, she’s playing a kid. On the set, a lot of people have different jobs.

I love the fact that she is a voice for the African community without it being hit hard on the head. She’s unapologetic about her acting, her sense of fashion (which has nods to different parts of the continent), and her style. She has a hair journey. You see her with braids. Now she’s rocking an Afro. At one point, she says, “I’m taking my braids out and [my hair] is still under my scarf so that’s how I am rolling today.” I’m loving it. I love that about her.

You seem to be comfortable playing characters with authority. Why?

I’m learning who Rhonda is. We originally were going to shoot last March and then good ol’ pandemic. We were all waiting with bated breath to see if the show would continue because there’s a couple of productions that just collapsed because of the pandemic. So once we found out around June that we were going on, I was super excited and would talk to the showrunners and ask them what was their vision for Rhonda.

She’s mentioned in the book but you don’t see her that much. The showrunners got the liberty from Trenton to go as far as they can, to make every character three-dimensional.

So what I am looking forward to seeing in Rhonda from the book and from the script is someone who I aspire to be like. I am learning from Rhonda to be more confident and independent, stand up for the truth and all of that. The kids in the show, the characters, that’s what they are doing. In many ways, they are the adults in the show. I’m learning from the kids and how they lead with empathy encourages me.

Is there a difference between filming a web series in Ghana versus the United States?

We shot two seasons. The first season I was not part of SAG-AFTRA yet. There’s a huge difference already when you’re protected by the unions. I also had different representation.

I was happy to be a part of this series shot in my own country. It was a sense of pride for me. I grew up overseas but I always let people know I’m from Ghana. On the set, a lot of people have different jobs.

The first season was a passion project from the creator and it just blew up. In the second season, we have more people on board. We had more people behind the scenes. So it was already a little engine that could and now it was an engine that was very well oiled.

To be able to just be in Ghana and be good friends with the crew members and everyone just converse in my language, I hardly get to do that.

Okay, I gotta know, you majored in journalism? Didn’t anyone tell you that it’s now just as difficult getting a job as acting?

It is, isn’t it? I majored in broadcast journalism. Growing up I was really intrigued by newscasters. I really enjoyed my assignments, interviewing people. I was part of the newspaper in high school. Once I got to college, I thought, I really want to succeed at acting but I made sure I got a degree

So yes, I chose journalism, yep. I also interned at Voice of America. I remember I had to interview people, but because I was a new intern, I didn’t get to do my own voiceover. It was a cool experience. I enjoy journalism a lot. I love reading articles and appreciate what you guys do.

What do your parents think of you now now that you’re working in doing so much?

My parents have been very supportive. They’re also very fun-loving people. I don’t get to see them often but I enjoy every moment that I get to spend with them. They’re pretty awesome people. My dad, his dad jokes are especially pretty corny in the best way ever. My mom, I am very inspired by how independent and strong she is.

The Mysterious Benedict Society is currently streaming on Disney+