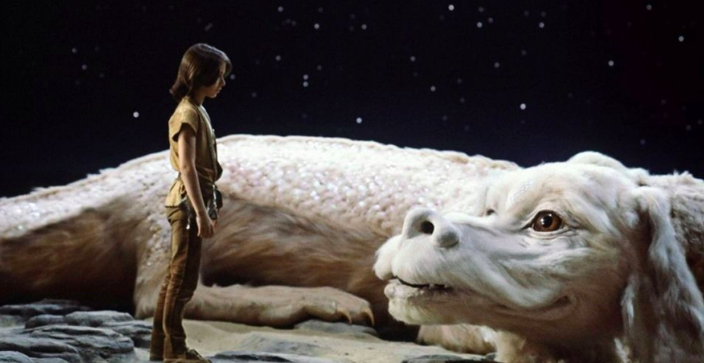 In a land and time not that far away, there once was a sweet, imaginative, and sensitive boy named Bastian Balthazar Bux (Barrett Oliver) who had just lost his beloved mother.

After being bullied by his dad (Gerald McRaney), who thinks Bastian should be over his mother’s death, to the three classmate tormentors who toss him in a dumpster, Bastian is having a most terrible day. He finds sanctuary in the bookshop of Carl Conrad Coreander (Thomas Hill), and steals, I mean borrows, a story he’d never read before. Because he knows he’s going to get in trouble for being late to school anyway, he holes up in his school’s attic with the mysterious tome. The NeverEnding Story follows this unwitting armchair hero as he confronts the demons and monsters of his childhood trauma.

With all the nostalgia surrounding this film and the real-life Nothing that has been slowly spreading across Earth over these 35 years since The NeverEnding Story hit theaters, it’s easy to forget that schools weren’t always safe spaces even before gun violence. Bastian’s math teacher is a jerk and a narc, who either isn’t challenging Bastian enough in class, or can’t manage to see that Bastian’s talents rest elsewhere and won’t find a way to encourage him. And of course, every day Bastian is terrorized by three classmates who taunt and humiliate him mercilessly. The only safe place in Bastian’s world is books. That is, until he finds The NeverEnding Story.

All these decades later, The NeverEnding Story holds up incredibly well. The film has an almost overwhelming number of messages. From colonization and dispossession of land to the apathy of adulthood as well as the power of new beginnings that come with a fresh name, The NeverEnding Story is not just a fantastical tale about monsters, faith, and hope. We can read the Nothing and his lone wolf emissary Gmork as metaphors for the pain and bleakness of depression, the total loss of hope and imagination, in particular as people grow up and grow out of the fantasies of childhood. The NeverEnding Story is its own philosophy about survival and perseverance as well as the power and competence of children. Over at Looper I’ve explored a super deep dive into these themes, and more.

But in the context of current events after the mass shooting tragedies in El Paso and Dayton, there is a much more sinister interpretation of Gmork — and the Nothing — that deserves exploring. In America, unlike Black and Brown counterparts who are labeled thugs and terrorists, when a mass shooter is white he gets called a “lone wolf” and mental illness is often blamed for his actions. This happens even when the shooter explicitly states that his motives are racist and/or misogynistic, as both the El Paso and Dayton shooters did.

In The NeverEnding Story, the lone wolf Gmork is the physical embodiment of the Nothing, a dark force that is destroying Fantasia. When he finally meets his nemesis, the innocent child Atreyu (Noah Hathaway), Gmork tells him that the Nothing is “a kind of despair.” He says it’s a hopelessness that makes average people easier to control.

Today, in our world, one of the things the Nothing represents is the ideological threat of white supremacy and white supremacist violence against marginalized communities. And lone wolf shooters are its personification, even though they are far from lone; they are part of a vast network of radicalized whites who actively promote the genocide of minorities.

The American president’s ongoing anti-immigrant rhetoric about “invaders” and “invasions” has been stoking the misplaced despair of white folks who mistakenly think they are losing their country to people of color. Because of this, Latinx families are being separated without plans for reunification. The Trump administration proposed a Muslim ban even though the majority of terrorist crimes in the United States are performed by white right-wingers. Unarmed Black men are being gunned down by police, and law enforcement is complicit in upholding much of the racist rhetoric being shared daily by the president. After all, the America as we know it was founded on the notion of white supremacy. This “despair” and spiritual Nothing based in white nationalism is leading disgruntled white folks to hunt down those they perceive as threatening the white world order they feel they are owed.

You can see the Nothing in the dead eyes but beaming smiles of Trump and Melania as they hold a baby orphaned by Trump’s own racist calls-to-(white)-arms in El Paso. Trump giving a thumb’s up to signal that his divisive rhetoric has been successful is further evidence that the darkness in his soul is pervasive and fundamental. “I really don’t care, do you?” is one of the First Lady’s signature catchphrases.

Mass shootings in schools, festivals, churches, synagogues, movie theaters, and so many other public spaces have people — in particular minorities and marginalized folks — terrified to exist outside of their own homes. Yet, only a few people in power are willing to call any of this terrorism when it clearly fits the legal definition.

But the Nothing and its devastating presence as represented by the Trump regime doesn’t only extend to destructive white nationalism. They have rolled back environmental protections helping curb climate change. Offshore oil drilling has resumed even as it risks people’s access to clean water as well as environmental damage. They have undone protections for LGBTQ students in schools. People are dying while rationing their medicine because of new policies that favor pharmaceutical companies rather than American citizens. The Endangered Species Act is being gutted, as well as protections for national parks. And so much more. The Nothing isn’t just a threat to Fantasia anymore. It’s a threat to life here on Earth.

When The NeverEnding Story comes to a close, we learn that Atreyu had lived his part of the story many times before. The fight against apathy and hopelessness is a story that never ends. Unfortunately, the lone wolf as an agent of the Nothing embodied by today’s mass shooters and the political regime that encourages their violence is a modern reading of this narrative that only makes The NeverEnding Story even more relevant and timeless for its 35th birthday. For people of color, fighting white supremacy is also a never-ending story.

The NeverEnding Story hinges on the Empress (Tami Stronach) needing and getting a new name to save her world. In our current human story, we need people in power to have the courage to call things by the name that already exists. In the case of lone wolf white supremacist shooters, that name is “terrorist.” Use it.

P.S. For a slightly more hopeful reading of most beloved The NeverEnding Story, click here.

The Impact of Gun Violence on Black America