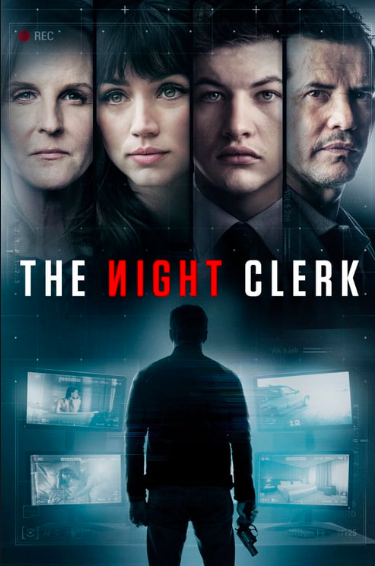 For moviegoers fond of watching films in which a protagonist battles the inner demons that lie within the subconscious but ultimately affect what is real, The Night Clerk delivers such a story.

Bart Bromley, who has Asperger’s, played by actor Tye Sheridan, uses his unique method of understanding those around him to solve a murder that takes place at his workplace. While relying on internal senses and worldly observations to scope out hotel guests, Bart finds himself uncovering way more than he bargains for when he becomes a suspect in the crimes he’s spent his shifts observing.

Watching evil unfold through the eyes of a young adult on the spectrum intensifies the film by filling the plot with feelings of manipulation, trickery, and deceit. These tactics contribute to and challenge viewers’ thinking. These techniques allow viewers to analyze what did in fact occur or what events in the film were exaggerated by the director to heighten the theatrics of the film. The heightened elements of trickery, deceit, and the burgeoning romance between the hotel clerk Bart and the guest Andrea, played by Ana de Armas, allows viewers to wonder whether certain events were exaggerated.

Unlike other dramatized films with a semi-predictable plot in which a male protagonist wins the heart of his love interest through his heroic work, Cristofer’s The Night Clerk separates itself from this overused narrative. In this crime-drama, there are several occurrences in the movie that make it appear as if Bart wins the love and affection of Andrea. The filmmaker has the audience convinced that it is Bart’s quirkiness that Andrea ultimately falls for, thus contributing to her siding with him. This makes Cristofer a unique storyteller. He is able to manipulate his audience’s initial thought process until the end of the film. Viewers are led to believe that Bart and Andrea solve a crime together and they end up together.

Bart is a tough character to analyze because his actions suggest that he is set to be the villain of the film. He is watchful and has cameras placed where they shouldn’t be, and that in itself is a criminal act. Bart is on the spectrum and is still discovering details about himself as the film progresses, and so are the viewers. There are several scenes in which Bart appears to be both the perpetrator and the victim of the violent crimes that occur at the hotel. These elements all add suspense to the film and complexity to the character’s development. While there is blood on his hands and he is being interviewed by the detective, viewers can believe that he is guilty of something. This tactic goes back to the filmmaker using Bart to manipulate the audience. Because he is on the spectrum, when Bart works with investigators, his lack of communication skills makes him appear suspect. Bart is able to adjust his mannerisms based on the circumstance and whom he is interacting with. When he interacts with the investigator, he does not want to speak. Instead, he smart talks himself out of the situation.

The Best Films Lead to Reflections

The best films tend to lead to reflections, and The Night Clerk is by far a 4-star film that gets one thinking. Cristofer avoids a cliche conclusion by allowing the character to come to terms with himself and the world around him. Viewers see Bart interact with outsiders by attempting to make cordial greetings. One may ask, why is this important? Why couldn’t the film conclude like other cliche love stories in which Andrea and Bart would most likely leave together after busting the bad guy? “Winning the girl” may be the love story that viewers expect, but it is not the story that Bart needs.

The effect of escaping from this narrative allows the protagonist to grow and learn something from himself and Andrea. If Andrea served a purpose in the film in relation to Bart’s development, she was there to reassure him that it is okay to speak up. Bart speaks up by going against the detective who deems him uncooperative during the crime investigation. Bart also speaks up by going against Andrea, the girl the audience is led to believe he would run away with at the end by leading detectives to the perpetrator. Ultimately, The Night Clerk is a film that presents itself as one that has a predictable plot but surprises viewers as the film concludes.