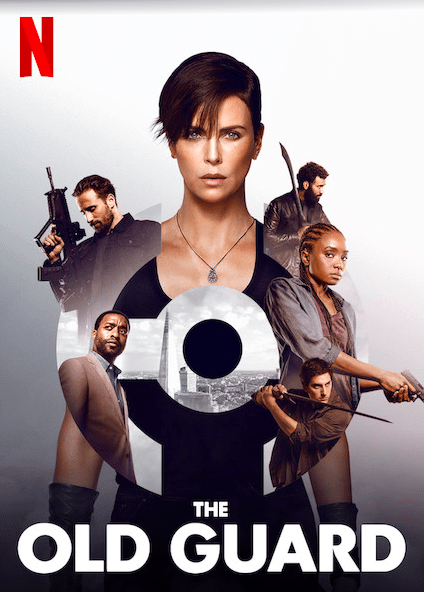 The storyline kicks off right off the bat with a murder scene of soldiers, with a female narrator indicating she has been here before many, many times but wonders when it will all end. Andromache, known as Andy (Charlize Theron), meets three men at a hotel for their next combat mission. She hesitates about this new mission until she and Booker (Matthew Schoenaerts), her team member, meet former CSI agent Copley (Chiwetel Ejiofor) to discuss rescuing kidnapped children in South Sudan. Andy and her team of three men are on a hunt to save the children. Upon their arrival in a deep cave filled with bright lights, Andy realizes it’s an ambush. All four are shot to death with hundreds of bullets. This part of the scene takes us back to how the film first began, a murdered scene of Andy and her men.

That is when unexpectedly the four wounded soldiers rise and fight their attackers. If you have guessed by now, Andy, Booker, Nicky (Luca Marinelli), and Joe (Marwan Kenzari) are immortals. They are historic warriors who recover from their wounds again and again. Now they’re off to seek revenge on Copley.

Meanwhile, Nile Freeman (Kiki Layne), a U.S. Marine, also recovers from a near death experience during a military mission in Afghanistan. Nile has many questions about her survival and so do the other soldiers. How is it that she does not have a scar on her throat, or better yet how did she survive? Andy and her team see Nile in their dreams. It’s a message to locate Nile. Will Andy convince Nile to join her team to protect their identities altogether? Will they encounter betrayals? Who wants to capture them and why?

Andy and her team of three men contain similar superhero traits like other movies. They have physically fought battles to help humanity all around the world for centuries. This has a slight resemblance to the recognizable and courageous superhero 2017 film, Wonder Woman. She fought in World War I against the German soldiers and saved the innocent people to the best of her ability. Both Andy and her men and Wonder Woman are imperative ancient immortals that viewers truly admire in pictures and crave to see in film.

Additionally, the Old Guard fight together as a team in a way that is common in movies. One popular superhero team, X-Men, is a small team in the beginning, then expands with more new characters. X-Men are mutants, and each team member has their own specialized skills to fight evil mutants who harm the human race as well. Andy in The Old Guard and her team are trained soldiers, protecting one another during their rounds of physical combat against the antagonists. Finally, the X-Men characters, Professor X and Dr. Jean Grey have a fascinating telepathy skill, like Andy and her team dreamed together about Nile, and Andy needs to find her soon. Nile visualized Andy and her teams’ facial features in her dreams, too. Will Nile agree to join Andy’s team? Very few superheroes have this intuition, and it has been seen in films in a positive or negative way.

The Old Guard provides distinctive superhero skills that are quite rare in the film industry. In the first place, let’s be clear that there’s not an actual flashy suit with a cape, nor any type of special powers unleashing within their bodies, like the Superman character fighting a villain, gesturing his bold red power eyes from miles away with the dual capability of using his x-ray vision to read someone’s mind. However, Andy and her team confront their enemies by operating machine guns or swords, with their physical strength by exercising great martial arts techniques. Their wounds are quite realistic and extreme, which is uncommon to see in many superhero films. For instance, Booker was severely immobilized in their once-secret hideout location after his attackers disappeared, showing a large area of his disordered and bloody intestines moving around, forming its correct anatomy so that he can become intact once again.

Among countless of action-packed superhero films, homosexuality has not existed in the past decades. There are very few movies that portray a gay superhero. The Old Guard proudly demonstrates two homosexual characters, Nicky and Joe. Both have fought one another as enemies in ancient wars, and now they are no longer rivals. In one particular scene, both Nicky and Joe have been beaten, captured, and handcuffed by Copley’s soldiers in a cargo van. Joe French kisses Nicky in front of the group of soldiers until forcefully separated. Many superheroes have a love interest, such as in 2002 Spider-Man film, Spider-Man loves Mary-Jane. But usually these love interests seem to constantly change from movie to movie for different reasons. Nicky and Joe illustrate their love relationship in multiple scenes.

Saving the Old Guard’s identity and not exposing it publicly is their main priority. Andy and her team prefer to be discreet about their immortality at all times. They don’t find it necessary to be rewarded or deserve any praise. They simply know to take action when humanity needs support. In 1989 Batman film, he is a vigilante in the same manner as Andy and her team, but she and her team battle to remain unnoticeable through centuries. Yet, Gotham police request Batman’s assistance to fight criminals by beaconing the famous bat signal shining bright into the sky. In addition, Gotham Globe newspaper highlights Batman pursuing delinquents, and Gotham civilians are aware of Batman’s existence.

We love our classic heroes, but Rucka and Prince-Bythewood have reformed their superheroes in this new film. Many fanatics can’t get enough of these brave warriors with their extraordinary abilities that make these flicks mesmerizing.