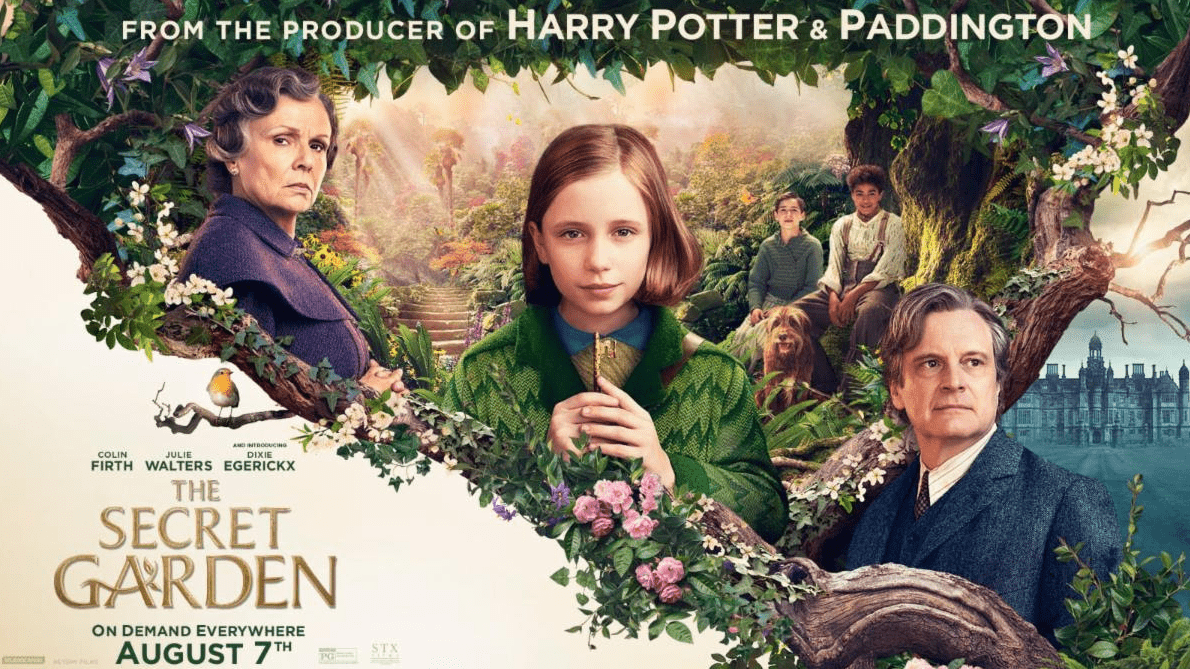 STX Entertainment and English film director Marc Munden (National Treasure, Utopia) bring us a new big-screen adaptation of The Secret Garden, based on the novel by Frances Hodgson Burnett.

The film stands out from those that came before by bringing the setting closer to home while remaining true to the messages and themes of the original story. With little easter eggs that pay homage to the book, The Secret Garden is a beautifully shot film full of positivity, heart, and spirit. Pushed to the 1940s, away from the Edwardian fashion, this film is for the new generation of children who have missed out on the magic, comfort, and friendship the story embodies.

The Secret Garden follows 10-year-old Mary Lennox, played by Dixie Egerickx (Genius, The Little Stranger) as she grapples with the sudden loss of her parents. Deserted and alone, Mary is sent to live with her uncle Archibald Craven, played by Academy Award winner Colin Firth (The King’s Speech, Bridget Jones’s Diary).

On her uncle’s remote country estate, Misselthwaite Manor, deep in the Yorkshire moors, Mary explores and uncovers many secrets, one being a magical garden. The film also features Julie Walters (Harry Potter, Mamma Mia) as Mrs. Medlock, Amir Wilson (His Dark Materials, The Kid Who Would Be King) as Dickon, Edan Hayhurst (Genius) as Colin Craven, and Isis Davis (Guilt, Electric Dreams) as Martha. The film is produced by a slew of people who know a good story when they see one. David Heyman is one of those producers who has produced such films as Gravity, Marriage Story, Once Upon a Time in Hollywood, and the Harry Potter series. The Secret Garden is a film that audiences will fall in love with.

As we push past the mid-point of what has been a very strange year, The Secret Garden gives us a dose of the nature that we have been removed from. Nature is just one of the many themes that flow through this film. The themes of magic and magical realism, weave through the development of the characters as well as the plot.

The cool thing about this adaptation is the way Mary Lennox’s imagination and the world around her are fluid and molded together. This creates stunning images and contrasts of light versus dark. The magic of the garden referenced in the book comes to life on screen.

Costume designer Michel Clapton helps bring the story to life with the use of magical realism and Mary’s costumes. Clapton has worked on titles like The Crown and Game of Thrones. Mary’s outfits go through an evolution of their own. Moss grows on Mary’s coat. Flowers begin to bloom from her dress. Butterflies emerge from her dress and fly away. Moss as a magical plant is associated with perseverance, patience, nurturing, and grounding. The deliberate use of these simple elements as metaphors is what makes the film so fun to watch.

Nature is at the center of the film. It’s nice to see real versions of it, rather than a set built for the occasion. Part of what triumphs in this film is the natural beauty that leaps off the screen. The cinematography and editing are fantastic. The use of real places made to look like one magical location captures the audience’s attention. At a time when traveling is very limited, we get to see nature at its best. The film highlights an array of gardens in the United Kingdom. The audience is sent to the North Yorkshire Moors, Laburnum Archand  the meadow stream of Bodnant Garden in North Wales, the subtropical Trebah Gardens in Cornwall, Puzzlewood in the Forest of Dean, and the terraced gardens of Ilford Manor in Somerset.

While nature and magical realism speak to the childlike nature of us all, it’s the theme of nature and mental health that speak to the adults in the audience. It’s the film’s topics of abandonment, death, grief, and isolation that speak to viewers. It’s the way nature and mental health have a place in each other’s world. It’s a restorative arc for a child, but it doesn’t come off as a children’s movie. It’s a story of self-transformation that will appeal to children and adults. The audience will see nature interact with the characters, expressing the emotions they feel. The act of being in nature as been shown to help with anxiety and depression. We get to see it unfold magically.

Different generations have loved the film renditions of The Secret Garden, whether it’s the black-and-white 1949 version starring Margaret O’Brien or the 1993 Agnieszka Holland version with Kate Maberly. While they may have missed the mark with the appearance of hunchback Uncle Craven, it’s the ideas of triumph, of hope, and life after loss that will be remembered.

TIFF 2021 Review: Love and Loss are Explored in ‘Mothering Sunday’