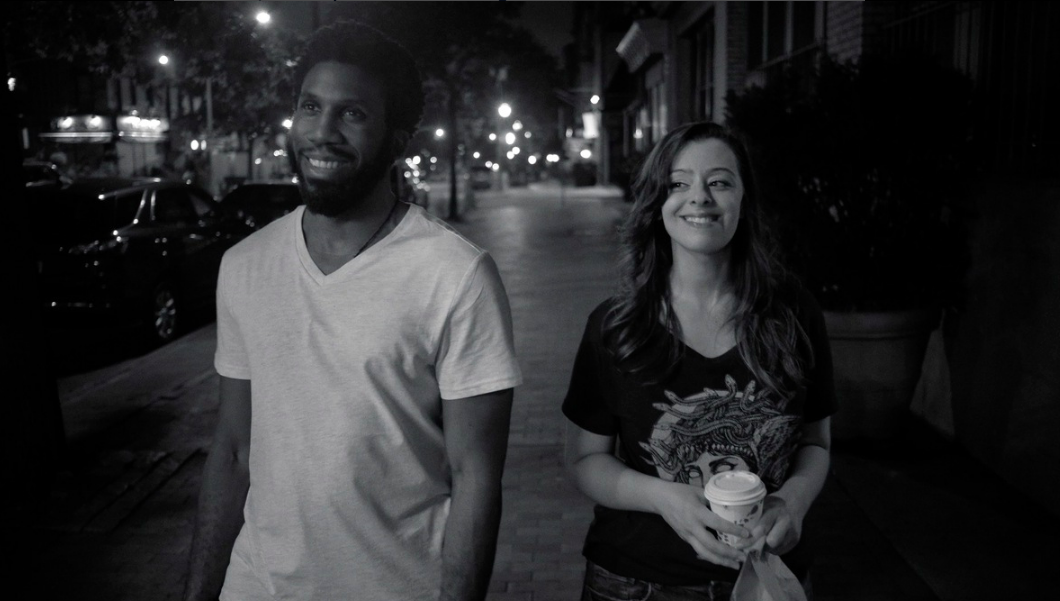 For once a rom-com that ditches the overused “first, vengeful; second, become friends; third, more than friends” predictable narrative in exchange for real conversation and character connections. Who knew that in a simple but natural feeling romantic comedy, dynamics of mental health could be subliminally played out for viewers to notice? The Sleepless is not your average romantic comedy. It is one where the director’s intent is well executed with all character interactions and psychological concepts explored throughout the film.

In director Michael Dibiasio-Ornelas’s The Sleepless, two characters Sophia (Rebecca De Ornelas) and Zach (Nyambi Nyambi), who both suffer from insomnia, happen to meet at 3:00 a.m. at the only place open for coffee. Unfortunately, upon meeting, the two don’t automatically hit it off. With a slight bit of help from the bodega owner Samir, Zach and Sophia wander through the mid-morning hours until one finally departs.

The rawness in  Dibiasio-Ornelas’s work automatically helps to eliminate any preconceived biases viewers may have about romantic comedies. When one thinks of comedy, a bright setting or scenery may come to mind. The Sleepless takes an unconventional approach when it comes to the setting of a rom-com. Rather than feeling exaggerated, which many traditional romantic comedies succumb to, the film begins as if it is taking place in real life. The director’s choice of a black and white film enhances the effect of a late night setting. Both Zach and Sophia can’t sleep. The fact that the film is set in black and white helps to establish that it is in fact mid-morning hours.

When it comes to character development, the audience does not leave with the fullfullment of knowing the status of Zach and Sophia. With other romantic comedies, it becomes transparent midway through the film whether the romance of the protagonist and antagonist with fail or thrive. In many of the scenes viewers, get a more relaxed conversational tone between the two characters Sophia and Zach. So it is not evident whether their relationship will prevail after their sleepless night.

Both characters Zach and Sophia are damaged by their mental demons. In multiple scenes, it’s difficult to determine Sophia’s intentions more so than Zach’s. She is quick to anger and break away from the calmness that is once established.By eliminating the obvious factor from his film, the relationship between the two characters appears authentic and supports the realism that the director was trying to portray. There is no fake energy or rush between the pair to reconcile and become partners, which is a common theme in romantic comedies. 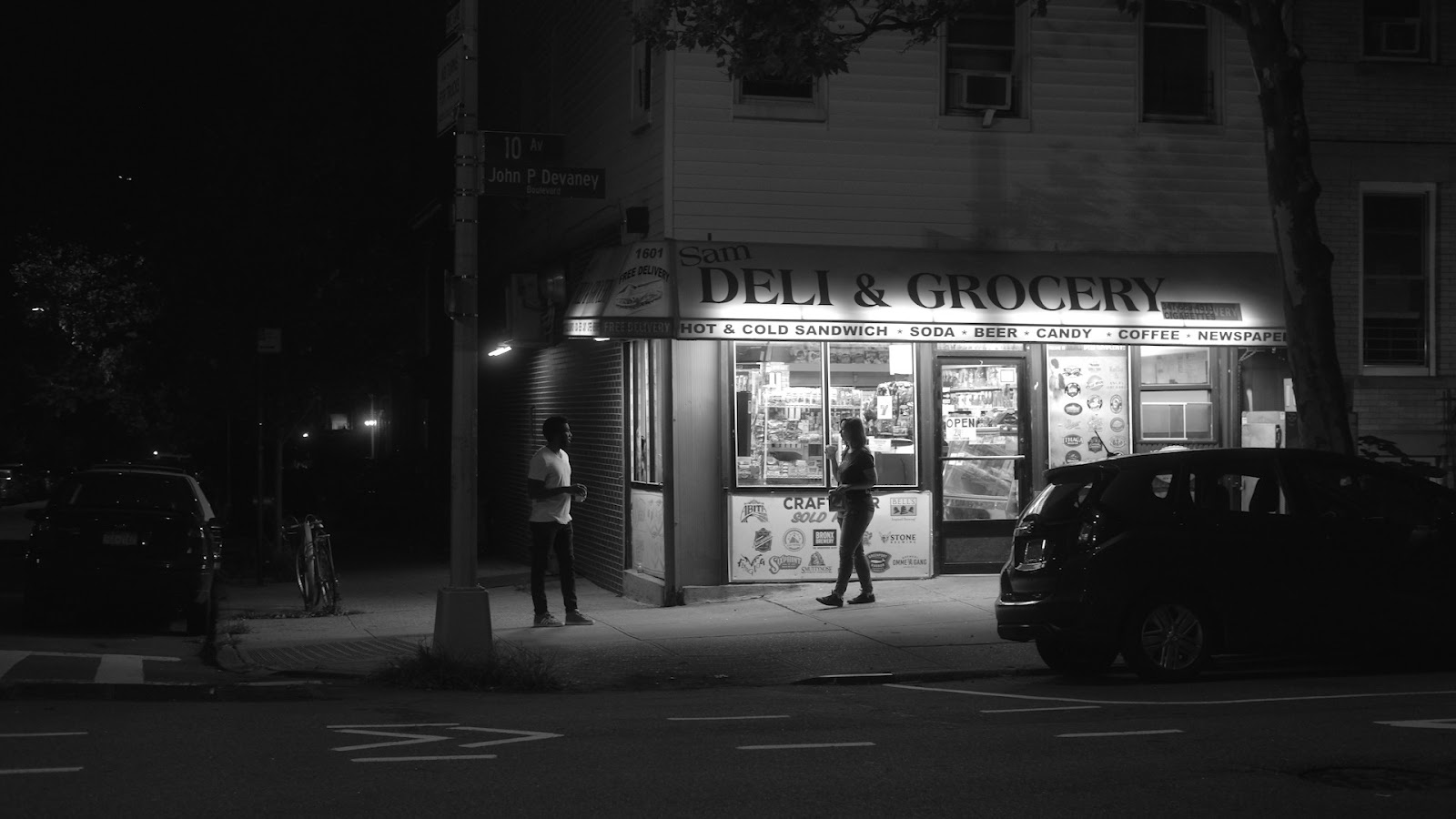 Although the synopsis remains static with two characters who can’t sleep, the realism present in the film sets the perfect tone to subliminally introduce concepts like mental health, addiction, and social constructs to the film. Once the characters first interact as they reach the counter of the bodega, the casual conversation and nonchalant interaction when the owner mistakes Zach and Sophia for a couple simulate a real life event being filmed. This scene along with many others appear like real life because they give off natural raw vibes versus acting for a camera.

As Zach and Sophia begin to get acquainted with one another and somewhat get comfortable expressing themselves, casual conversation leads to deeper issues and the concepts of mental health and addiction arise in the film. The root cause of their insomnia and the mental impact behind it is something they both openly share. What’s unique is that in most cases what would seem like oversharing instead forms a commonality and a bond between Sophia and Zach. Because this is not a traditional romantic comedy, the synopsis remains static and the real world relatable, and serious issues arise that draw the two main subjects in the film closer together.

Dibiasio-Ornelas designed this film as one long night conversation between a man and woman. The conversational tone and hard-to-predict relationship status doesn’t appear to leave much room for comedy, given everyone is in on the comedy except for the characters themselves. From the accordionist in the park to the bodega owner Samir, the outside characters poke fun at the assumption and possibility of Zach and Sophia as a couple. This lightheartedness is of the essence because it instills trust in both characters and allows them to free their thoughts, specifically Sophia so that she can talk about her depression and dissatisfaction with life. What’s peculiar about this film is that the audience is left to wonder what’s next. The director refrains from the overused plotline for this film and leaves viewers unknowing of where life will take Zach and Sophia as a pair. Perhaps it was just good company that they both needed to distract them from their lack of sleep and empathize for one another.

The Sleepless is more than just your average rom-com. Once the concept of gender, mental health, and addiction come into play, it perfects the narrative of a conversational film. Black and white scenery, conversation, and revelations of dark struggles, romance, and comedy are not overt as Zach and Sophia interact. Despite there being a dominant motif that Zach and Sophia are in a relationship, which minor characters assume, the director excludes all possibilities of a cliche love/hate sequence from existing in this romantic comedy.

The Sleepless is now available on video on demand.