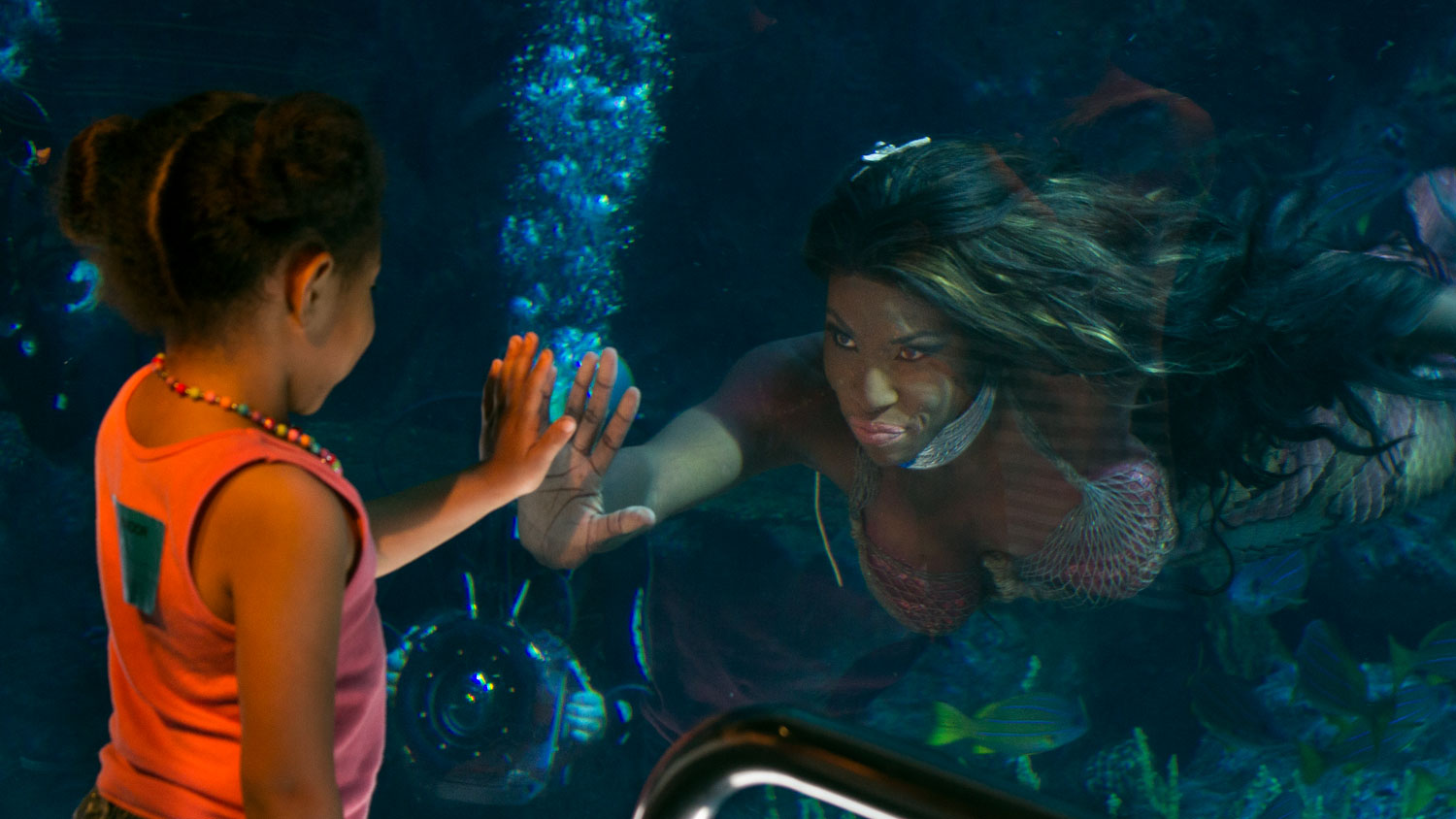 Growing up in Barbados, I lived a short distance from the sea, and at least once a day drove past the stretches of open, sandy beaches. For me, Sundays were beach days; they were days I got to play, snorkel, and a few times scuba dive into the sparking blue depths of the Caribbean Sea. It was during these moments that I entertained my secret wish to be a mermaid.

As I grew older, and continued my weekly beach trips to swim among the multicoloured fish—and the occasional Hawksbill Turtle—there was one thought that marred my enjoyment, and that was “there are no Black mermaids”. The only reference I had was Ariel from the Disney cartoon, The Little Mermaid; there was no representation of me as one of my favourite mythical creatures.

Now as an adult I finally have the opportunity to see of one of my secret nerdy wishes come true, in an independent short film called The Water Phoenix, the story of Anya, a mermaid trapped in a vaguely familiar yet essentially foreign environment. The Water Phoenix is a passion project years in the making by first time director Bola Ogun, who also wrote the script and stars as Anya. I recently had the opportunity to talk with Bola—and I’ll confess ‘nerd out’—about her living my dream. 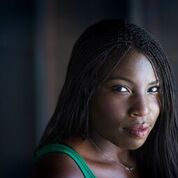 BGN: Bola can you tell me a bit about yourself and how you became involved with the film industry, and working as a Production Assistant on films such as The Dark Knight and Neighbors?
Bola: I started in Dallas, Texas, I was looking for PA work and there happened to be a couple of productions … I started with Walking Tall [2 & 3], then onto Prison Break, after [Prison Break] I worked on Friday Night Lights in Austin; those are the three I worked on in Texas. Afterwards I moved to L.A. I only had four contacts and I reached out to all of them, but only one or two came through, but that was all it took.

My first project that I was a PA on after moving to L.A. was Get Smart, that’s where it started—as freelance work. You work on one project, you meet other PAs, ADs (Assistant Directors), and you just keep working on other things. I was lucky to be one of those people that could straddle the film world and TV line as well, because as I worked on True Blood, Desperate Housewives, and so many other projects, they happened to lead from one thing to another. I worked on Battleship, then the next year I did The Dark Knight Rises, then two years later I did Neighbors, so that’s how I got started in the industry, and I did that for a long time.

BGN: What was it like being on a set where you were the person in charge of everything?
Bola: It’s intimidating, it’s intimidating and frustrating because I didn’t have the money. [The Water Phoenix] is super low budget, and I don’t think people realise that because it looks like it has a high production value. Being in the industry I cultivated relationships and a lot of them came through for me. I’ve talked about this film for a long time, it took a while for it to come out because it was so low budget, but that was because we took our time with it because we wanted it to be good. You know there is the saying of ” You can either have it fast, cheap or good” and you can only have two of those things, it can’t be all three.

Hopefully it’s good, and it was cheap, but what that means is it took a long time to finish. If this was a “real” studio film and I was wearing all of those hats, I might not have been quite as overwhelmed as I was. I would’ve had a Line Producer that was there from beginning to end, who would take care of some of the minutia of the departments. Before we began shooting, I was dealing with insurance issues, I was trying to find crew members to fulfill certain roles on set…those are things that if it was a bigger budgeted movie, I would not be dealing with myself. Circumstances being what they were, it was my passion project so that’s what it took to get it done.

BGN: What was your inspiration for Anya and this particular subject matter?
Bola: I started wanting to do a short about mermaids, something that would stick out for the Directing Workshop for Women at AFI (American Film Institute); I wanted something that would stand out. We’ve seen zombies, werewolves and vampires a million times, and I thought we hadn’t really explored mermaids. Mermaids are huge now, but when I was writing, no one had really done it past Splash, and I wanted to make a character, something that was real and not so much rom-comedy. It’s a completely different story – it has the idea of being betrayed by somebody that you love and then going back home. It has those kind of broad strokes, but the way it’s done is different. When I was in the [AFI] workshop is when I started to hammer out what the story really is, because it was very much like a director’s reel [in that] there was no real diving into a story or the emotional side of it…they hammer in that [the basic story] is the most important thing, the flashy stuff can come after.

I was working through some personal things when it came to my relationships with men and what I thought it was supposed to be versus what it actually was. For me I found a way to harness that to make the story true, and essentially it’s just an allegory – an allegory of somebody believing in the idea of someone coming to save them from whatever prison they’re in. In the short, it’s a physical prison but the allegory is an emotional prison of feeling like you’re either in a depressive state or there is this feeling you have of a cloud hanging over you. But if you just have this one person come and be with you it will go away, and when that doesn’t happen, what do you do?

BGN: How did you prepare for the physical aspects of Anya? I imagine it was a physically demanding role and the costume was very heavy to wear and maneuver around in.
Bola: I started swimming when I was eighteen after arriving at college. There was a pool at the local rec centre. I was no longer playing volleyball and needed something to do, so I picked up swimming. I joined the club team, did the masters swimming and got really good at it, so all I needed to learn for this role was how to scuba dive and learn how to freedive. For the freediving I had to learn how to hold my breath a certain way to not only use the Scuba Regulator, but also hold my breath in a way that wasn’t dangerous. All of the scenes that take place with me underwater in the tank is me freediving. I would take a deep breath, dive down, do the take and come back up for air.

The scuba diving (training) was the most extensive part because it takes longer, as you’re only doing it once or twice a week. In the beginning you start training in the pool, then you do your three dives out on a boat. We went to Ventura and towards Catalina for three different dives, and during those, you do two dives to get the certification. For the freediving, you just kind of do it on your own. I was disciplined about it, going to the pool on my own. I had help from Robert Short, who created the tail Daryl Hannah wore in Splash; he was a huge part in creating the tail for the short. He gave me a training fin to use when I was on my own in the pool. So I would say it tool close to three months  total in physical preparation.

BGN: Now that you have completed The Water Phoenix and you’re promoting it on the festival circuit, what is your next step as a writer and director, are there any more projects you’re working on currently?
Bola: I just locked picture on my next short called Are We Good Parents?; it stars Tracie Thoms from Rent and American Gods and Sean Maguire, who was just in Once Upon a Time. Are We Good Parents is about a couple who believes their daughter is gay until she tells them she is going to the dance with someone named Ryan. They’re freaking out about their parenting skills, and wondering if they did anything wrong and how to fix things, it’s really good and I’m really excited about it.

BGN: BlackGirlNerds, in collaboration with Netflix, recently launched a Twitter campaign using the hashtag #FirstTimeISawMe, where people (Black women in particular) were invited to say what TV or film character we first identified with. Who would you say was the first representation of you?
Bola: Maxine in Living Single. I loved how sassy she was, but it was mostly that there was a dark skinned woman like me. In the 90s I think they did a better job (of representation) than now, she was the first. I saw the hashtag and I was thinking about it “oh that’s a great question”. Besides Laurel Winslow, because I didn’t really feel like her, but with Maxine I was like ‘that’s me’.

The Water Phoenix recently had its premiere at the LA Shorts International Film Festival, and will have its next showing at Ryan Murphy’s HALF Fest Director’s Showcase, August 26, 2017.