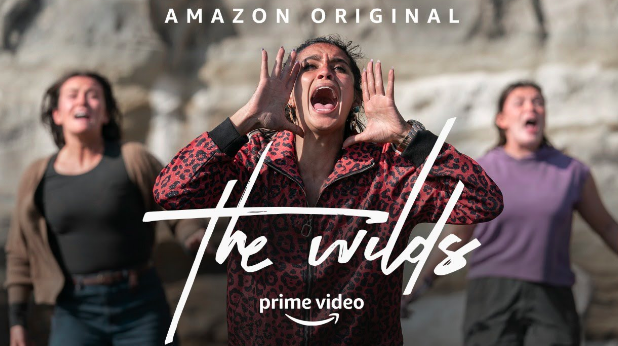 Leah (Sarah Pidgeon) sits as she is spoken to by agent Dean Young (Troy Winbush) and therapist Daniel Faber (David Sullivan), who have questions about her experience. Leah is covered in bruises, scars, and is obviously guarded. As she starts her story on why she left her life, we watch the other girls live through their daily lives, which aren’t the greatest when it comes to teenage experiences. Hers is of a love that is lost.

Flashback to when Leah is on floating debris screaming for help. Agent Dean asks her about the program “Dawn of Eve,” which Leah informs him is a summer program where her parents sent her to deal with her relationship. While out in the ocean, she finds another passenger, Jeanette Dao (Chi Nguyen), whom she met on the plane along with Toni (Erana James), Martha (Jenna Clause), Fatin (Sophia Ali), Dot (Shannon Berry), Rachel (Reign Edwards), Shelby (Mia Healey), and Nora (Helena Howard). On the plane, Shelby sets up the girls so that they can get to know each other. Leah gets along with Martha, Fatin and Dot clash over feminism, Jeanette is over perky as she talks to Nora who is focused on her sister, Rachel is annoyed with Toni’s lack of discipline. Shelby’s imperfection shows when she steps out to fix her mouth guard that is false teeth.

When the plane starts to go through immense turbulence, everyone reacts a different way while Leah continues to read a book with love notes written within. The author of the book, Jeffrey Galanis (Carter Hudson), had previously visited her school. She had dinner with him, then drove him home. Why a child was asked to drive an adult home is beyond me.

The rest of the girls woke up on the island shore, freaking out or arguing with one another about why they were in the situation, or being saved by each other. Jeanette stops breathing, and Dot attempts CPR but doesn’t know how. Everyone else does. Agent Dean asks for Leah’s reason for being in the program. Leah informs them of her flirting with then having an affair with Jeffrey.

Jeannette checks on Leah then hugs her, apologizing for reasons unknown. Dot finds a phone that she buries in the sand. Shelby takes charge to find resources. Toni joins her due to the jealousy that she has of Martha’s attention to Shelby. Nora and Dot organize items found, and Leah reminisces over the time she lost her virginity and then he annotated the book she had.

Some weeks later, Jeffrey stops by Leah’s house to inform her that he was mailed a copy of her birth certificate by someone. He breaks things off with her, considering that she is about to be 17. Fatin’s suitcase washes up on shore. She is happy to get ahold of her makeup and clothes. Toni, annoyed with Shelby’s praying and nature, hits her with a branch, causing her to bleed. Nora finds that the phone is working but only with one bar and barely any battery. Each girl tries and fails to call people who could be concerned for them. Fatin gets it to ring but then the phone dies. Leah is the only one to notice when Jeanette walks away. She then coughs up blood and falls down, dead.

The girls carry Jeanette away from the camp and bury her. Shelby, an ordained youth minister, prays for her, then immediately, out of nowhere, Leah sings Pink’s “Raise Your Glass.” The other girls join in as they finish burying her.  Later, around the campfire, Nora informs the group she plans to search for a way to get them help, Fatin shares her dry clothes to keep others warm, and Shelby suggests that they play “never have I ever.” While she is sitting alone, Fatin asks Leah who she lost her virginity to.

Daniel suggests that they stop for the night when Leah decides to inform him that the first night while everyone else was asleep, she heard a phone ring and it was in Jeanette’s pocket. She dug it out and called Jeff but didn’t say anything, just listened to him until the phone died. Leah asks the two men if Jeff ever reached out to find out if she wa okay, through tears.

Gretchen is picked up by an employee where she is told that Jeanette is dead. At the office, she asks for further information and if the other informer is still alive, then she watches footage on the screen of the girls.

If anything, this pilot episode tells us that the show is not going to be an easy ride for us. We already deal with underaged relationship and death of a teenage girl. The worse is that it all seems orchestrated by an organization. That is freaky.