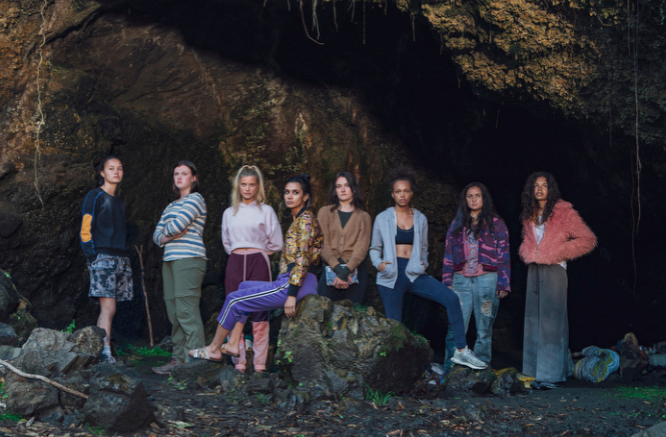 Dot slides in with an ice cream cone in hand as she dances to a song that she is listening to. She bumps into Dean and Daniel who greet her. The girls suffer under a horrific thunderstorm when Dot has them under a raft. Then they realize that they are dealing with sand fleas. She is telling her story as she indulges in the best of junk food.

After the rainstorm, Dot wants the girls to build shelter but Fatin isn’t interested. Nora, Rachel, and Leah leave to search for anything useful from the wreckage. When Dot looks for a shelter such as a cave, Shelby goes along to “watch her back.” On the way, Shelby brings up Dot’s dad being sick, but Dot doesn’t want to go into it. Shelby’s true intentions are to figure out why Dot told the group that her boyfriend was cheating on her. Back in their hometown, Dot was somewhat of a drug dealer, whose customers happened to be kids from her school, as well as Andrew, Shelby’s boyfriend, who was caught by Dot cheating.

When Dot arrives home, her dad is on the couch watching TV. His nurse Mateo (Jose Velazquez) informs her that her dad got sick and needed to be moved. He also warns Dot that the oxycodone is suspiciously low and she needs to be more careful dealing.

While Nora, Leah, and Rachel swim towards the wreckage, Fatin goes through the book Leah holds close to her when Toni rants about her feelings toward Shelby and Martha being friends. Fatin’s reaction isn’t what she was hoping for. Shelby finds a bit of a small cave that she explores, then acts like something has a hold of her. Dot pulls her out and admonishes her for it. Something flies into her mouth, which causes Shelby’s guard to fly out her mouth, so she runs.

While out alone, Toni finds a test dummy somewhat buried in the coast. Daniel asks Dot why she didn’t go after Shelby. Dot admits that she is just tired but not that she is tired from having to physically take care of her dad when the nurse wasn’t around. On Christmas Eve, her dad points out that Mateo was working on a holiday just to see her. They exchange gifts. She gives him a photo of their first rock concert together, while he gives her an all girls’ retreat, which she isn’t happy about because she needs to care for him. As she does laundry, frustrated, Mateo talks to Dot about her dad’s health and how she needs to figure out what she wants out of life. She kisses him and admits that she can’t.

Back on the island, Dot hears Shelby screaming for her. Dot finds a rattlesnake in front of Shelby then quickly kills it, slamming it over and over on a rock while screaming about what she was supposed to be doing.

The girls find a portion of the wreckage. Rachel goes down first to check things out, then asks Leah to go down with her to look around but refuses to let Nora join her. While down there, they find the black box. Rachel has her and Leah go down to retrieve it.

Fatin reads Jeffrey’s notes to Leah to Martha, then gives her relationship advice that is more sex advice. Martha doesn’t have any experience in that department. Toni arrives with the mannequin. Leah is struggling to stay underwater to retrieve the box. Rachel pushes for her to keep trying, even to the point of pulling her back when she leaves for more air. Shelby asks for Dot not to tell the group about her dentures. She opens up about a beautiful sunset that she experienced with Andrew on a mission trip; while she was enjoying the view, his response was to try to grope her. Ugh, why. Shelby acknowledges that Dot’s dad is dead.

After the dad’s death, Mateo visits Dot with information given to him by her dad. It is Gretchen’s information. She is willing to help with CPS and other stuff. I guess she is the other informant.

Shelby and Dot find a huge cave. They make it to the group just before the other three come with the black box. Gretchen meets with Leonard over drinks to discuss the girls’ progress when they are briefly interrupted by a woman who voted Gretchen out of her previous position, it seems.

The girls discuss on what to do with the black box. Rachel is aggressively against them opening the box, which Leah whispers toward Fatin that she almost died because of Rachel’s intensity. The girls vote over what they need to do with the black box. They find the recording on what happened with the flight and Leah plays it. After listening, they realize that they all should have died. As they pack up their items, Fatin tells Leah that she has been reading the book and upsets Leah when she points out that the author is kind of pervy.

Dot watches the sunset, looking out for the green light that Shelby mentioned. She thinks of the spring day that her dad asked her to euthanize him. He informs her that he made sure that she was taken care of and begs her to help him. Dot plays the Christmas song that he loves then injects him. He expresses his love for her then informs her that the world will come knocking. She sees the green light at the sunset and cries. We later see Dot meeting with Gretchen, who is promising to pay for her trip and keep CPS away from Dot until she is 18, but Dot demands to know what Gretchen wants from her in the end.

Each backstory of the girls gets worse and worse. I can’t imagine having to take care of my father, feeding, cleaning, and wiping him, all in my teenage years without any assistance. All while having to go to school? It would be way too much for anyone to cope with. Not to mention having to euthanize him? This is pretty rough. Gretchen really preyed on Dot for her own benefit. I want to fight her.