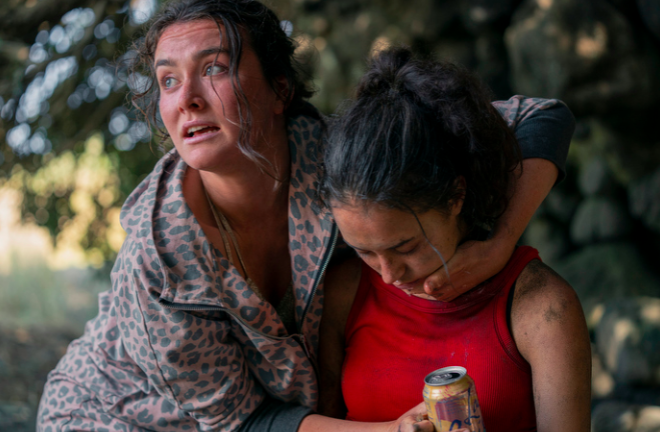 Gretchen is led by Tom to a car where Jeanette’s body is being held. She sits in a bedroom of a psychiatric institution, where she repeatedly scratches her neck and informs the person in charge on intake that she is struggling with anxiety and self-harming behavior. She hands over her keys, belt, and phone, then is informed that she won’t be seeing the doctor until tomorrow. Gretchen isn’t happy about this.

Leah lays on the bed in her room when she is visited by Daniel who gifts her with word and number puzzles before diving in on her agitation and behavior. She questions him about when they will be able to leave but is upset with his ready answer. He calms her with an offer to talk. Leah admits that she misses the other girls, stating that at some point they were all getting along, working together, except Leah who was struggling with dark thoughts. Nora interrupts her thoughts with a dirty joke and an offer to speak to her or write things out to detach from everything. Daniel asks if that ever helped her, which she admits was different from what she used to do with a diary, writing every emotion.

We get a montage of cute beautiful moments that Leah has with Jeffrey before she is interrupted by her friend, Ian (James Fraser), who thanks her for coming to a camp retreat with their classmates. Later, the two chill out in her tent, enjoying the view of her moon roof when Ian reaches for her hand, which leads to the two making out. Leah begins to cry while they are kissing but quickly stops and apologizes for it. Ian voices his opinions on Jeff and the way she treated Leah, which upset her to the point that she leaves.

On the island, Leah writes everything she sees, which includes Shelby, who happens to be walking away from the camp. Leah thinks it is weird and suspicious. Rachel arrives with a bag of mussels, which the pack enjoys, except Shelby doesn’t have any because she’s allergic. Toni eats through quite a bit, which everyone notices, so she acts silly stating that the mussels look and feel similar to a woman’s genitals, then licks one down. Everyone but Shelby cheers her on until Shelby yells for her to stop. Toni calls out Shelby for being homophobic, which Martha doesn’t believe until Shelby states that she doesn’t agree with Toni’s lifestyle. Toni storms off while everyone else stares at Shelby and Dot points out that her way of thinking is wrong.

Later when she helps Martha with cleaning clothes, Martha informs her that she can’t be prejudiced towards someone because of who they are. Immediately, Martha vomits, then Shelby notices that all the other girls are getting sick too. Tom is watching the footage, then calls Gretchen to inform her about what is happening. When Gretchen tries to get out of the hospital help her employees, the nurses prevent her and drug her. Fatin takes care of Toni, who is getting worse, but it seems that Leah and Dot are doing better. However, Shelby has disappeared. Leah is tasked with getting the med bag that they had found earlier, and she catches Shelby walking in the jungle, so she follows Shelby and puts up the bag in the process but it falls.

Daniel questions Leah on what she thought Shelby was doing. Leah’s thoughts are wild, and Daniel points out that she is a bright girl who allows her mind to think the worse and follow that train of thought.

At school, Leah confronts Ian, accusing him of sending Jeff her birth certificate, then insults him for “making a move” demanding that Ian calls Jeff to let him know that he won’t tell anyone what happened. Ian walks away.

Rachel blames herself for bringing the mussels to the group but Nora tells her to not think that. Toni isn’t getting any better, while Leah finds that the contents of the bag spilled into the ground. She desperately picks every pill out. Daniel points out that her mistake came from several factors such as delirium and dehydration, as well as that not being the first mistake that she made that night.

Leah attends a party but spends time in a car with a guy. He invites her to hang out at a lake the next day and admits that he has a girlfriend.

Dot is desperately looking for stronger medication for Toni and Martha but only finds one. Leah acts as if she doesn’t know what happened. Shelby forces a pill down Toni’s mouth when she refuses to take it from Shelby.

Leah leaves the guy and the party, listens to music, and dances in the middle of a dark street, without paying attention to the road, and ends up getting hit by a car.

Martha isn’t doing so well so she walks to the water to cool off but passes out.

While hospitalized, Leah overhears her parents talking to the doctor about her condition, which includes her mental state. Daniel says that Leah is obsessive, which can be a threat to her.

The pack carries Martha closer to the camp fire. Eventually, Leah admits her mistake of dropping medication, and Dot demands that she take her to the spot. Daniel points out that Leah’s obsessive behavior is the reason that she holds guilt over Martha’s condition. Leah reacts by stating she feels attacked, yells at Daniel for making her feel worse, and pushes him when he asks about the phone call she hasn’t told people about. A nurse comes in when Daniel tells Leah to calm down. Leah attempts to run away but is held by Daniel and given a shot to calm down.

Gretchen talks to a therapist about her recent stresses in life. The therapist is Daniel, who points out all the indicators of her lying. She gets up, happy at his performance, and offers him a position for her program. Daniel is later seen walking into Gretchen’s office, where she and Dean are impressed with what just happened with Leah. Daniel has concerns over the girl’s feelings when they find out the truth. Gretchen watches footage of Leah, who is laying on her bed, half singing a song that reminds her of Jeff.

So ultimately, the girls were not saved from the island and are still being watched by Gretchen and her employees. The worse thing is that eventually they are supposed to go back to their families. How are they going to explain the trauma and deaths of the girls? Are they even going to go back alive? Gretchen is a narcissist with a God complex.