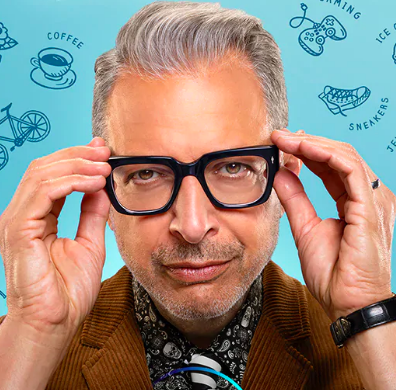 When Disney announced its new slate of TV shows and films to launch on its new streaming network Disney+, seeing a reality series called The World According to Jeff Goldblum already piqued my interest.

In each 30-minute episode of this easily digestible 12-part series, legendary actor and cat daddy Jeff Goldblum leads the viewer on a journey to unravel a world of astonishing connections, fascinating science, and history. And through his extraordinary charisma and charm, he uncovers some of the most mundane subjects and makes them incredibly entertaining to watch.

Take the “Sneakers” episode of this series, for example. Goldblum allows us to follow along through his prism of curiosity the science of sneakers. Who knew that there was even a science to making sneakers, and to be quite frank, who cares?  With Jeff Goldblum at the helm leading us down this episodic path of whimsy filled with jump cuts and colorful fonts — make no mistake — viewers will stay engaged and quickly binge through this series.

In “Sneakers,” Goldblum appeals to our own sensibilities by saying things out loud that we would only think about. He’s amazed by the idea that there is a convention for sneaker enthusiasts called SneakerCon.  He also uses his skills as a charmer to reel us in scene-by-scene like pronouncing the name brand Adidas to AH-DI-DAHS. Oddly enough, he enunciates it in such a convincing way that you believe his way of saying it is correct.

Each episode sheds some light on Goldblum’s formative years, revealing childhood photos and activities that link to the subject he’s covering.

Goldblum approaches each episode with a childlike sense of wonder, but in his idiosyncratic style that brings a smile to your face. I found myself laughing out loud when Goldblum wasn’t trying to funny, but that’s who he is; the actor’s presence alone is simply delightful. Just listening to him purr like a kitten is enough to make you giggle.

The Disneyland of sweet treats and the enemy of my thighs, “Ice Cream” is another featured episode of the series. Goldblum schools us on the evolution of ice cream and why so many people consume it (at least for those of us who aren’t lactose intolerant). Although the series is Goldblum speaking with creators, fans, and people intimately connected with the subject matter, some of the best moments are when Jeff is alone speaking directly to the camera.

There are also tender and endearing moments from Goldblum as he treats a group of military soldiers to some ice cream and asks them to tap into their earliest childhood memory of eating the delicious frozen treat.

In the episode “Tattoo,” Goldblum explores not only the history and the art of tattoos but its culture and meaning in some communities. You can tell as he travels to these places and experiences these various adventures he’s certainly having a good time. May I also add that only Jeff Goldblum can discuss a conversation about jeans as mentioned in the episode “Denim” and randomly break into song.

The cinematic slow-motion shots of Jeff Goldblum smiling as the camera arcs around him is the best kind of eye candy. I’m willing to speak for everyone here by saying this was the reality series we, as viewers of infotainment shows, didn’t know we needed.

My only question while watching this series was, why has it taken this long for Goldblum to have his own reality TV show? In a world filled with cynicism and vitriol, watching a series where Jeff Goldblum doesn’t take life so seriously is refreshing to watch.

The World According to Jeff Goldblum is produced by National Geographic and Nutopia with Jeff Goldblum, Matt Renner, Jane Root, Peter Lovering, Arif Nurmohamed and Keith Addis as executive producers.

The World According to Jeff Goldblum premieres November 12, 2019, streaming only on Disney+. New episodes will stream every Friday.