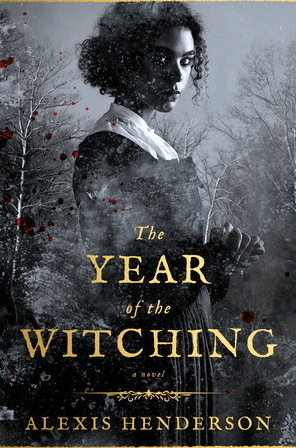 There isn’t much to dislike about novels with strong female protagonists in tyrannical dystopian societies. There’s a reason why stories of female resistance are so powerful, as they remind readers that it’s possible to overcome adversity and defy societal expectations.

In the novel The Year of Witching, Alexis Henderson masterfully combines the bloody trepidation of Black womanhood and the power of women who radically survive in spite of the odds stacked against them.

In this Handmaid’s Tale-like society, protagonist Imannuelle Moore is unjustly cursed and cannot escape her ill-fated destiny. Well, at least not without breaking all of the rules first.

Henderson is a speculative fiction writer who focuses on dark fantasy, witchcraft, and cosmic horror. She grew up in one of America’s most haunted cities — Savannah, Georgia — which inspired her love of ghost stories. To that end, she loves painting and watching horror movies with her feline familiar. Currently, Henderson lives in Charleston, South Carolina.

Her novel thrives so well due to her love of dark fantasy and her vividly crafted storytelling skills.

In the lands of Bethel, where the Prophet’s word is law, Moore is the product of a taboo interracial union that has marked her for eternal shame. However, she discovers that Bethel is its own source of mediocrity, and if change doesn’t occur, its shortcomings are set to doom everyone.

The very fact that Moore is demonized for her “dark powers” and hated for her Blackness unpacks the greater significance of this story. She is viewed as a witch and scorned by society because she is different. Her very existence is a reminder that universalism can be a very dangerous tool of suppression, especially against Black women.

The gothic tones of the novel are heart-shattering, brilliant, and definitely haunting. The supernatural fantasy elements alone are enough to enchant readers, but the novel goes a few steps beyond that, as the Darkwoods begin to represent the literary Sublime.

In literary theory, the Sublime describes the intense feelings and thoughts that emerge from the words and descriptions of a text. In this case, Henderson gives readers feelings that are a mixture of both awe and terror.

She places audiences in a world of grandeur that is also grotesque. Just as the Darkwoods take Moore beyond her reality, it takes viewers somewhere beyond their own comfort zones.

One of the particularly haunting topics that this novel takes on is the struggle of being a woman. Henderson writes, “To be woman is to be a sacrifice.” This not only reflects the corrupt practices of Moore’s duplicitous religious leaders, it also resonates with what it means to be a woman in America.

A diversity of religious doctrines have been historically used to demonize women and command them into submission. The idea of fighting back or resisting is typically accompanied by accusations of heresy and sin.

Moore is certainly marked as unclean and tainted enough times in the novel to make it clear that she, like many other women, never stood a chance in having a positive identity in her society.

By taking her fate into her own hands and risking everything, Moore illustrated the constant pain and loss that women must endure.

The novel also takes on vital issues surrounding sexual abuse within religious institutions. In the similar vein of Handmaid’s Tale, Moore’s story brings to light some traumatic yet important truths. Calling out corruption and abuse while believing and affirming survivors is still often overlooked and even dismissed.

Henderson deconstructs notions of blind allegiance and assimilating into a culture that seeks to manipulate not only thoughts but also spacial autonomy. The Prophet’s law places an undue hold and regulation over the spacial liberties and agency of the girls and women. Moore may only be one of those women, but she is willing to give her life for the greater good.

However, Henderson critiques the narrative in which a woman is always used as a means to save everyone or care for them, while no one cares for her. While Moore is a nurturer, Henderson expresses that she shouldn’t have to be. Women are often forced into socially performative roles due to coercion, not choice.

In addition to the larger messages of the text, Henderson truly allows readers to open their imaginations and ponder more open-ended concepts. It’s too often that many authors feel compelled to explain every little detail, which makes things a little stale. For novels in the fantasy genre especially, it seems really special to offer audiences some intrigue and mystery.

It’s satisfying to fill in the blanks with uncertainty, as speculative fiction often has readers do. Much like life, the novel suggests that there are numerous ways of viewing the same story.

Ultimately, the concepts of the novel aren’t new, but they do provide a storyline that is unique and shocking. For BGN, it was an exciting yet terrifying roller coaster ride through the tyrannical society of Bethel.