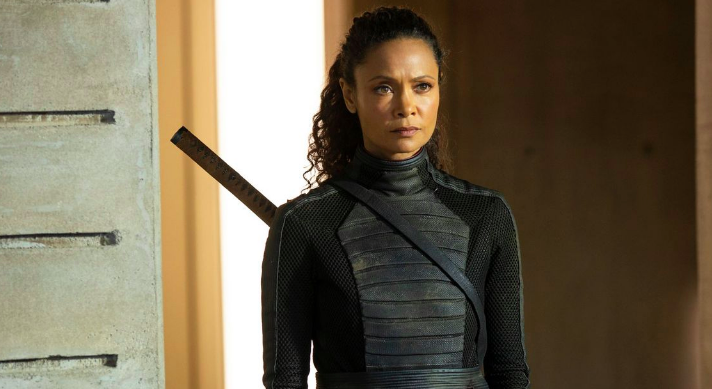 The violent delights in HBO’s science fiction drama Westworld have had many ends.

In Season 1, the violent delights seemed misogynistic as viewers were introduced to Westworld, a theme park for the uber-rich to rape and murder lifelike robots called hosts to their sadistic hearts’ content. The extreme unequal distribution of nudity, in particular full frontal, and the sexism it suggested tended to overshadow the show’s philosophy as the hosts in the park gain sentience and come into their own powers.

By Westworld’s Season 2, they were on a solid path toward redemption as we went further into the hosts’ growing consciousness as they rebel against the people who created them only to use them as repositories of human cruelty and sadism. We also find out that the park creators were also collecting an intensive database of information about the human visitors and their predilections, data that would be worth its goal outside the park.

In its third season, Westworld takes an entire leap from the theme park into the real world as it reveals that the data collection from both humans and hosts was being used for the most nefarious of purposes: social control and a disturbing strain of cultural eugenics. Westworld Season 3 also follows our woke and intrepid heroine/host Dolores Abernathy (Evan Rachel Wood) as she seeks revenge not just for the many crimes that had been committed against her in her 35 years of existence, but for the abuses all of her kind were forced to suffer.

Because it takes place mostly outside the park, we have the first chance to see what the world all those humans escaping to Westworld is actually like. It’s creepy AF. In spite of the technological advancements that could help create robots so lifelike as to fool people into believing they are real, there don’t seem to be that many actual humans left. The world is sparsely populated and the gap between the uber-rich and the poor has only grown to Grand Canyon size. Many lower income people who work menial labor jobs, like new character Caleb Nichols (beautifully played by Breaking Bad alum Aaron Paul), are forced to use an app to make cash on the side by committing a variety of crimes. Caleb is often accompanied by Ash (Lena Waithe) and G, Marshawn Lynch’s fantastic turn as an enforcer whose shirt lights up to announce his mood, as they rob ATMs, deliver stolen items, and more in order to supplement their other meager incomes.

Unlike the first two installments that featured multiple timelines happening simultaneously that forced viewers to question everything we were seeing, Season 3 is the Occam’s Razor where the simplest explanations proved to be true. When Dolores smuggled host data out of the park at the end of the second season in the form of black pearls, fans fiercely debated who these original characters might be, only to have them all to turn out to be copies of Dolores. Even though Westworld newcomer Engerraud Serac (Vincent Casell) seemed to be a technological mastermind who helped create the supercomputer Rehoboam, in the end he turned out to be as much a pawn of the system as everyone else. The idea of free will and where it intersects with technology is fascinating, especially when we find out that Rehoboam has decided the fates of all living humans using algorithms, limiting the available choices for people as if they were part of a video game rather than real life. The revolution that results from Dolores ripping down the veil between this tech and the humans it’s controlling is a stunning bit of justice that feels as urgent in our world as it does in Westworld.

But for me where Season 3 properly shines is in the context of rape revenge and how Dolores’s long history as a host specifically created for human rape fantasies shapes her choices when she makes it into the real world. The first few episodes follow Dolores as she confronts different men who had brutalized her in the park. She repurposes them for her new mission in the real world. She makes sure to remind them she fully recalls what they did to her and to others, and her complete lack of mercy is thrilling. From the moment that one of Dolores’s alter-egos in the physical form of park executive Charlotte Hale (an incredible Tessa Thompson) initially locks up Dolores’s longest tormentor William (Ed Harris) through to his long-awaited capital punishment for his crimes against everyone, including being a violent serial rapist, the story had me standing up in my seat and cheering.

For many rape survivors, tales of rape revenge are the only justice we will ever experience. Dolores actor Evan Rachel Wood herself has often mentioned how playing this role helped her heal and bring closure to her own real-life experiences of sexual and domestic violence. It was beyond beautiful how Caleb Nichols, the leader Dolores selected for human evolution and revolution, was selected specifically because — even for all his other crimes — he had never committed an act of sexual violence. This morsel of social commentary highlighting the particularly heinous nature of rape as a human choice that exists outside of pure survival like many other examples of violence is an evergreen message. The fact that going forward this hero would be working shoulder to shoulder with Thandie Newton’s badass, samurai-sword wielding Maeve Millay was just more icing on the treat that Season 3 became.

By the end of the season, Dolores’s arc and motives are ultimately revealed to be of great benefit to humanity and its future survival, not its destruction as many had suspected. She realizes that her thirst for vengeance has turned into a quest to save oppressed humans, as those oppressors who hurt her finally get their due. She finds peace in choosing to spend her last moments of consciousness focusing on the beauty that she experienced even as she existed for 35 years in a hellscape loop.

Along the way, I found my own journey with the show from conscientious objector to eventual superfan followed on a similarly huge emotional trajectory that easily catapulted Westworld into one of my top favorite shows of all time. As Dolores grappled with her trauma, I also worked through processing mine, and found myself lighter by the end of this season.

Westworld’s worldbuilding continues to be exceptional, with such attention to detail that when you go back to watch Season 1 and 2 again with all the new information, the show itself has actually changed in the meantime. That’s not just television. That’s art — and maybe a wee bit of magic, too. It’s a long wait until Westworld’s Season 4, but if Season 3 was any indication, it will be well worth it.