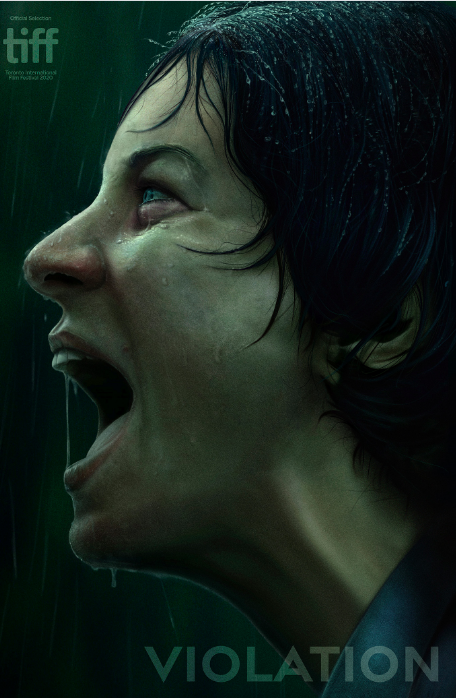 It’s been a while since I’ve seen a film that surprises me. Everything about this movie is creative and mesmerizing and it stems from actor, writer, director, and producer Madeleine Sims-Fewer. Violation had its world premiere at TIFF and is scheduled for many other appearances before the end of the year. There is no doubt this film will leave audiences in awe.

Without giving anything away, the film follows Miriam, a troubled woman on the edge of divorce. She returns home to visit her sister Greta after years of being apart. When her sister and brother-in-law, Dylan, betray her trust, Miriam embarks on a vicious crusade of revenge. The film stars Madeleine Sims-Fewer (Woman in Stall, Slap Happy), Anna Maguire (Ever After: A Cinderella Story, The Hummingbird Project), Jesse LaVercombe (American Gods, Murdoch Mysteries), Obit Abili (21 Bridges, Tula: The Revolt), Jasmin Geljo (Assault on Precinct 13, The Sentinel), and Cynthia Ashperger (Degrassi: The Next Generation, The Waiting Room). The film was written, produced, and directed by Sims-Fewer and Dusty Mancinelli (Winter Hymns, Chubby).

The first thing to note is the cinematography and direction. I love a good film that can pull you in with images and make connections between seemingly unrelated things. The images in Violation invite nature to be a part of the film. The images pair well with the story. The nature aspect provides metaphors for major themes and actions in the film. The wide shots are beautiful, yet at times blurry or upside down letting you know that things are not always as they appear. It’s an amazing way to show what you feel, rather than heavy dialogue. It assumes the audience is smart and can decipher meaning in the most innocent of scenes. The directing was great in terms of the non-linear approach to the film. The story has that much more of a punch to the gut when you realize what is going on. Sims-Fewer and Mancinelli are very ambitious directors. Violation is deliberate with its intentions, so we don’t know what’s going on until the film wants you to. The directors have given us a film that is psychologically gripping for the audience as much as it is for the characters. It was heavy. What you thought was happening suddenly shifted into something completely different.

The success of the main character Greta, played by Madeleine Sims-Fewer, comes through looks given and words unspoken. She is fierce and independent while also wanting to be heard and loved. She is a character who does unspeakable acts, but still muddles the classification of a hero or a villain. We know her marriage is on the rocks from the beginning. It’s this idea that allows the audiences to make assumptions. The acting by this small cast is done extremely well. The doubt, the mistrust, and the threat of deception counteract every intention of loyalty, truth, and love displayed by these characters. In the beginning, Sims-Fewer plays Greta as someone less confident and more threatened by those around her. It isn’t until the second half of the film that we see what she is truly capable of. The characters misjudge her along with the audience. The script comes down to a series of interactions that build off the strength and ability of its actors.

Violation gives us a view of family that teeters between love, resentment, and everything real that can be shared between family members. Sisters are the centerpiece of so many films. The rawness of the ups and downs are displayed well in the film. The hardships that come with loving someone are spotlighted powerfully. Love is a powerful feeling, and to be able to showcase the positives and the negatives is an example of great writing and great talent. Violation plays with the audience, as it gets us to think about or own views on the subject.

One of the main themes in Violation is right or wrong, in the sense of morality but also the sense of mistakes and incorrect responses. The story highlights the themes through action and images. Violation is a prime example of the idea that you never know what someone is capable of, no matter how long you have known them. There is a timely aspect to the film that isn’t overtly editorialized for the sake of teaching a lesson, and there are multiple lessons in the film. Violation also asks the audience to look at their prejudices and assumptions because, as we’ve seen this year more than ever, we don’t know what people are going through.

Violation is a great film. At first, you may think it’s all over the place and visually hallucinatory; I did. But, the camera tricks and angles just add to the juxtaposition in the film. The film speaks to the parallels that can be found in humans and nature. No doubt you will be thinking about this film long after it’s over.