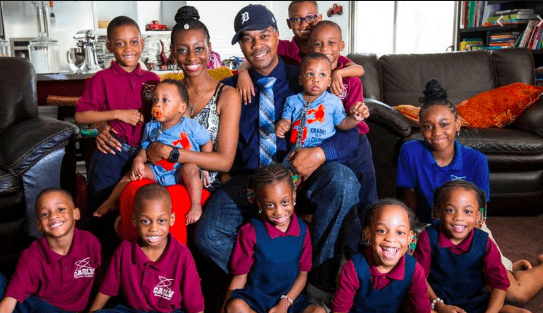 When I first saw the ads for Doubling Down with the Derricos, the latest family program on the TLC network, I was astounded that one family could have that many children—14! I wasn’t sure if they were a benevolent family that had both natural-born and adopted children. Also prevalent in the Black community, perhaps they’d taken in additional relatives to raise. I never thought I’d see a Black family on TV with that many children born in the usual way.

When you look around, it’s fair to say having a sibling is relatively standard. Having two siblings is less common than having one, but it’s still nowhere near anything outside of the norm. So when it came to the Derrico family, it’s clear their message is more is better, and be fruitful and multiply.

The stars of TLC’s latest series centers on the Derrico family and welcomes viewers into their world of caring for their extra-large family. What’s impressive is how these super parents get it all done with only the help of a few relatives and still manage to give each child all the love and attention they need to thrive. While it’s clear they’re able to manage their household efficiently, the Derrico family’s journey hasn’t been without its challenges.

Deon (originally from Detroit) is a real estate investor. Karen (originally from Myrtle Beach, South Carolina) is a stay-at-home mom. Their love affair began in a night club when Deon saw Karen dancing away. A dancer himself, he made his way over. He found they had other things in common, in particular their mutual desire to have huge a family. As the two became serious in their relationship, Deon asked Karen how many children she wanted. She said, “As many as God wants me to have.” With multiple births on both sides of their respective families, it was only a matter of time before their common dream became a reality.

Now living in Las Vegas, the Derricos are still dancing, but they have a few more dance partners. Their robust family consists of two single children (daughter Darian, 14, and son Derrick, 9), twin boys (Dallas and Denver, 8), quintuplets (Deniko, Dariz, Deonee, Daician, and Daiten, 6), and twin boys (Diez and Dior, 2) all conceived naturally. Just as they loved to dance, they passed on their love for their family. The D is not silent.

When viewers meet the family for the first time in the pilot episode, Deon and Karen are months away from welcoming their latest blessings, a set of triplets. Although the family is excited about their latest editions, there is a sense of fear accompanying the big welcome. After numerous multiple healthy births, the Derricos experienced tragedy with their youngest set of children. Twin boys Diez and Dior were initially expected to be a set of triplets. Sadly one of the children did not survive the pregnancy. Saddened by the loss of one of their children, the couple coined a new term, “triplin,” to honor their lost baby. Taking every precaution to deliver all of her children, Karen would ultimately go on bed rest and deliver healthy triplets named Dawsyn, De’Aren, and Dyver.

The Derricos family now join TLC’s stable of prominent families focused on sharing the innermost workings of their family. What’s particularly intriguing about them is the fact that they are a vast Black family. Not to mention it’s fascinating that these two people, in particular, were drawn to each other. Both are the products of families with multiples without being multiples themselves. In an era that’s made celebrities out of the “Octomom,” the Duggars, and others, the Derrico family is an anomaly but another opportunity to see Black representation in a standard white space.

Additionally, at the family’s helm is a proud Black father and an equally proud Black mother. Deon makes time for each of the boys individually via an in-home barbershop, while Karen makes every effort to make sure her girls are their best when they leave home. They’ve created an efficient schedule that allows for smooth flowing meals, extra-curricular activities, and outings where the children can explore without looking like a sideshow. These are feats for someone with two children, let alone fourteen.

That’s not to say there aren’t disputes amongst the children and the usual sibling rivalry. From the outside looking in, the Derrico children are as well-adjusted as your average family. The younger children look to their older siblings for guidance, just as the older ones learn more about rendering care by being of assistance to their parents. Curious and intelligent, all the children seem to know and feel comfortable in their spaces within the family structure.

Ultimately, Doubling Down with the Derricos is less about the number of children in the family. The real messaging in the program is about a family’s love for each other and their ability to accomplish daily goals with each other’s help — a lesson we can all appreciate.

TLC’s ‘Doubling Down With The Derricos’ Returns June 1st

Exclusive Clip from ‘The Family Chantel’: Chantel Goes on a Job Interview