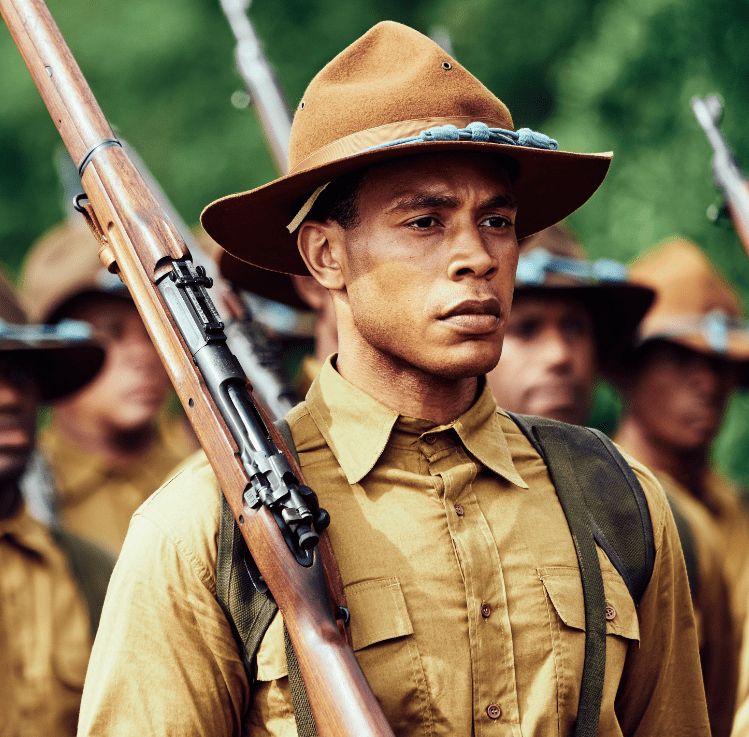 If you’re a fan of the hit Fox series Empire, you’re already familiar with Trai Byer’s work as an actor. He is most notably known as Andre Lyon, the eldest son of the Lyon clan, child of hip hop media mogul Lucious Lyon (Terrence Howard) and flamboyant mother Cookie (Taraji P. Henson).

Trai has also appeared in Ava DuVernay’s civil rights drama Selma and now he’s traveling further back in time in a new role as a member of the 24th US Infantry Regiment in 1917.

Deep in the heart of Texas lies a story that little may know about called the Houston Riot of 1917.  The 24th tells that story.

Kevin Willmott, director of The 24th (and co-writer of BlackkKlansman), had the idea to make a movie of this story 20 years ago. He and Byers teamed up to write the script.

Byers plays Boston, the lead protagonist of The 24th, a man from New York also from a family of former slaves turned abolitionists. According to Byers, Boston grows up in an abolitionist society and understands the importance of education and legacy.  Boston, like so many Black men at the time, volunteers to be in the army and fight for democracy and honor and patriotism.

In a phone conversation with Trai about this riveting story, he talks about how the film was adapted to the big screen, various themes of colorism his character struggles with, and cancel culture. Without giving too much away, there are moments in the film where Boston deals with infighting among his own people. But, ultimately, the infantry stand together to fight the much bigger battle ahead of them.

How did you come across this story? And what led you to decide that this was worth adapting on the big screen?

Kevin Willmott was my teacher at the University of Kansas for screenwriting. While I was there, basically he and I struck up a really good relationship. He actually wrote my letter of recommendation to grad school, for Yale School of Drama. While I was there, he shared with me the script and he said he had a part in there for me that he wanted me to play. I graduated, did a couple of gigs, did some independent films with him writing together, wrote another piece, and right before he was going to do BlacKkKlansman, he asked me to join him on this script.

Without giving too much away, your character struggles with his fellow officers in this story and colorism. Your character’s educational background plays a role in that. Why was this important to shed light on?

Thank you so much for asking that. We still deal with it; it gets to the heart of our future. Ultimately, there’s so much in terms of history that has, intraracially I think, got in the way of us. Again, the story is timely. We’re looking for something to dramatize in the story that is obviously inspired by true events over dramatizing around it. These things are still as important now as they were then. You can build a story around it. We’re going to build an awareness about the events; we can also build awareness about people. Especially in places in the South like Texas, whether it’s Mississippi, Alabama, Georgia, you’re really dealing with the idea of colorism — you’re dealing with the idea of a light-skinned man being with a dark-skinned woman.

You can get in any culture, and you can get as far away. You get judged for something that no one knows anything about, and you get canceled. You know what I mean? Cancel culture was as applicable then as it is now, it just didn’t have a name. It was beneficial I think for us to be able to make this as real as possible in the way that it fit into the historical context of our movie.

Going back to working with Kevin Willmott, what was that experience like for you writing a feature screenplay? Do you believe working as an actor has developed you as a writer?

It was so much fun writing with Kevin. So much fun writing the screenplay in general. I’ve been writing for a long time. Generally, our job [as actors] is to take the text, and let it move through our vessel. So we bring it to life. We bring in the light and ideas. Ultimately whether it comes through improvisation or being completely open and building a background, we’re all writers. We just develop the skill. By developing the skill, for myself, absolutely I’m more in tune with my acting. And I’m still writing, writing a few more things, and I keep testing it and we’ll see what people think.

There are so many profound and impactful scenes in this film. Is there one particular moment while filming that resonates with you the most?

There is a scene in the film that is the epitome of brotherhood, of coming together as one group of men. Despite the color, despite being dark-skinned, despite being light-skinned, for the sake of hope, for the sake of patriotism — the excitement of seeing in these men’s lives the hope for the future that when they’re all together around one another chanting a chant that wasn’t necessarily meant for them, but taking it and making it their own — you could feel the spirit of the men, and you could feel the spirit of hope.

I can’t let you off this call without asking about Empire. Taraji P. Henson is starring in her own spinoff of Empire, which we’re very excited about. I wanted to get your thoughts about the news, and also will you be involved in the series at all?

I’m super duper happy about the news. Obviously we ended prematurely because of coronavirus. But where we left off, I know that show will pick up and I’m very excited for Taraji. She’s also an executive producer on this series, and she was such a big part of the success in general. To see her able to move forward and to grow in her responsibilities as a creative in terms of being a producer, I’m still very happy for her. As far as me, I’m doing movies and I’ll leave it at that.

The 24th is available on virtual cinema, VOD, and digital August 21st.