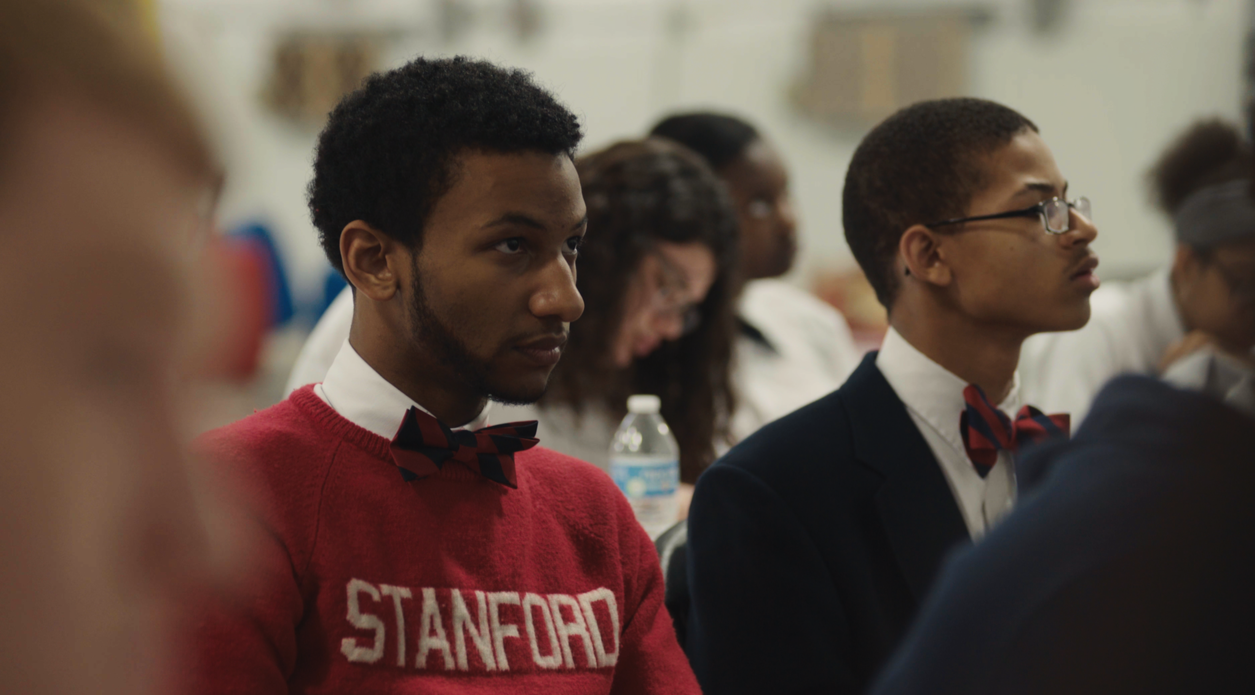 The 2021 Tribeca Film Festival is in full effect. It’s been a bucket list item to cover Tribeca for this reviewer. While it may be virtual for me this year, it’s still a highlight to be covering films at this festival. I am starting with a good one. This documentary affected me more than I ever thought it could.

Accepted is a feature-length documentary from director and cinematographer Dan Chen. The film follows four high school seniors in rural Louisiana as they attend T.M. Landry College Preparatory (T.M. Landry), an unaccredited, co-educational private college-preparatory school in Breaux Bridge, Louisiana, for grades K–12. The school was developed in a kitchen and quickly spread to a spare warehouse. There are no textbooks and no homework. The school is known for sending its graduates to prestigious universities, including Ivy League schools. Accepted spotlights the students and the rigorous testing and high expectations of founder Mike Landry. Landry demands nothing less than maximum effort and complete focus towards the college dream.

Dreams come crashing down when the New York Times publishes an expose on Landry and his controversial methods of getting his students into college. There are reports of abuse as well as the doctoring files. Students leave, parents are outraged, and the school loses traction, despite going viral with all of the acceptance videos shared around the country. The four high school seniors highlighted in the film are left to deal with the aftermath of the accusations, charges, and truth about their school. They have to figure out, on their own, what comes next.

First and foremost, it’s surprising how intimate director Chen got with T.M. Landry and its students. These kids showcase a vulnerability on camera that is staggering to behold. The story of T.M. Landry has a beautiful cinematic flow. Chen highlights the unicorn and rainbow aspects of the story and then drops truth bombs on you, making viewers like me second guess the idea you just fell in love with. The story is built up properly with a satisfying ending. Accepted turns out to be less about revealing one school and more about the students who are chasing their future. It is more about the education system and less about the one educator. As a first feature documentary, Chen has the storytelling down pat. The film is very well structured.

Also, it covers a topic I can talk about for hours: the inequities in the American education system. Accepted draws the comparison of what Mike Landry did with his students to what Hollywood elites did for their kids. The many differences between the two scandals are diligence versus laziness, Black versus white, and poor versus wealthy. This aspect of the film drew me in the most, which is why I wanted a peek from the admissions side of things. I connected personally with this story as a Black woman who went to predominantly white schools all my life to be told as a senior that all the colleges I wanted to apply to were reaches and I should aim lower, while my privileged, white counterparts had half the resume I did but were never told to reach anywhere other than the best. It’s beyond frustrating and mentally taxing to think you aren’t good enough without being white or “padding” your resume. It begs the question: What is good enough? It shouldn’t be this hard for Black people to get ahead in life. What’s missing is the dive into Ivy League college admissions from the admissions point of view. We are still on the outside speculating what’s inside. I wanted to know what they had to say about it all.

The four seniors singled out in the film not only act as an example of the strength and character needed to overcome adversity, but help highlight the importance of mental health and the toll applying to college takes on a young person’s psyche. These kids wanted to go to great colleges, so they worked hard to achieve that at the cost of emotional, maybe even physical, harm. Landry yelled at his students like he was their daddy. He made students cry. He also encouraged them and made them believe they could do anything if they set their mind to it. Proper encouragement can go a long way.

The themes of this film are timely no matter when you watch it. The ending of Accepted had a pleasant payoff. It signified there is more to life than Ivy League colleges and universities. Life before, after, and during school is about finding yourself and a place you can call home in the world. While those who stayed at T.M. Landry got accepted into schools, the four students found out what they were capable of despite everything. Accepted is about more than being accepted into college. It’s also about accepting yourself for who you are.

Accepted screens Saturday and Sunday at the 2021 Tribeca Film Festival.