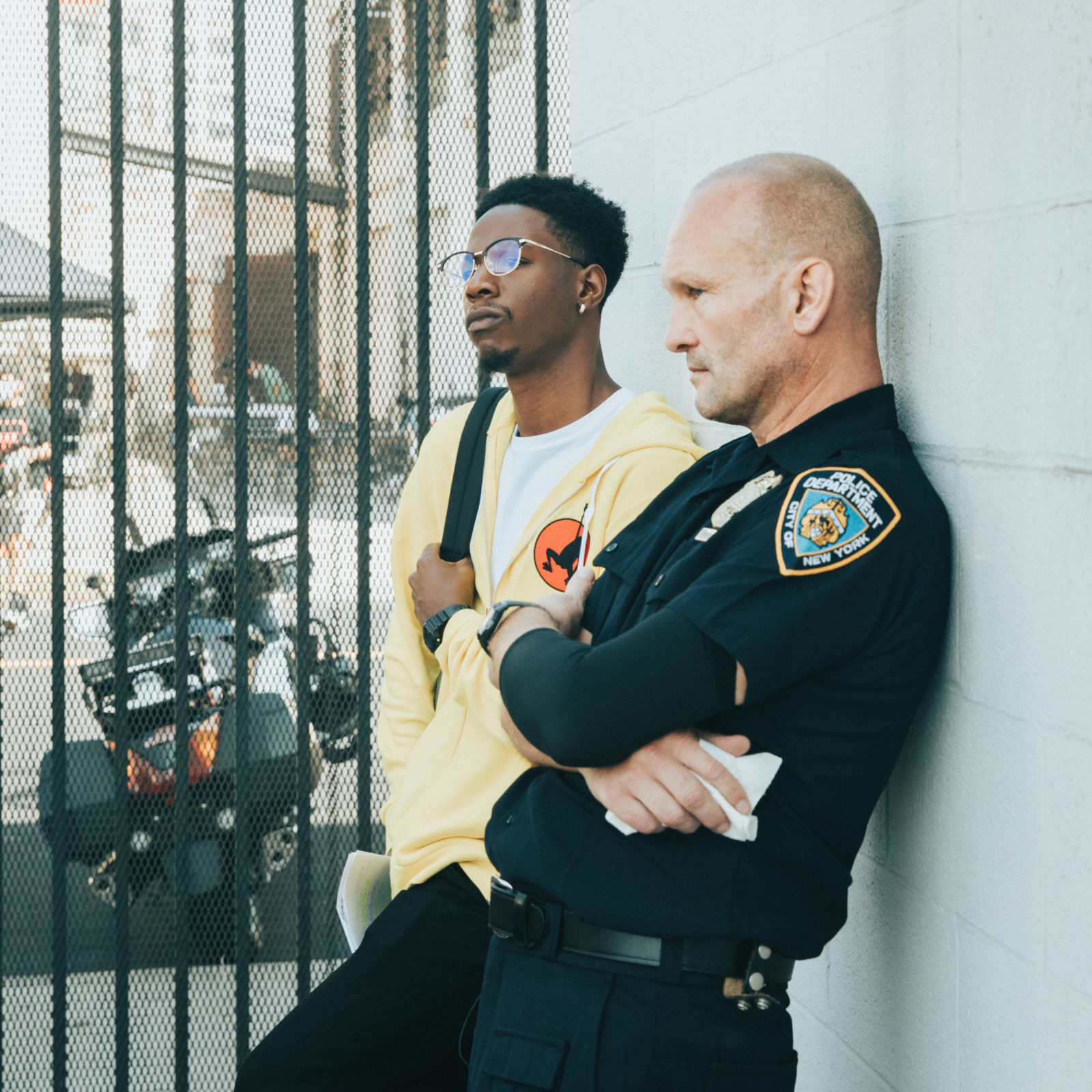 Two Distant Strangers is an Oscar-nominated short film written by former Daily Show writer Travon Free and co-directed with Martin Desmond Roe. The film centers on a young man named Carter James, a graphic artist who is trying to get home to his dog in the aftermath of a hookup.

On the surface, the film seems to meet the need of “Groundhog’s Day but make it Black!” but with more harrowing consequences. Instead of watching Phil stop a hapless bystander from stepping into an icy puddle, we see Carter James get murdered at the hands of the NYPD.

It’s an unsettling difference not only due to the violence but also the atmosphere doesn’t seem to allow for this type of overt crime. His hookup is a bright, independent woman named Perri (Zaria Simon). She’s witty and clearly intelligent and is not afraid to speak her mind. The first picture seen of Carter’s dog is of his adorable smile on Carter’s phone. He checks up on Jeter (yes, like Derek; “You boys are so predictable,” Perri jests) using a fancy dog camera app that dispenses treats.

Carter is introduced in the same setting we meet iconic indie protagonists like Tom in 500 Days of Summer or Joel in Eternal Sunshine of the Spotless Mind. There’s no difference between him and them except he happens to be Black.

We follow Carter’s first steps out of Perri’s apartment building and into a world where his mere existence sets off a chain of events that leads to him being the victim of a police-induced chokehold. He wakes up startled the next day to find himself back at the beginning of the previous/same day. Perri, who is none the wiser, startles awake next to him and tries to soothe as Carter reconciles the deja vu-like quality of his “dream.” This first go-round, he quickly puts his concerns on the backburner and ends up getting shot in the chest by the same officer as a result.

This happens again and again, and the violence against Carter escalates. He’s shot in the back, shot in the chest, and strangled, and each time Officer Merk (played with terrifying accuracy by Andrew Howard) yells “Comply!”

Despite being generally well received (it garnered a 68% audience score on Rotten Tomatoes), the film has received some criticism. Chron.com calls the movie “more triggering than thought-provoking,” and Tayo Bero at The Guardian asks, “Who are today’s ‘Black’ films and TV shows really for?”

These statements have merit and speak a painful truth about what a movie like Two Distant Strangers could represent. However, Two Distant Strangers isn’t simply a day (or multiple versions of the same day) in the life of Carter James. It’s about the shockingly average African-American experience in this country when it comes to police violence.

There’s something particularly draining about the Black community having to police their behavior so the police don’t see them as a threat. When Trayvon Martin was shot for wearing a hoodie, I spoke with my nephews about how they were responsible for their own safety and cops were not there to protect them. In the film, Carter says, “The only people happy to see the cops are white people and other cops.” It would be easy to question Carter’s actions and suggest that he change his tone or take the officer’s mood into consideration, but it wouldn’t have mattered. Ultimately, the preparation Carter makes to just live his life peacefully or that the Black community makes to protect their youth doesn’t matter. Not when the antagonists refuse to see the problem.

The critics ask: What do movies like Two Different Strangers really accomplish? What do they do to effect change? Are they simply exploitative films of Black trauma used to soothe white guilt? Bero from The Guardian says it especially well: “I think the answer to that lies in the fact of who is harmed and who is rewarded when these films are made. Black trauma porn allows white audiences (and film-makers for that matter) to say ‘I’m engaging with the tough and important stuff,’ while reasserting a status quo of racial violence and Black suffering under the guise of authenticity.”

Again, she’s not wrong. There’s been an increase in these films that are allegorical but taken at face value when the call for white people to relate to them is made. The white viewer is not as racist as the antagonist onscreen because they’re not in the KKK. They’re not racist cops — heck, they’re not racist at all. Clearly the person on screen isn’t meant to reflect them. I understand the ways that white audiences could cop out of the film, but to say that responsibility lies with the film is an incomplete perspective. If there’s a trope in the film, it’s that Black people can present themselves in wholly relatable ways and it still won’t matter. Two Distant Strangers isn’t a call to action as much as it’s a recognition and acknowledgement of Black pain — of Black joy, Black fear, Black pride, and the beauty the community has innately due to shared experience.

Watching Two Distant Strangers the first time is a journey. On the subsequent, watches the movie feels somehow bigger. Suddenly it’s not only about Carter, but about the world that affects him. It’s the worst version of the best choose-your-own-adventure book. The only favorable ending is a delay to the inevitable, but the inevitable still persists.

During a ride-along with Merk and Carter, Merk shows a naivety that appears to show his vulnerability. Carter asks him why he wanted to be a cop, and Merk starts with the superhero reasons: he didn’t like the direction the country was headed; there was no one left willing to fight for truth, justice and the American way. Carter calls him out on his technical and robotic delivery and asks him the real reason.

Merk: I got sick of being bullied.

Carter: So you became one?

Merk: So now I put them away.

This could be inspirational, but what it does is show a potential flaw in Merk that is more dangerous than it is endearing. When Merk’s reasons are to rid the world of bullies, it means on some level he has to convince himself that anyone who doesn’t comply is a bully. And perhaps if the people who “bullied” him were Black, then all Black people are bullies. This colors not only his perception of the world, but his actions inside of it. Being an officer of the law means his actions can carry a lethal force that is dictated by bias. This bias serves as the real culprit for Carter’s demise. Instead of closure and understanding, we get a pool of blood in the shape of Africa flowing from Carter as his dog whimpers just steps away behind a locked apartment door.

Sometimes the purpose of a piece of art is to just exist and showcase what the African American community goes through. Two Distant Strangers serves as a time capsule showing the truth of the movement. As long as these injustices keep happening, their effects will be reflected in the art that is created. This is not to say there’s not happiness or joy in the African American community, but I believe the lack of true empathy for their pain is one of the main causes for this flood of Black trauma media.

While it would be beneficial to see more variety when it comes to popular Black projects, it is important to keep a record of events that impact the zeitgeist. Two Distant Strangers fits the mold beautifully.