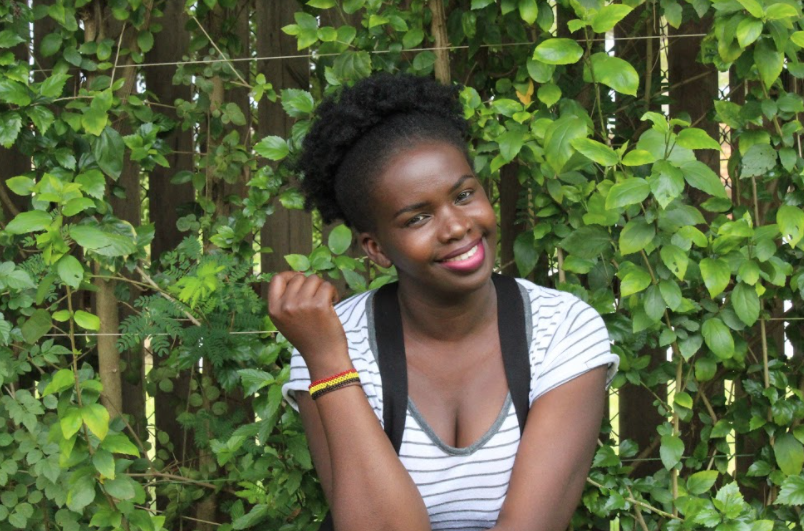 Imperial Blue is a compelling indie adventure-thriller about the quest for a sacred powder, “Bulu” aka “Imperial Blue,” that places the user in a trance and allows visions into the future. Bulu comes from the blue flower of a rare plant found only on the land of a witch doctor in East Africa. When he dies unexpectedly, his devout Christian daughter, Kisakye, is forced to fight to save the family’s farm by any means necessary. BGN had a rich conversation with Esteri Tebandeke (Sara in Walt Disney Studios’ Queen of Katwe) about the challenges of indie filmmaking in Uganda and the rewards of playing Kisakye Gloria.

What attracted you to play Kisakye?

I wasn’t originally attracted to playing Kisakye because I was afraid of becoming typecast. However, when I met the director, his relentlessness to get me in this movie won me over. Kisakye is more than what she initially appears to be. When I dug deeper into who she was, she was stronger than just a girl who is naive, suffering, and trying to get seen. She wants to keep her family’s land, and she would do anything and everything to save it. This role wasn’t just about the girl. It was about the whole idea of Kisakye knowing how to grow and use this plant, which has the power to change the world. So, that for me immediately became very tempting and very exciting and attractive to play.

This film has so many themes that connect the intersections of capitalism, colonization, and Christianity that are really relevant right now.

Yes! Imperial Blue is just telling you about a continent as pregnant and fertile and beautiful as Africa that has no idea what its potential is. So Imperial Blue for me is to help us as Africans understand that we are more than what we see ourselves as and that we should be more protective of what God has given us and be aware of the people who come in and take. Also for the Western world out there to understand that you do not know what this land has, you don’t understand. Look at the character of Hugo. He came in with an addiction; he didn’t understand the drug. He got consumed by it and ended up losing himself in this drug, in this land, in this culture, and he didn’t understand it at all. And Kisakye ends up triumphing. Yes, she might not be as ecstatic or elated at the end of the film but she really is triumphant.

Let’s talk about the mysticism of Imperial Blue and how that intersects with spirituality and traditional Christianity through drug culture.

So these are three exclusive things standing on their own, but when you try and understand how each of these aspects affect the characters, you realize that each of us has been affected by each of these things. Kisakye, as a Christian, has been taught by a white man that her father’s spirituality, which is considered witchcraft now, is not good and that she should worship God through Jesus Christ. Then, a white man comes to Uganda and he doesn’t understand how Kisakye can say, “Jesus Christ is God.” He’s more attracted to her original spirituality that white men called witchcraft! I want the world to watch this film from the eyes of those three aspects. It’s complex. At the same time that Kisakye wants to save father’s land from the church, she’s using her father’s spirituality, a drug that’s considered witchcraft, to try and sell it to this white man to gain her family’s liberation.

What were the biggest challenges of making this film for the whole production team?

I’m just remembering all of the moving parts. The European crew flying to Uganda, and then moving the Ugandans who lived in Kampala, which is the capital city, to Annapolis, a small city in Uganda that’s about five hours away. Once we got there, we had to drive an hour into another village through this very thick hilly forest, to a crater lake. We had to even take a canoe across the crater lake to shoot certain parts. There were snakes in the crater lake, and I’m so terrified of water! Yeah, I did my take in literally like five minutes to get out of there. We had to ride these small motorbikes, for transportation, we call it boda boda here, and then walk all the way across this field and down, huge hills where we were shooting. We would work long hours some days because the weather was not good. We had to have a generator on set because we were in a village without power, without water. We carried that generator up the hills, some days in rain, and the street was muddy. Then this bus we hired would get stuck on the hills, and we’d all have to get out and push it up the hill.

We had a lot of cultural clashes with the Europeans like what they ate and what we like to eat in Uganda. We enjoy the heavy food like real food and stuff, and they only eat the salad and avocado. It was hilarious. Then, while we Ugandans were not terrified of malaria, the Europeans were terrified when they saw mosquitoes. They’re like, “Oh my god, we’re gonna get malaria!!” Oh my God, it was surely the most challenging shoot I have ever been on, but also one of the most satisfying. I’m grateful for that opportunity. I’m grateful for the chance to help work on this movie because it taught me that I was resilient beyond what I even thought I was able to do.

What brought you the most joy working on this project?

That ride back to the hotel in that old dusty bus, with cast and the crew. The crew was so hilarious and turned every hardship into something to laugh about and be grateful for. I was always in stitches hearing so many funny stories. I still talk to most of the people that I met on Imperial Blue. It makes me really happy that our film is getting to the American market. It gives me joy to think how many people in the world will get to see this film, our story.