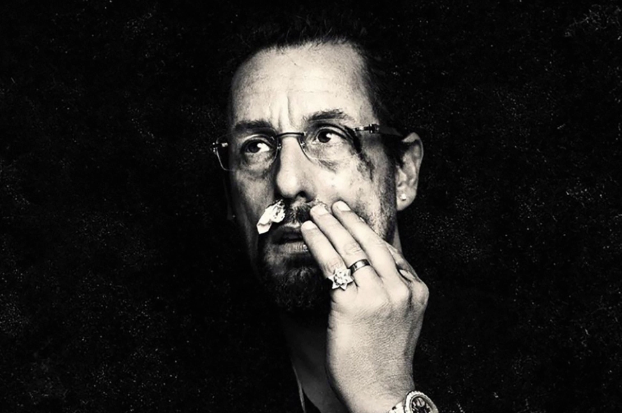 What’s it like to live life in complete chaos?

To have an assortment of people on your heels trying to hurt and possibly kill you each time you draw a breath? To be in constant pursuit of that one big “win” only to come up short each and every time until something different happens?

On the surface, Uncut Gems presents itself as a cookie-cutter heist thriller with the customary Jewish jeweler, shady business dealings, and implied mob ties. However, what emerges is a sinister tale of desperation, unwavering confidence, and fractured trust.

Directed and written by Benny and Josh Safide, Uncut Gems chronicles the turbulent life of has-been New York jeweler Howard Ratner (Adam Sandler). Up to his neck in legal (and illegal) debt, Howard struggles to maintain the balance between his home life, underworld business dealings, and gambling addiction while chasing his next big score. When a rare, uncut opal mined by a group of Ethiopian Jews lands in his possession, cashing out for its full, lucrative value becomes a war of attrition. Aided by his mistress Julia (Julia Fox) and street hustler Demany (Lakeith Stanfield), Howard begins a relentless pursuit to have it all.

With a marriage on the brink of divorce from wife Dinah (Idina Menzel) and the demanding side-girlfriend Julia, Howard walks through his day-to-day life at a frantic pace. With a failing jewelry business and endless debt to multiple unscrupulous people, the threat of violence is just around the corner everywhere he goes. When he’s introduced to NBA star Kevin Garnett as a potential buyer, Howard believes the tide is turning in his favor. In the middle of NBA playoffs against the 76ers, Kevin passes on Howard’s antiquated diamond work and becomes infatuated with the uncut opal.

Noticing Kevin’s infatuation with the stone, Howard opts for the promise of riches instead of a sure score when he informs Kevin the stone isn’t for sale and is promised to an auction house. With time winding down, delivering the uncut opal to the auction house becomes a perilous battle for Howard while the rest of his world continues to collapse.

In an era where every title is a remake or reboot or a sequel, Uncut Gems is a welcomed departure. Adam Sandler’s dramatic execution of Howard Ratner is nothing short of amazing when compared to his long history of comedic, slapstick roles with off-beat accents.

ALSO READ
Fantastic Fest 2022 Review: ‘Piggy’ is a Brutal, Blood-Soaked Coming-of-Age Slasher on the Horrors of Being a Teenager

Sandler’s portrayal makes it clear there’s no reason to like Howard Ratner. Relying on past success to remain relevant and secure a big score, he remains duplicitous even with his closest associates. His portrayal as the dishonest, philandering thief that constantly makes bad choices is mesmerizing and intense. Not a single moment passes where Howard has something go right, but his actions remind him and the audience why he doesn’t deserve a happy ending. At times, it’s almost painful to watch as he squanders chances to make amends with loved ones and business associates, resulting in further dire consequences.

Appearing the opposite of Sandler, Stanfield embodies everything distrustful and unscrupulousness in his portrayal of two-bit hustler Demany. From the moment he appears it’s apparent any dealing with him is ultimately more trouble than it’s worth. Luring Howard in with the promises of high-powered clients to buy his jewels, Demany quickly pivots into anger and aggression when his shortcomings are pointed out.

In his acting debut, ex-NBA star Kevin Garnett doesn’t have to stray too far from his athlete persona. Still, his performance does well against the unstable energy of Adam Sandler and the street savviness of Stanfield. Alternating between a confident basketball star and an insecure player looking for a superstitious boost to propel him to a championship, Garnett walks the line at just the right place.

Julia Fox and Idina Menzel deliver memorable performances as the women in Howard’s life who expose him for who he really is. He’s a sensitive, insecure man who wants the best things but doesn’t know what to do once he has them. In both of their respective relationships, he’s a man that started off with good intentions but ultimately places his greed and derelict ways above everything else.

It’s been said the best comedy is derived from sources of pain. Sandler’s performance in Uncut Gems is a fascinating combination of funny moments, real fear, and nerve-wracking decision making. Surrounded by a talented cast, he is the clear standout in a film that makes an anti-hero somewhat loveable while constantly reminding why he is undeserving of the big win he desperately seeks.