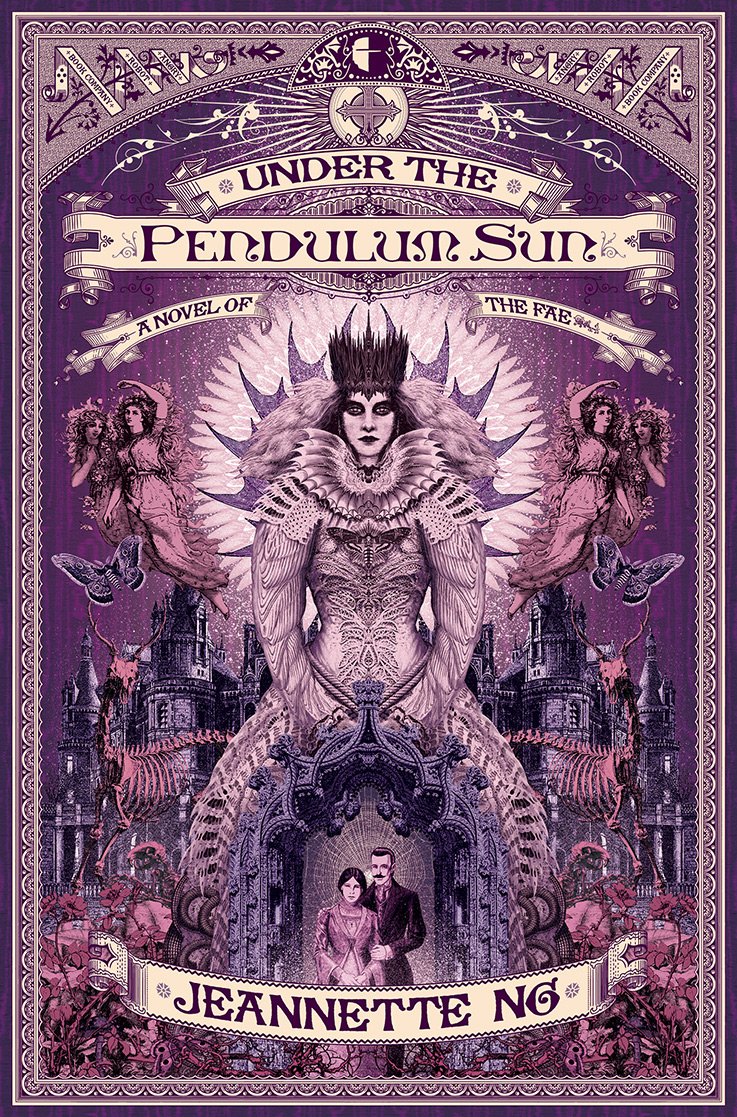 Under the Pendulum Sun, by Jeanette NG, is very, very, good.

Catherine’s brother, Laon Helstone, has disappeared in Arcadia, the Fae land, a recently discovered land that most colonizing powers are now desperate to establish trade links with. Catherine, with the support of the missionary society her brother belongs to, leaves to Arcadia, hoping she will find him.

From the start, Under the Pendulum Sun establishes its strong Victoriana theme. It isn’t only visible in how the characters behave but also in who they are, as one of the main characters is a missionary. Their morals too are very much Victorian. But Under the Pendulum Sun also references to many Victorian works: it goes from hymns, to the Victorian texts referring to faes, to inspiration from the Brontës novels and particularly to Jane Eyre: just like St. John Rivers dreams of becoming a missionary, Laon is one; just like Jane met Mr. Rochester, Catherine will meet a man falling from his horse.

The risk of so many references is always that they would lead to a sterile game of spot the references, but I strongly suspect Ng to have taken a fiendish delight in getting the Brontës fans elaborating theories based on what they knew, just so she could take the rug from under their feet a couple of times. And all the while they would berate themselves, thinking “I should have guessed it because of…” (In case I wasn’t clear enough, yes, I was talking about my reactions!) It is a remarkable work from Ng to work on and undermine the reader’s expectations to tell her own story. It makes Under the Pendulum Sun a true rewriting, taking a truth to subvert it and lead to a new truth.

The intertextuality isn’t only Victorian: a couple of Greek myths are subtly interwoven within the story, and the Judeo-Christian myths are the keystone of the novel, as are the Christian symbols like the fish or the cross. To that, you should add Ng’s incredible inventiveness and imagery when she depicts Arcadia, the Fae’s world.

It all gives the sense of a deep and slightly hallucinatory world.

Nonetheless, Ng never falls into the trap of letting the (wonderful) world building cannibalize her story that proceeds at a quick pace. Like in any good Gothic novel, there’s a mystery (or even two) to be solved and the characters go from shattering revelations to further questions.

In a sense, it was my only regret: though the novel felt complete, I felt it still had things to give and that another hundred pages or so would have been welcome, particularly when it came to one character.

Under the Pendulum Sun is Victoriana gone mad: questioning articles of faith with logic or in the light of encountering the Other, breaking taboos and morals (which leads to some interesting character development to say it mildly!), breaking the dainty imagery of faes, and filling their world with blood and treachery.

Under the Pendulum Sun is without a shadow of doubt one of the best fantasy stories I’ve read in 2017. I was engrossed in the mystery, delighted by the scope of the intertextuality, thrilled by the reversal of situations I hadn’t seen coming, and amazed by the world building. Under the Pendulum Sun not only has a fantastic cover, it also has a great story to tell that I would urge any fantasy reader, particularly if they are keen on gritty Victoriana, to try.