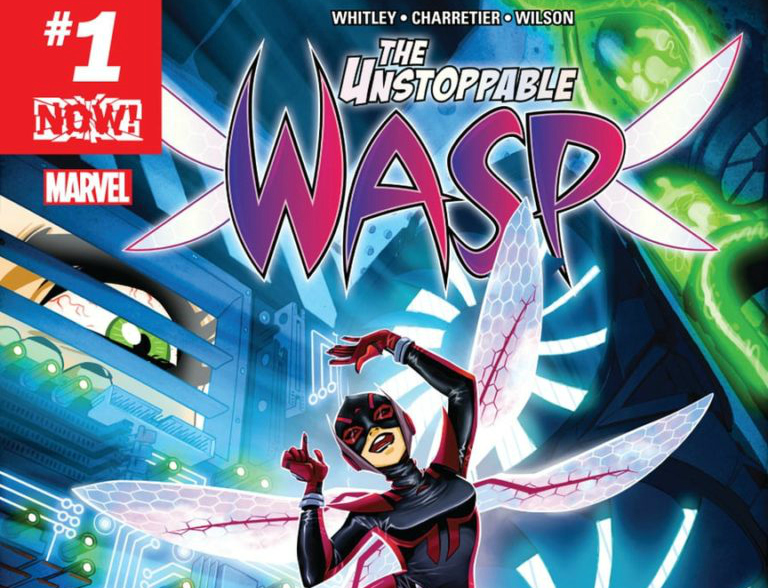 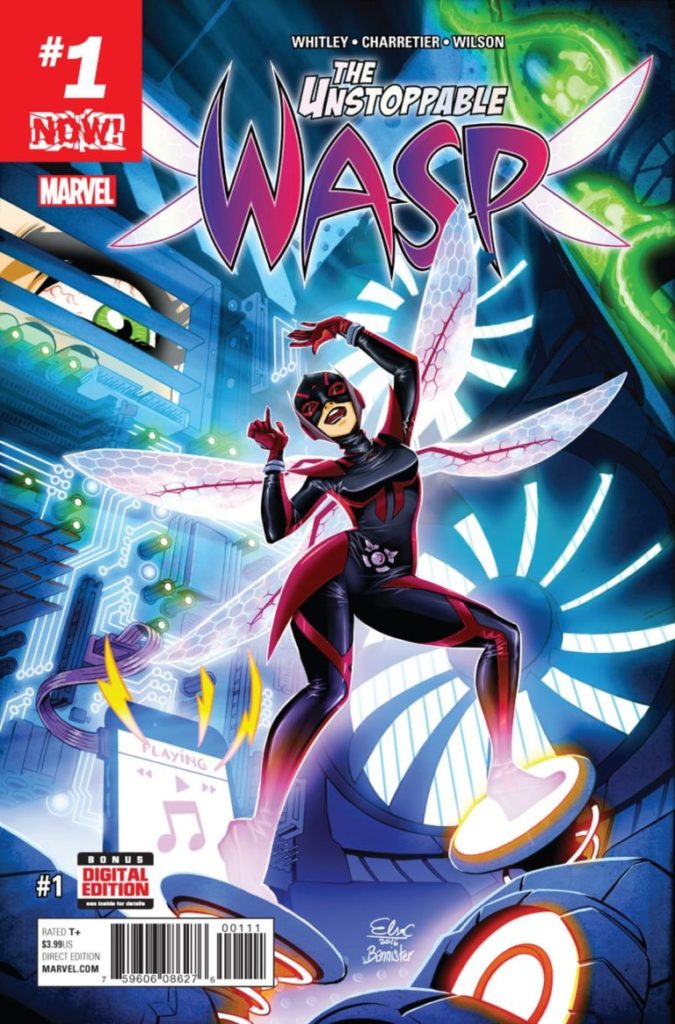 There are several “full disclosures” you need to know before reading this review:

No. 1: I’m a Jeremy Whitley Fangirl, have been since I discovered his series Princeless. So when I got the opportunity to get an advanced copy of Unstoppable Wasp there was a lot of !!! in my reply.

No. 2: I’m a Marvel Unlimited Gal, so I’m about six months behind on storylines so I knew very little about this character before reading this issue.

Ok, now let’s get to my thoughts on this issue! Not knowing much of Nadia’s story meant I really approached the story with an openness of a new reader.

As the story opens we see Nadia and Ms. Marvel perusing the yummy offerings of a Pakistani bakery.

Nadia’s interactions with the owner immediately show she has a natural gift of making people at ease. From the bakery, we follow the duo to the Immigration office where she immediately becomes the darling of the waiting room with her sunny personality and bags of pastries.

While Nadia talks to her caseworker readers get the chance to learn about her background. Turns out Nadia is the daughter of Henry Pym (one-time Ant-man) and a woman named Maria Trovaya.

Maria was kidnapped shortly after she married Henry and was never reunited with her husband. She does, however, give birth before her death and young Nadia is taken and raised in The Red Room (yep, THAT Red Room).

With a natural aptitude for science and access to lots of stolen research, Nadia perfects the Pym particle and promptly escapes to America to find her father.

Once Nadia learns her father is gone, she tries to forge a life for herself with a little help from her Avenger friends.

The action in this issue then revs up when Nadia and Kamala see Mockingbird fighting a large robot. The two assist and later Nadia and Mockingbird bond over science and “The List,” a ranking of superhero geniuses that Bobbie believes is seriously outdated.

This inspires Nadia, who seems motivated, to research “The List” and make the support of science-minded girls a cause.

This is not the typical first issue of a new series. There aren’t any dark secrets revealed or major cliffhangers, but it succeeded in peaking my interest about Nadia’s next steps. The Wasp team succeed in delivering a solid first issue that gives the reader a fully realized character.

The art, however, wasn’t my favorite. It could be due to reading a digital version, but it didn’t really pop for me. I’m sure as time goes on, the art will be more unified but for this issue, I found it just OK.

I really enjoyed that Nadia is truly a “glass half full” person. She appreciates all the small things in life due to the lack of freedom she had in her past.

This book also has a strong slant towards the sciences, which should be quite a draw to young girls. This is definitely a book to give to new comic fans. Though Nadia might not appeal to some, she has the potential to become a character who can find a successful niche in the Marvel world.