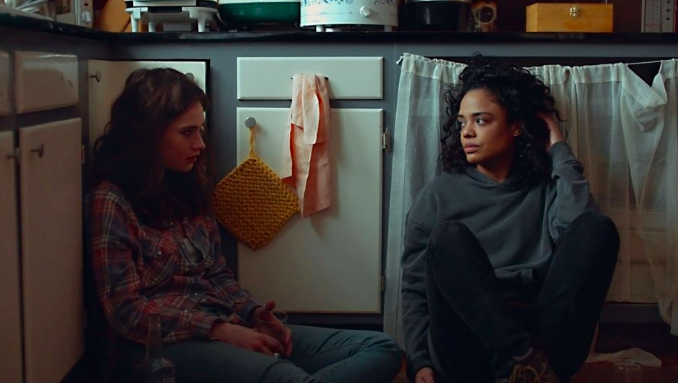 Little Woods, North Dakota is an oil boomtown off the beaten path, a path driven by grain trucks, and a town barren with empty main streets. This is the setting for the weighty family drama about two sisters. These two women are challenged by a broken health care system, a wretched economy, and selfish men — they have only themselves to look out for.

In the film Little Woods, Tessa Thompson executes one of the best performances of her career. She plays Ollie, a former prescription drug peddler, struggling to go legit after being caught and currently serving probation for trafficking narcotics across the border. Ollie, however, is not your average drug dealer, her intentions were best as she fell into this lifestyle to help treat her ailing mother who couldn’t afford U.S. healthcare. Her efforts as a caretaker extended beyond her mother, and Ollie profited from selling drugs like Oxycontin to help take care of her family. Her ne’er-do-well sister Deb (Lily James) has a son and recently finds out that she’s expecting another child with her good-for-nothing alcoholic ex Ian (James Badge Dale).

Deb is a mess and Ollie is the only one there in her life willing and available to clean up her sister’s mistakes. Deb inevitably decides that she does not want to have another child, knowing that not only financially she is unable to care of the baby, but she finds it unfair to bring a child into a life that is falling apart at every edge. Ollie reluctantly agrees with the decision and makes the choice to get the money together to help which means getting back in the game of selling.

During her attempt to go straight, Ollie has built a rapport with her probation officer Carter (Lance Reddick) and is close to the end of her probation. Carter trusts Ollie enough to set up an opportunity for new job placement, so the timing couldn’t be any worse for her.  When Carter decides to conduct one last check-in unexpectedly, Ollie is nearly caught with a shoebox filled with several bottles of prescription meds and stacks of cash.  The irony of a fresh start to a new life is hanging in the balance waiting and yet she’s willing to risk it all once again to save someone other than herself. This is the motif for Ollie’s story.

Ollie’s life is so complicated and stressful, that you feel exhausted for her, as you witness all of the trials and tribulations she is forced to confront. What is remarkable about this film is that writer/director Nia DaCosta — in her feature film debut — shows us with authenticity and precise character development, how strained and fatigued Ollie becomes as the film progresses and the story evolves. We’re on this taxing journey with her and we feel the weight of the burden she has to carry.

DaCosta also does an impressive job of using the camera as a tool for instability. The camera shakes and is unsteady throughout moments of the film and the opening shot does a perfect job of illustrating that. The establishing wide shot starts as static and immediately when Tessa Thompson comes into frame, the camera is unsteady and pushes in a bit out of focus. Initially, this may appear as if this is some amateur photography at play, but it is intentional and exceptional.

The chemistry between Thompson and James as sisters is striking and they each give their characters enough depth and empathy to earn our interest in their respective stories.  It is enough to where we care about them and want to know what’s next, even after this story ends.

Little Woods tackles several social issues from abortion to America’s dependency on opioids and although this particular story is fictional, it would not at all be a surprise if this were inspired or based on true events.

The film made its premiere this year at the Tribeca Film Festival and Neon has acquired North American rights.  The film was supported by the Sundance Institute, the San Francisco Film Society and the Time Warner Foundation.

Little Woods will screen this week at Urbanworld.