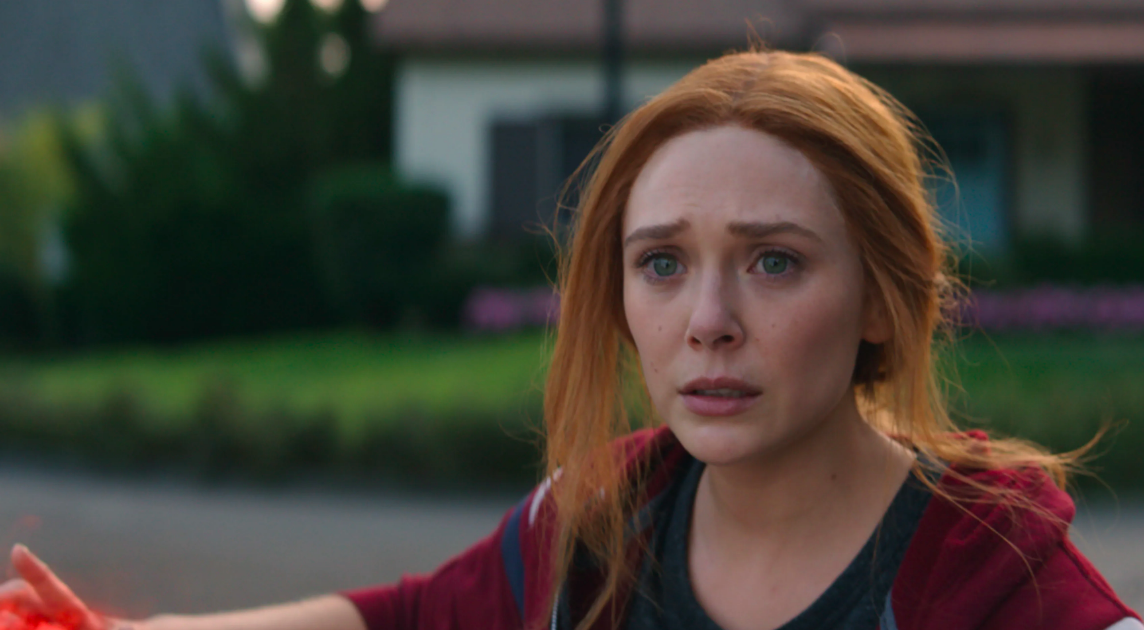 Tommy and Billy attempt to get out of Agnes’s clutches and are freed when Wanda uses her powers to attack Agnes. The boys want to help, but Wanda tells them to go to their rooms. Once they are gone, Agnes shows off her parlour trick. When Wanda attacks, she takes powers from the undeserving. Thus, Wanda’s hand shrivels.

White Vision (the Vision who was brought back to life by Director Tyler) arrives after Wanda throws a car at Agnes, who disappears. White Vision doesn’t take long to try to kill Wanda by crushing her head. Luckily she is saved by Red Vision, who throws White Vision into a trailer. Wanda tries to apologize for what she’s created, but Vision gets it. Wanda says she can fix it, but the two are interrupted by Agnes and White Vision. Wanda and Red Vision agree to fight for their home. Monica is trapped in Pietro’s room and can’t leave. The boy has too much power in one finger.

Red Vision is told by White Vision that Wanda must be neutralized and he is to be destroyed. Agent Jimmy is brought to Tyler, who is watching the fight. Tyler is confident that no one will know what he did (partially because Wanda cancelled her show) and that everyone will thank him for taking Wanda out after she illegally brought Vision back to life (the thing he did). Jimmy secures a phone and is thrown out after stating that he won’t join Tyler. Once out of his cuffs, Jimmy calls a guy named Cliff to assist.

Wanda’s town is still running normally when she flies in. Agnes takes a cheap shot at Wanda then informs her that the Scarlet Witch has been written about in the book of the damned, Darkhold. Wanda insists that she’s not a witch but Agnes states that the Scarlet Witch is to destroy the world then takes off the trance on all the people in town who slowly walk towards Wanda. In Pietro’s room, Monica finds information on Pietro who is actually Ralph Bohner and owns the house, not Agnes. In a few short moves, Monica takes him down and snatches a necklace that is controlling Pietro/Ralph. There goes that theory.

Billy and Tommy are watching the two Visions fight from the room up until they can’t see their parents anymore. Billy visualises Wanda being surrounded and in trouble, then the two run out of their rooms. The people state their grievances, bombarding Wanda, who can’t handle the pain and accidentally chokes the people. Once she realises what she’s doing, Wanda promises to let them go. Agnes tells her to do it now, stating that heroes don’t torture people. Wanda opens up the town to let everyone out, but Tyler sees it as an opportunity to get in. With the opening of the town, Red Vision loses power and falls in the middle of his fight, landing near Wanda. Wanda sees Vision disappearing as well as Tommy and Billy as they reach her. Agnes points out that Wanda’s family is tied to her world and she can’t save both Westview and her family. The FBI arrive at Jimmy’s location just as Wanda closes up the town again.

Vision and the twins run to Wanda to check on her but are attacked by Agnes in the moment. Wanda protects them but her power is taken. White Vision, Tyler, and his army, as well as Agnes, surround the family. The family goes into hero stances and battles the villains. White Vision and Red Vision go at it, but in the midst of their fight, White Vision states his programming directive is to destroy the Vision. Red Vision informs him that he’s a conditional Vision, which White Vision requests more info on. Interesting.

Outside, Agnes attacks the military, but Wanda ensures that they land safely then instructs the twins to handle them as she takes on Agnes. The twins are a bit too happy for their mission. I don’t blame them considering there are guns aimed at them. Once Tyler notices that the kids are doing well, he pulls a gun and shoots them, but luckily, Monica shows up and absorbs the bullets except for one which Billy handles just fine. Tyler hops into a truck and reverses but is crashed into by Darcy in the ice cream truck. Just in time. The Visions discuss a theory of the Ship of Theseus, which through the theory Red Vision points out that data is being kept from White Vision, who realises that he is a weapon easily controlled. Red Vision is granted access to White Vision’s memory storage, thus giving White Vision access to Vision’s memories of everything he went through. Once that is processed, White Vision recognizes that he is Vision then flies out. I’m about to cry.

Red Vision meets and hugs the boys while Agnes watches from a rooftop, allowing herself to be vulnerable enough for Wanda to use her magic. Agnes sees herself back on the stake when Wanda appears then makes the dead witches alive again. However, the witches turn on Wanda, pointing out that she is the Scarlet Witch and she is put on the stake. While on the stake, Agnes tells Wanda to give her the powers so that Wanda can live in peace. Cue the fighting again, with Wanda stating she doesn’t want it while also keeping Red Vision from assisting. Agnes enjoys every hit and absorbs the power, as Wanda depletes all her energy. Agnes attempts to attack Wanda with her powers but is unable to. Wanda goes back to normal and reveals ruins that she has on the forcefield placed around the town, thus Agnes is unable to cast any spells. Wanda absorbs all of Agnes’s powers after telling her that she knows who she is. As she absorbs the power, Wanda turns into a magnificent witch, headband and all. Agnes is then turned into the role of the nosey neighbor that will live in Westfield forever.

The family has a small, happy reunion, as they head home. Westview is slowly released from the magic of Wanda as they walk home and change back to their normal clothes. Once home, Wanda and Red Vision tuck in the twins, stating they are proud of them and family is forever, then giving each of them kisses goodnight. Wanda thanks them for choosing her to be their mom then lights out for them to sleep. Red Vision looks at Wanda lovingly then asks Wanda what he is, which she answers that he is her love and so much more. The two share a kiss and hold each other lovingly. He states that he is a memory made real; they have said goodbye before and will say hello again. The two hold each other as the spell cast takes him away and Wanda is left on an empty lot again.

Wanda walks back into the middle of town and sees the people staring at her, but Monica is there to remind Wanda that she has sacrificed a lot and she would have done the same to bring her mom back if she could. Just before she leaves, Wanda apologizes for everything and promises that she will understand her powers in time.

Post credit scene: Agent Jimmy gives instructions on what needs to be done to help the town. He finds out through Monica that Darcy took off but left a present. Cue Director Tyler Haywood in handcuffs. Monica is taken to a theater by an agent (a Skrull in disguise) who was sent by an old friend of her mother’s and would like to meet with her. When Monica finds out they are meeting in outer space, she smiles.

Second post credit scene: Out in the mountains, surrounded by forestry and water, Wanda is making tea in a small cabin. Beyond the kitchen, in her room, Scarlet Witch is levitating and  reading the Darkhold when she is interrupted by the cries of help from Billy and Tommy.

Marvel Studios truly know how to get us going. It was quite the ride to take. I can’t wait for more. I prefer the way the twins and Red Vision had to leave; better than seeing them die at the hands of Tyler and SWORD. The question is now on where did White Vision go? Clearly, Wanda is taking time to heal as well as learn more about her magic, even if it is from a damned book, but I do hope the two find each other again. Monica was able to use more of her powers but not enough for these past few episodes. I do hope that we get to see more in the next Captain Marvel movie but I hope she pops in on these other shows coming up. Darcy and Jimmy will hopefully show up for Season 2 of WandaVision. I’m certain. Marvel really had us going with the fake Pietro. Had us all losing our damn minds over Evan Peters making an appearance. Obviously, Wanda has a lot of unfinished business between herself and Vision, so we are getting Season 2, but I’m curious as to why she can hear the twins. Where did they end up? In the meantime, we got The Falcon and Winter Soldier to go through, as well as a handful of other Marvel shows and movies. It may hurt but it is going to be fun.