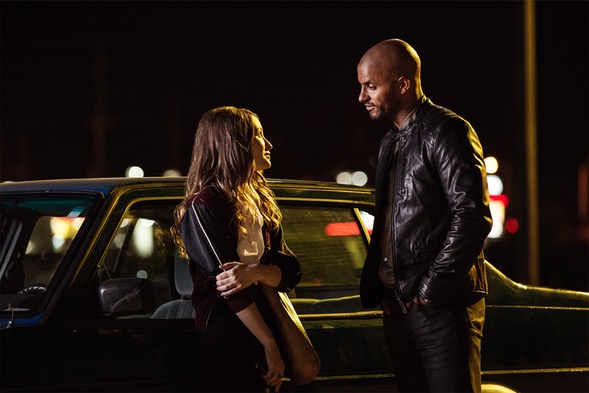 I’m assuming if you’re here then you’ve seen the fourth episode of American Gods. If not, you might want to go ahead and jump ship now because this show is about to be spoiled more than milk left on the counter for three days during a Texas summer…

With a change in tone and subject matter, this episode is dedicated to Laura’s story. It’s a nice departure from the book since we get to see her perspective and understand her a little better.  This episode with Laura Moon was a favorite on Rotten Tomatoes. Last night’s “Git Gone” is currently Fresh at 100%. 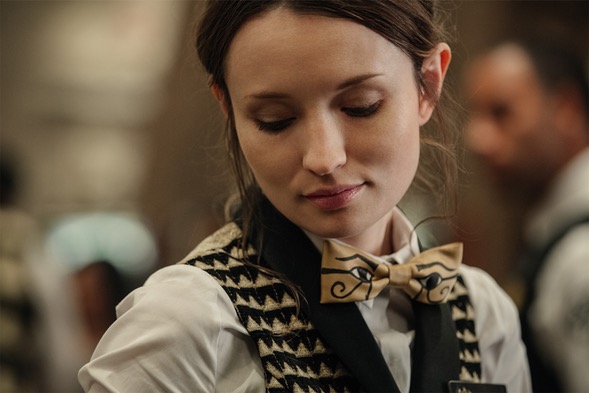 Laura is working in an Egyptian-themed casino, and there are images of Egyptian gods Anubis and Thoth (a.k.a. Mr. Jacquel and Mr. Ibis) everywhere! Remember them? You might have noticed that a very large statue of Anubis stands right behind the table where Laura is working, and directly in front of her table is a large painting of Anubis and Thoth together. There are also two tiny Anubis statues on the table with her, and his name is on the back of her deck of cards. So Mr. Jacquel and Mr. Ibis have been in Laura’s presence for a very long time…

She’s been working her shitty job at the casino for four years leading a shitty life to pay her tuition and rent–a struggle known to many–and is so down that she makes attempts on her life with a bottle Git Gone bug spray. Then Shadow strolls in her casino with his not-so-slick coin tricks and sits at her table.

She takes him home the night they meet (not mad at ya girl), but all that nice loving Shadow was giving wasn’t enough. That’s not really her style. And it’s symbolic of their future relationship–not enough.

Their relationship (if that’s what you call it) grows and develops, and they practice their card tricks with one another, joking about robbing the casino. Neither one of them have much, neither of them believes in anything, and when Laura explains to Shadow why she’s lost her faith in the world, she says he’s looking at her like he’s a lost puppy–and that’s exactly how she treats him.

We finally get to meet the infamous Robbie who’s firing up the grill with his wife, Audrey, and the two couples spend time happy times together–birds flying in the background.

I mean, look at them. They’re just as happy and oblivious as can be, not realizing Laura is going to be the death of them both–literally and metaphorically. 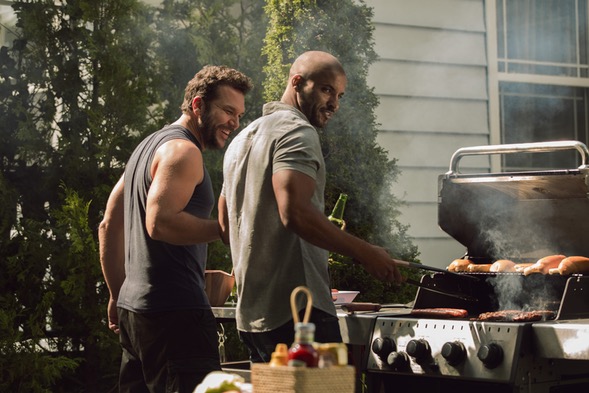 While Shadow is simply happy being with Laura, Laura is bored and tired of her super predictable life. Laura is never happy; she’s never satisfied. And even though he’s laying down that D, it does nothing to make her feel better. She says Shadow is too good for her, and she’s right. It’s clear that he truly loves her, but much like their first night together, what Shadow offers is not enough for her. Their relationship is cosmetic at best, and he feels for her much more than she feels for him.

But oh she has a plan… A perfect plan to rob a casino… That turns into a complete failure because Shadow gets caught and lands his ass in jail! And of course when Shadow agrees to do the time so Laura doesn’t have to (because it was HER idea), he asks if she’ll wait for him, and she says–yes. *insert facepalm here*

We know what happens next.

After her death, Jacquel strolls up, ready to get on with ritual proceedings. but Laura doesn’t want to waste his time. There’s no use weighing her heart against the Feather of Truth because it’s heavier than an anvil.

Touching the scales was taking it a little too far, though. Did you see the look on Jacquel’s face? He looked like, “I know she didn’t just touch my scales!” Jacquel puts her in check because he doesn’t have time for her disrespect, but she gets sucked out of the void thanks to Mad Sweeney’s lucky coin thrown on her grave.

It’s the very least she could do. 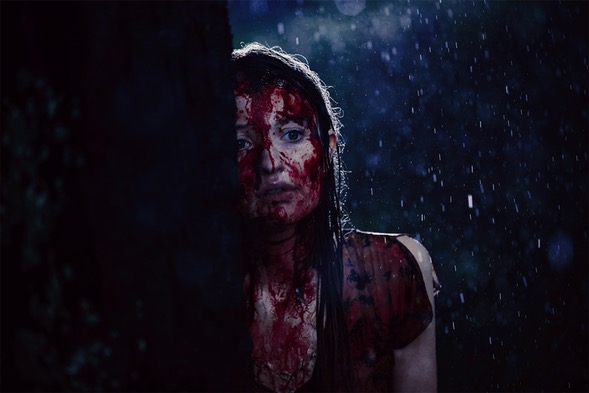 Fourth order of business? Try to attach this arm back to the body, and when that doesn’t work, go to Audrey’s house because she has the craft supplies.

I LOVED Audrey’s reaction seeing her dead, ex-best friend with a missing arm in her house. Aside from trying to kill her again, that pretty much did it. The two of them are quite the pair. Laura literally sits on Audrey’s toilet and shits embalming fluid. Then Audrey tries to sew Laura’s arm back while she tells her how #aintshit she is.

You Light Up My Life

Jacquel and Ibis find Laura and take her to their funeral parlor, and they put Humpty Dumpty back together again. But wait, Jacquel hasn’t forgotten her disrespect. Once she’s done with whatever she is setting out to do, he will complete his task and deliver her unto darkness. Basically, “I’ll let you have this for right now, but you and I aren’t finished.”

Yikes! Death comes for us all in the end…

Then she goes to Shadow’s motel room, and he and all of his shining light walk in. Shocked to death.

Even though this episode was about Laura, Audrey wins this one. She said everything we’ve all thought since Day 1, and she kept it real. I only wish we had more of her. We. Need. More. Audrey. Please and thank you.

“Are we praying?” ~Shadow

“Anger and grief have really just made me vulgar.” ~Audrey

Laura is great at manipulating people to get them to do what she wants them to do–in life and in death. What strikes me as fascinating about her story is that as careless and zero-fucks-given as she was about her life, she had to die to realize she had something to live for. Dying gave Laura a purpose that she never had before. And once Audrey points out that she never really loved Shadow, Laura understands that she loves (or wants to love?) Shadow in the here and now.

She wants to know what love is. *cues the Foreigner song*

I’ll say this, you may like or dislike Laura, but at least she’s self-aware. She knows the type of person she is, the fucked up things she’s done to the people who love her, and she doesn’t pretend to be a saint. She doesn’t really blame other people for her mistakes, which is more than most.

One thing is certain, she loved that damn cat.