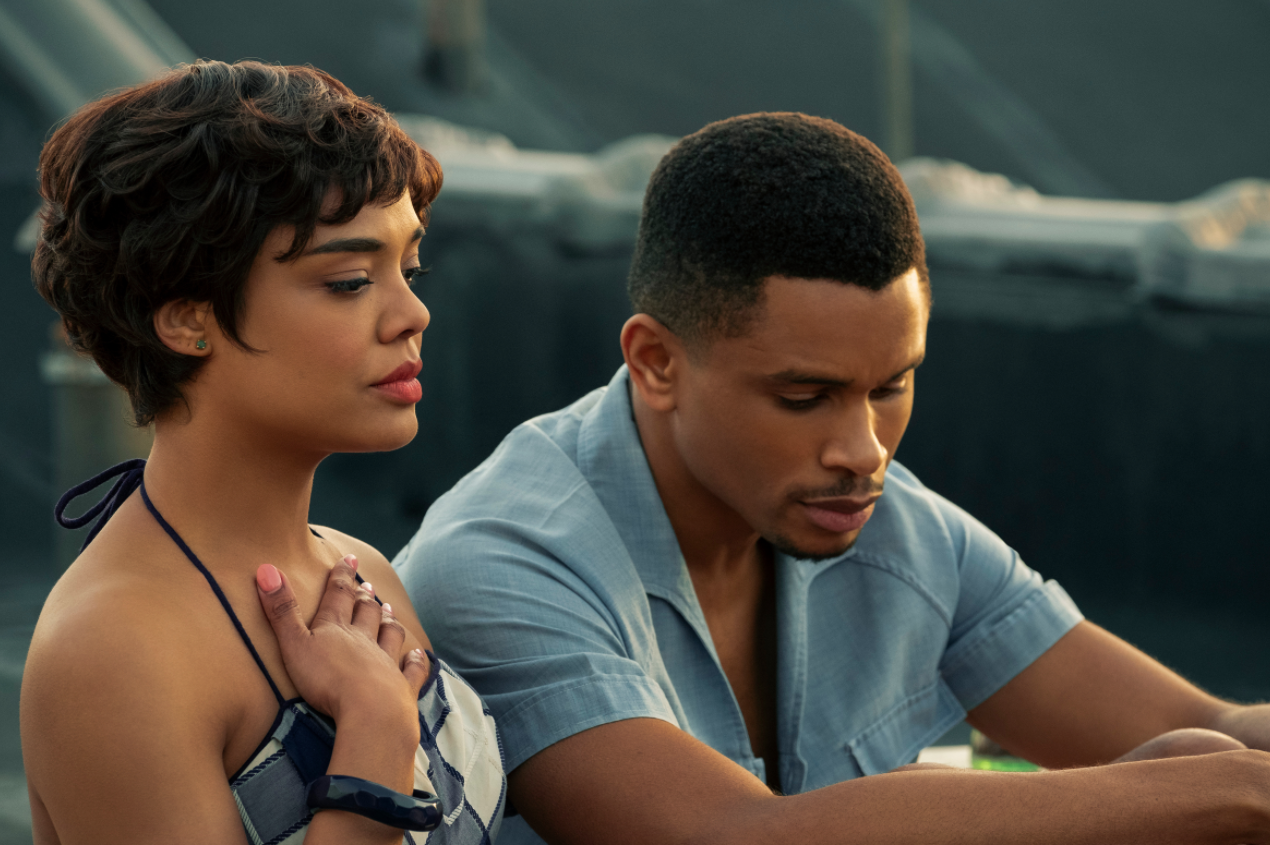 At 110 minutes, in vibrant color with beautiful sets and pretty period clothes, the romantic and sentimental Sylvie’s Love has all the accoutrements for Oscar season.

Set in 1957 New York and moving through the early 1960s, Sylvie’s Love is written and directed by former Sony Records recording artist Eugene Ashe. It’s very fitting that music is the true catalyst in this love story about a jazz musician and a would-be career woman who can’t quite get their stars uncrossed.

Tessa Thompson is the spunky, TV-loving Sylvie, already engaged and working the summer in her father’s record store, when she meets Robert (Nnamdi Asomugha), already a member of a jazz band, needing to work while they wait for their next break. As all romantics know, the next thing is that they fall in love. Two young, super attractive, somewhat sophisticated African Americans in love in the city in the mid-20th century. That’s it.

While there is the problem of the fiancé, there’s none of the racial problems of the period immediately facing Sylvie or Robert; i.e., no one is trying to throw them out of their properties, no one is telling them where to sit or eat or use the bathroom because of the color of their skin. No one is yet telling them they can’t win.

Instead they face life’s non-racial perennial problems: whether to chase a dream or make sacrifices, whether to commit to the safe bet or follow your heart’s passion. In presenting the story this way, Ashe has cleverly paid homage to so many romantic films of the past — from A Star is Born to The Way We Were to Paris Blues, especially the latter two.

Like The Way We Were’s Robert Redford and character actor Bradford Dillman sitting on a sailboat reminiscing about the best years of their lives, so is there a scene with Asomugha talking with pals about the best of times.

Like Paris Blues (1961 starring Diahann Carroll, Sidney Poitier, Paul Newman, and Joanne Woodward), Paris, France is all the rage for jazz musicians Black and white, a place where they are respected and revered, and Robert has to go there.

Sylvie’s Love is filled with romantic moments, some cliche, some so classic they are again refreshing to see. Watch for the moment Sylvie realizes she’s in love while sitting in a jazz club or the scene on the apartment steps as the couple share their first kiss, the marine baby blue gown and side-swept hair straight out of a Doris Day movie.

The turbulent ’60s eventually arrive with mentions of the the civil unrest and a scene showing a friend joining the cause down South, but people in Sylvie’s middle-class, urbane world face their racial frustrations in microaggressions of the time such as the boss’s wife mentioning, at a dinner party, how impressed they were by Sylvie’s husband’s “articulateness.”

Soon she is also working as a TV producer and succeeds at an alarming, no muss, no fuss rate. And that is where Sylvie’s Love lacks. It’s not a fantasy that she or her husband succeed and live in a nice house in a nice neighborhood. This actually happened for many Black people back then, and it certainly happened to the main characters in the many glamorous romantic films of old Hollywood.

It is that little is mentioned of her ambitions until almost half way through the movie. She likes watching TV but there is no dialogue suggesting that she dreams of being a television producer until much later. Strong ambition is usually hard to hide and always a part of the discussions of people in relationships, especially people deeply in love. Yet during their love affair only Robert’s work is discussed.

Streisand’s character’s uber liberal politics were never lost on Robert Redford’s handsome but apolitical man of her dreams, no matter how much he loved her in The Way We Were.

Despite the many romantic settings and lingering looks, the chemistry between Thompson and Asomugha is lacking and no match for the sexy smouldering of a young Poitier or Carroll in Paris.

Asomugha, starring in his second film for Amazon (the first was Crown Heights), is already being praised for his acting chops and has some good credits, yet Thompson, doing double duty as one of the executive producers, is the powerhouse that makes you believe these two could be in love.

The two main actors get really good backup from Erica Kimbel as Sylvie’s well-meaning bougie mom, Lance Reddick (John Wick and Bosch) as her warm-hearted dad, Aja Naomi King (How to Get Away with Murder) as her friend, Jemima Kirk as a concert promoter, and Eva Longoria in a surprise casting.

Overall, Sylvie’s Love is a good effort from all involved and a homage to those romantic movies of the past.