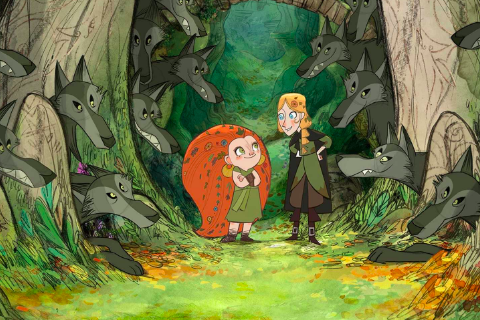 Animated films are one of the best ways to get audiences of all ages to sit down for a few hours and enjoy an entertaining and powerful message. Wolfwalkers (2020) engages audiences with a captivating and incredibly inspiring narrative.

While many might consider animated films to be a throwback to their childhood, this particular production promotes a more caring message about accepting one’s own shortcomings and building friendships. Wolfwalkers is an entrancing fantasy adventure film that asks tough questions about love, sisterhood, and loss.

Cartoon Saloon has produced two Irish mythology movies, Song of the Sea and Book of Kells, and has managed to stumble upon a powerful storyline with their third chapter, Wolfwalkers. Directors Tomm Moore and Ross Steward together have constructed a story that is rich with a unique magic that makes this film standout above the other two. Between its beautiful mixture of 2D art styles and the themes it tackles, the production team along with their writer, Will Collins, have transformed this film into a work of art.

The story begins with images of deforestation and wolves attempting to scare off the locals who are attempting to destroy their home. The mother of the pack is Moll MacTire (Maria Doyle Kennedy), and Mebh MacTire (Eva Whittaker) is the daughter. They are both described by a local as wolfwalkers. A wolfwalker is a magical person who lives in the woods with the wolves. They have a magical ability to heal and transform into wolves when they sleep. During the destruction of the forest, Moll comes out to heal a man who was harmed in the crossfire. This act of kindness is returned in kind with the townspeople who come out with weapons and fire in hand ready to attack the wolves.

Robyn (Honor Kneafsey) is a strong, fearless, curious girl who has a thirst for adventure and freedom and who wants to fight by her father’s side. We are introduced to her in her home where she is playing with her weapon and cleaning up the house. Robyn’s father Bill Goodfellowe (Sean Bean) is a wolf hunter who is trying to keep, as best he can, a promise he made to his wife that he would keep Robyn out of from harm’s way.

While Robyn attempts to adhere to her father’s wishes, she is nonetheless drawn to the outside world. The relationship these two characters have is a complex one. When Bill is forced to confront his daughter’s questions about why she must listen and do what she is told, her father responds with, “It’s because I’m afraid.” Robyn then understands her father a little better. Sometimes parents don’t always know what must be done, and sometimes they fear the consequences that might happen. Children are sometimes hurt by these decisions, and this film does a phenomenal job at making all parties aware of this.

One of the primary focuses that truly stands out in this film is how close the two girls become with one another. From the start, it is established that Robyn and Mebh come from two different worlds. Robyn has lived most of her life in England, and Mebh lives in the wild with her mom. These two girls each represent a different aspect of life and a different culture. When the two meet, it is in less-than-ideal circumstances. Mebh has transformed her spirit into a corporeal wolf that Robyn tries to hunt. Unable to capture the wolf, Robyn falls for a trap and ends up hanging upside-down. Wolf Mebh attempts to help her down and accidently ends up biting her. Through this small bite, some of Mebh magical abilities are transferred to Robyn. Now the two girls have a unbreakable bond that is special and uniquely theirs.

The film is not without its powerful message of constraints and freedom. Recently hired by Lord Protector Oliver Cromwell (Simon McBurne) in the town of Kilkenny, Goodfellowe has moved with his daughter for a better life. Robyn feels trapped by civil society and scullery work in the new town. Locked away in the fort’s walls, Robyn longs for something more. When she interacts with the wolfwalker Mebh, she begins to forge a stronger connection with the wolves she sought to get rid of.

The theme of sisterhood and loss all build for a powerful moment where the ideal meets reality. When society meets with the wilderness, havoc ensues for the two girls. Robyn is placed in a hard situation where she is forced to decide between what her father values (safety) and what her friend values (freedom). Ultimately a choice must be made, and something must be given up. This is the pinnacle of the film, and one that has a powerful message behind it.

Wolfwalkers ends with a truly heartfelt story about love, loss, and sisterhood. While many might feel compelled to title this a children’s movie, and perhaps it does appeal to that audience, this particular film is one that transcends ages. There are so many hidden messages in this amazing film. It is undoubtedly a film that the whole family can enjoy and learn from. If you haven’t had a chance to watch it, it should be on your list to watch soon.

The animated film Wolfwalkers is currently streaming on AppleTV+

The ‘Wolfwalkers’ Creators Discuss the Hidden Message Behind the Film