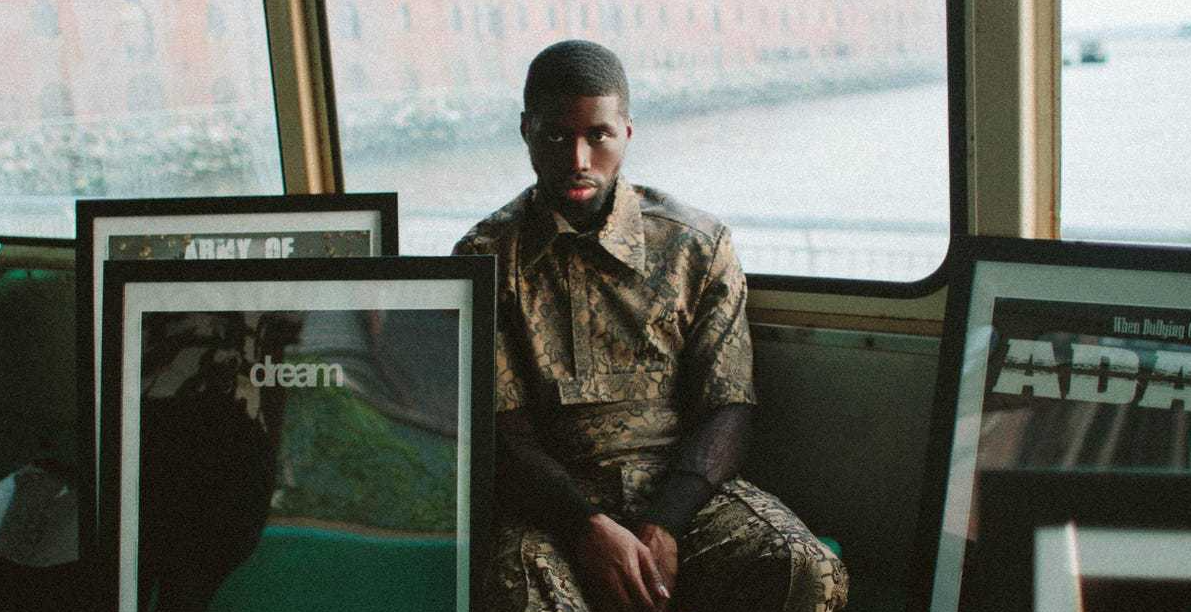 With an upcoming film that will soon be featured on Prime Video, WriterBoy (born Brandon George Washington) wants everyone watching to know a few things about his latest film, Dream.

In our online Zoom interview, WriterBoy was dressed warmly for this cold winter season, he wore a black beanie, a deep Aegean blue turtleneck, and, to tie the whole outfit together, a white chain around his neck. All these meticulously selected articles of clothing show how ready for the interview he was.

His enthusiasm was boundless, and his answers seemed endless. Each answer appeared as carefully selected as his wardrobe was.

Can you tell me a little about this movie, Dream?

Dream is a feature film about this young kid. He ends up getting in a car accident with his mother, and his mother passes away. The story is about him growing up in the foster care system, having nothing and no one but his dream. He dreams of being this amazing writer, and the entire world is telling him that he can’t, that it won’t ever happen. It’s loosely based on my life.

That’s so fascinating. Can you tell us how much of this is based on you?

The film talks about the ins and outs and difficulties of this writer, dreaming, pushing, and fighting to become something more. So, a lot of scenes in the film are actual scenes that happened to me, in my life, growing up and fighting to be someone in this industry.

Did you want to be a writer when you got older?

I’ve always written since a young age. I published my first book at seventeen. Before publishing a book, I had written so many stories. It was an escape from the world that I was in. I wanted to create something different. I wanted to become someone different.

You have created some unique characters in your film. Where do these characters come from?

A lot of the characters in the film come from real people. The best friend in the film, Brian, represents that person in your life who may or may not believe in you. But at the end of the day, you never really know. Everything is everything; nothing is nothing. And something is always something. He represents that idea.

The social worker is Diane. She represents a person who is very grounded in this world. As dreamers, we think that we can, we will, and it shall be done. But she’s the opposite. She is a realist. Just because you believe in your dream doesn’t mean that everyone else is going to believe in it. She’s that person. She shoots down dreams a lot, but it comes from a place of love, and that’s her.

What’s challenging about bringing this script to life?

The most challenging aspect of bringing this film to life was understanding that what I wrote as a creator was not going to be what the final product is. Because this is an independent project, it wasn’t as structured as the network would have liked me to be. I wanted my production filled with dreamers. From my production to the actors, I wanted dreamers to surround this project. If I have dreamers, even on the outside of it, when you’re watching this film in front of that screen, you’re going to feel it. It’s going to feel like this was made with love and passion. And so that’s what I wanted. With that comes understanding that this artwork is going to take a form of itself. I was trying to contain it to make it something, and then I let it go. And I created something amazing with it. I couldn’t have made it better.

It’s about a moment in time. Right now, it’s time. You don’t have to settle or accept what the world has given to you; you can create something new. There are so many things that have changed since I wrote the film two or three years ago. This is our moment; this is my moment as a dreamer to let everyone that is dreaming right now know that it is achievable. You can do it, and let me give you the steps to do it. Let me show you how.

What will the audience be thinking after they watch the movie?

How does your film stand out from the vast majority of inspiration films out there?

Dream is very modern and is for us. It’’s for my generation; it’s for my people. That’s why I wanted it to be fun. The difference is that this is for us, the new generation that is coming, to let them know that it is achievable. This is for this time.

What would you say will surprise audiences about your story?

My story in general, or my film story? Which one? Because I’m going to be honest.

I’ll say this about Dream. The main actor, his name is Terrell Brown, didn’t understand what he was getting himself into. He became that character. I don’t think people will understand, even when it comes down to the mental components of crafting the film, how heavy it was for him to play that role. We shot for almost a year and a half. There was one scene where he was crying on set. And when I yell cut, he’s still crying. Then he falls to the ground and production has to come and pick him up. It was another scene where he was running away from something. When he packed his bags and he ran out of the room, he ran past the camera, he ran off the set, and production had to go get him. He really became that character.

When they see WriterBoy, they expect to see “WriterBoy” and I am him. But I’m human just like you. They were expecting me to win 24/7. As if I win every goal, every goal that I accomplished and every fight that I fight, I just knock them out there. I didn’t get here because I won all my fights. I got here because I never stopped fighting. I wrote Dream to let people know that I’m human also.