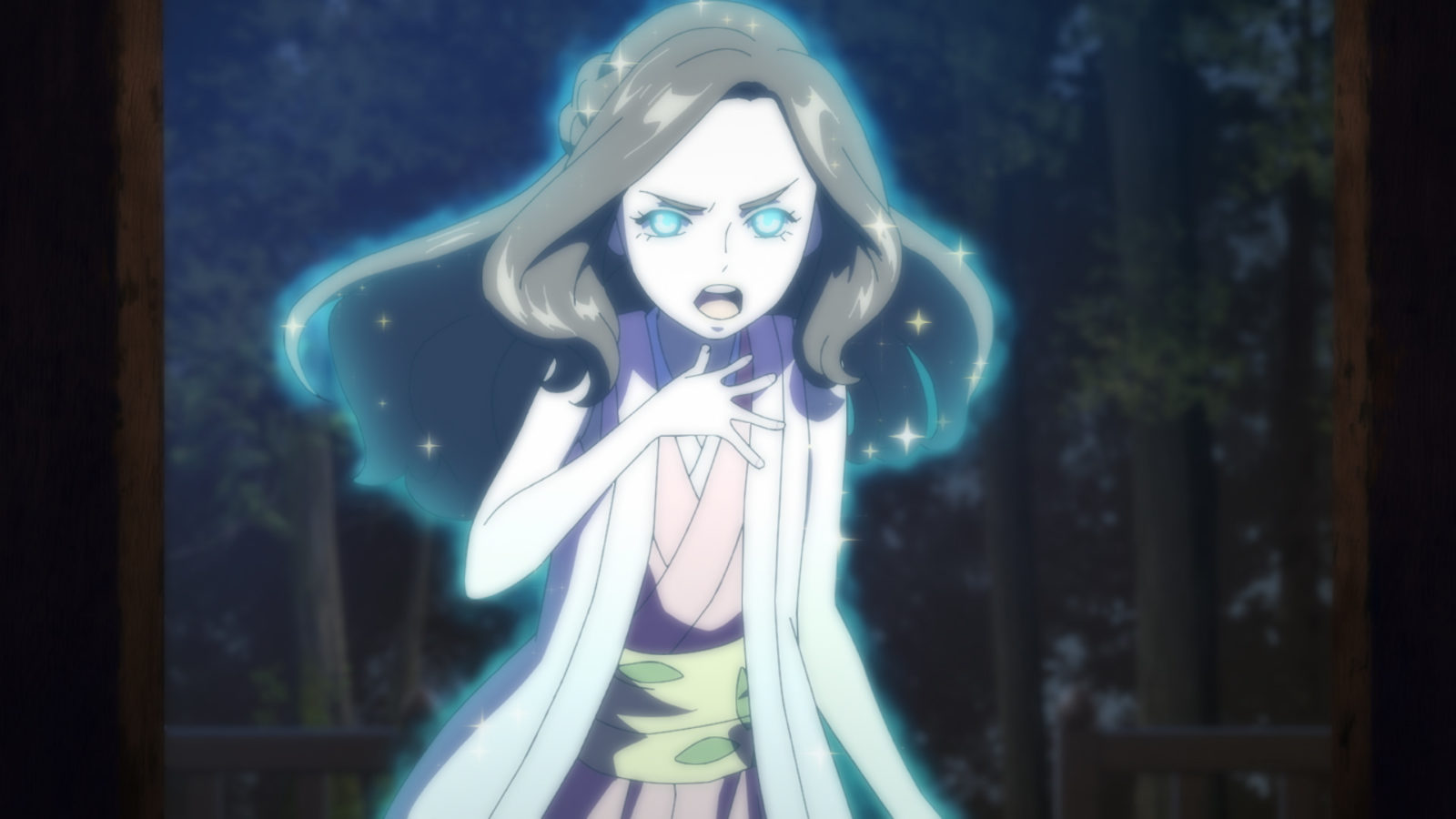 Yasuke emerges from the river fighting for air and swims to the banks, then passes out.

Azuchi Castle 1581: Nobunaga gives Yasuke a history and power lesson. Nobunago feels that his son needs to learn this. During training, Nobunaga surprises his men by watching them, then informs them that Yasuke and Natsumaru will be going to the parley against the Iga general. However, the military leader, Mitsuhide, doesn’t think that having an outsider like Yasuke would be good and thinks that their enemies won’t respect them or that the people will accept him. Nobunaga states that they must move forward with a better mindset and pretty soon he will be leading the people to a new world. Natsumaru tells Yasuke not to worry about Mitsuhide. The fact that Nobunaga has so much faith in Yasuke rubs Mitsuhide the wrong way. Also the man feels some kind of way about her being in the ranks as well. Yasuke notices the necklace around her neck. She informs him that it is a medallion that was handed down from generation to generation.

In a cemetery, a priest speaks to the tall woman about finding the child. They inform him that Ichika and Yasuke were easy to handle, but she points out that the child is powered and they will need more money to capture her. The priest says his god will provide what they will need. He jumps into an open grave where a busted-up man is being held. The priest shushes him and asks him who is the Black boatman, promising him freedom for the information. The poor man provides the information but doesn’t have a name to give the priest. His neck gets snapped. Another of the attackers asks why they can’t kill the girl; the priest responds that the girl is key to controlling Europe and the Catholic Church.

Iga Province 1581: Mitsuhide arrives at the outer wall of the Iga clan with his soldiers and tells them his reason for being there, then demands surrender. The Iga general states that he doesn’t recognize the woman or slave as samurais and finds it insulting that Nobunaga would disrespect their culture in such way. He demands that they send over the Black samurai to show him what they are capable of. Mitsuhide goes back to his men to inform them of what was said. He points out that the people will not surrender to Yasuke because they will always see him as a servant, no matter if he wears an armor.

Yasuke rides his horse over to the wall and speaks to the Iga general, stating that Lord Nobunaga will take their surrender if they lay down their weapons. The Iga general will not and insults the lord. Yasuke gets off his horse and engages in a sword fight with the general, disarming him. When he tells the general to kneel, he is answered by a cluster of the Iga army opening the door and coming out. Natsumaru moves to assist but Mitsuhide stops her and says that things will be handled the old way. Yasuke shows that he doesn’t need assistance and slices through every one of the Iga samurai, then says a prayer for them. Mitsuhide looks disappointed then rides off saying that there was no honor to be had there, just pain and blood.

The priest and his bounty hunters (I think that’s what they are) find the spot where Yasuke had the campfire and figure out that the girl was there, too. Yasuke enjoys a drink at the bar while an  unhappy Saki thinks that they should go to the doctor. Yasuke questions her on her knowledge about the doctor or where he is located, then informs the girl that her mother didn’t live through the attack the night before. Saki, upset, runs out of the bar then falls to her knees, sobbing. A bit of power glows around her.

Yasuke and the rest of the samurai eat to their victory. Natsumaru sits next to him and points out that Nobunaga is celebrating Yasuke’s victory and so should he. Yasuke feels some kind of way about the victory. She asks him if he believes in Nobunaga’s quest to unify Japan. The two discuss unifying the country and how it would or would not free them of conflict. Natsumaru points out that their victory resulted in the Iga clan’s women and children being slaughtered but catches herself and quickly says it was a complete victory for a noble lord.

Nobunaga arrives and makes a toast about a united Japan that will be free to do whatever they want with whom they want. He calls Yasuke up to the front with, calling him son and telling him that he is proud. He has everyone celebrate with a drink, then leaves with Ranmaru, a woman he keeps close by. Mitsuhide is not impressed and tells Yasuke that the old way was Yasuke being treated as a servant and not better than Nobunaga’s sons. Yasuke says the old ways should be left in the past, and Mitsuhide states that maybe he himself should be, too.

While still in the bar, Yasuke is joined by the bounty hunters. The priest walks in, drinks water, then tells Yasuke why he is there in regards to Saki and how she is important to his plan to bring peace to his land. Apparently, Saki was given to be cared for by a woman who would later steal Saki from him and that she probably lied about who she and Saki are. He asks Yasuke for the location of the Saki. Yasuke nonchalantly points out that a servant cannot lead without submission then quotes Romans 12:11. Yasuke continues by saying servants will always be servants, that’s the old way. The priest asks where the child is, but Yasuke doesn’t answer.

As the priest leaves, a fight breaks out between Yasuke and the bounty hunters. People scatter as the attacks happen. During the fight, the robot gets hit with liquid and his trigger goes off, damaging anything and anyone. Luckily Yasuke comes out just fine, but as the fight progresses, he is overpowered and taken down.

The priest is truly a creepy man for someone in a white cloth. His smile never seems to waver even while working with supernatural bounty hunters and killers. No man should be that chill about a beat down. What could he possibly want with Saki? Yasuke is highly favored by Nobunaga, which is causing trouble in the ranks. Not only is he Black but now he is also the most liked. I wonder about his relationship with Natsumaru and how it turns out.