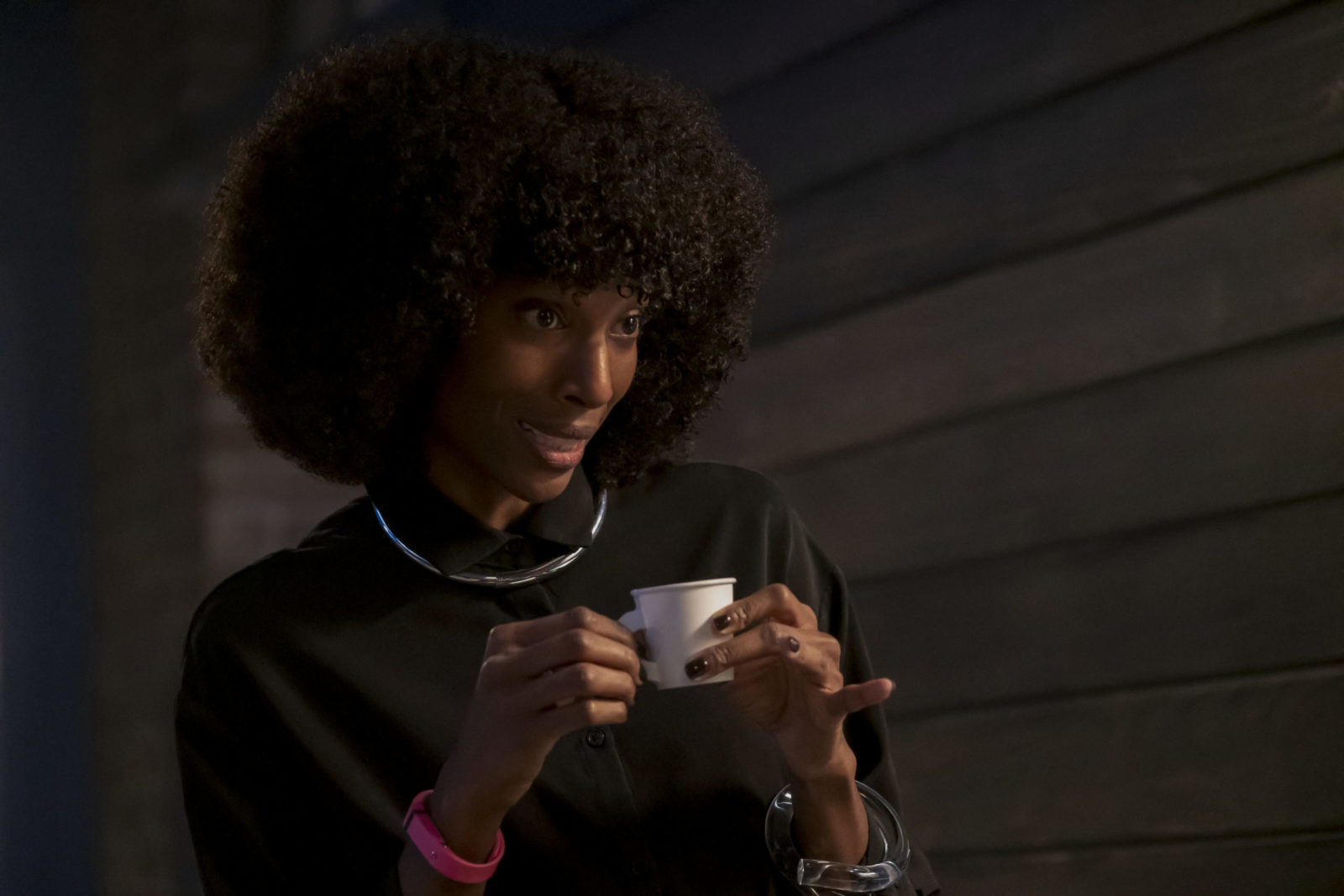 Johnson is also known as a semi-finalist on NBC’s Last Comic Standing. In 2016, Johnson appeared on the HBO special All Def Comedy, and she currently co-hosts the Netflix series 100 Humans. She was named to Variety’s 10 Comics to Watch for 2019.

The series follows app developer Nathan Brown (Robbie Amell), who has been killed in a self-driving car accident. He’s uploaded to his fiancé’s family’s fancy virtual afterlife, the Horizon company’s “Lakeview.” Nathan meets his new customer service guardian angel Nora (Andy Allo), who helps him navigate the virtual afterlife. Nora confides in Aleesha (Zainab Johnson) when things get tough. Whether it’s for friendship support or hilarious comic relief, Aleesha has Nora’s back. To find out how amazing it was to be a part of Upload, BGN got Johnson to spill the tea on her experience.

How did you feel about being cast as Aleesha? What drew you to the upload team?

I signed on to the pilot as a guest star. Remember, the character that I read for the first pilot didn’t really have a character, wasn’t Aleesha. When I was cast, they gave her a name and that made me feel like, “There’s probably a part of this character that is me,” like maybe Greg saw something in me that was, “Oh, OK, we can put that in. We can create this character in line with her.”

Once I read the entire pilot, I went to the table, read, and met all the other people that were cast. I felt like it was such a good group of people. It was such a smart and fun and supportive group. I think I’m lucky to be a part of this.

I love that. Do you wish that you could upload yourself into your preferred afterlife? If so, what would it be?

If I could upload into my preferred afterlife, like my, you know, utopia, it would probably involve the beach with white sands and clear water. And it would have all my favorite foods and all my favorite people. At our optimal selves. Like my sister, when I love her the most, when she’s the most funny. Possibly I’d have the ability to have experiences that I didn’t get to experience before I uploaded into that afterlife, like, I didn’t get to go on a safari. So, make sure you put a safari there.

I can experience it, you know, but if we had the option to upload into some virtual afterlife today, I’m not sure if it’s something that I would choose. There’s a part of me that doesn’t trust other human beings and doesn’t trust my existence being in the hands of somebody that’s at work.

I was really nerding out over all the tech of the cars and things like that. But it also shows some of the flaws that exist in modern technology. Do you think the show highlights some of those risks of expanding technology?

Absolutely. And I think that we all know that there are risks when expanding technology. But the way Upload shows it at the very beginning is when someone tries to download and it’s on national television. If we saw that happen today on the news, I mean, it would change the world forever. If you lose the cartridge or upload, you’ve lost the person. I think that we do start those conversations so that everybody who watches thinks about that. We want you to enjoy it.

What has been your favorite moment with the cast?

It’s funny because I’ve had some moments that were wonderful. There’s a scene where Nora is telling me about this encounter with Mason, and I’m just shoving a falafel down my throat. Right? And I remember the director was like, “I want you to be eating in this scene.” And I was like, “I don’t think I can eat and talk.” And he was like, “I know, but that’s gonna be funny.” I feel like in real life, I do that like when I’m listening to a friend and watching a show. I’m just like, shoving things down my throat.

I remember one moment during that scene, the falafel is in my face and around my mouth in such a funny way. I think in my regular life, I’m normally not that vulnerable. You know, I would never want to be in front of a group of people with a bunch of white stuff around my mouth.

Another moment was when I was in Vancouver. I went [with Robbie] to my first hockey game ever. For Robbie to be Canadian and to be walking me through every single aspect of this hockey game was amazing.

How has being on Upload given you the opportunity to flex your comedy chops and express yourself as a comedian through the show?

Upload has amazing writers and amazing creator, but really great comedic directors. For me, it was trusting. It was trusting what was on the page. Trusting what I was directed to do and then trusting my own instincts.

It took me a little while to find the balance, whether you see it or not, of my own processing of it all. It took me a while to decide what I would do, what Aleesha would do, what’s being written in, what it’s supposed to look like, what will be funny versus what’s played to be funny, if that makes sense.

I remember two things with Greg. I said one line. It’s a big scene, but it’s small dialogue, and I got it right. He comes in, and I was like, great. But then I remember another time where I chose to say a line differently than it was written. And as much as it was funny that way and I felt funny saying it, I mean, it felt easier to say it felt more genuine to say it like that from Zainab.

Greg came to me. He said, “I trust your comedic instincts, but it’s written this way because it informs something in the future. If you say it the way you’re thinking it, we won’t have the information that’s needed in the next scene.”

I think that me being a comedian, I had the default setting of trusting myself. But as a comedian, I get to say my own words. On Upload and different television, I’m trusting somebody else’s ideas and somebody else’s story. It was such an enjoyable exercise to merge the two. I think that this experience has helped my standup, and my standup has helped this experience.

Upload premieres May 1st on Amazon.