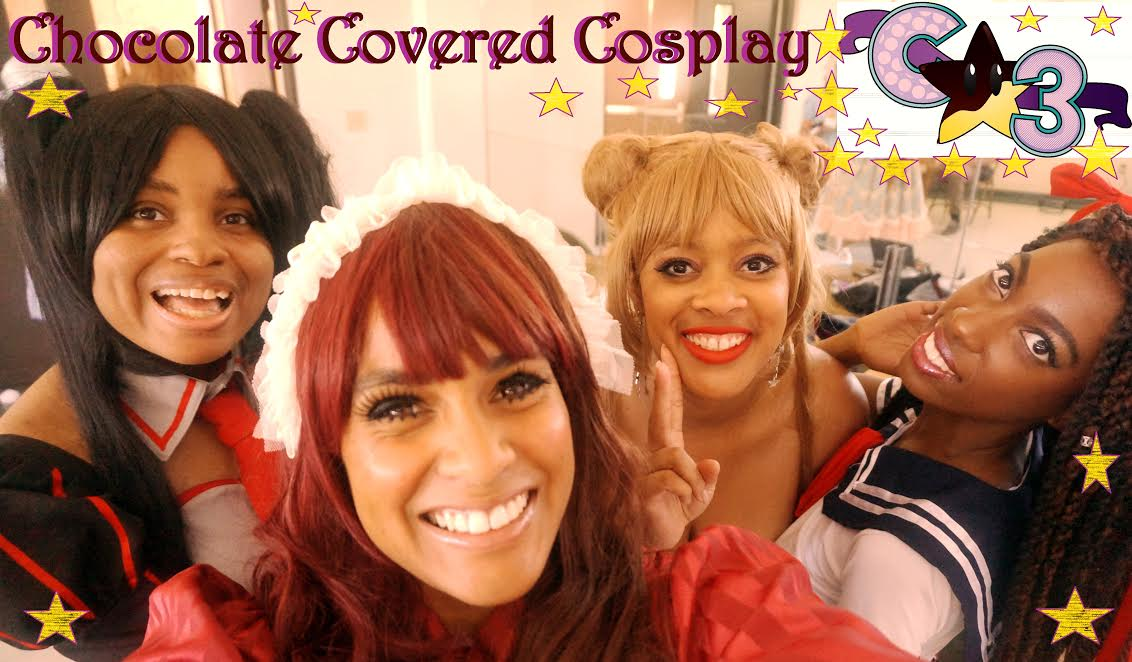 0 Shares
0
0
Tweet
Pin
Share
Reddit
Share
Share164
Email
164 Shares
It’s that time of year! We’re kicking off #28DaysOfBlackCosplay and our first feature is with Chocolate Covered Cosplay (C3 for short). Hailing from Los Angeles, CA, C3 has been killing the cosplay game with equal parts sexy and kawaii. From cosplay calendars to convention panels these ladies are making their mark in the geek community.Be sure to follow these fabulous cosplayers on facebook to keep up with their progress and adventures! Facebook.com/chocolatecoveredcosplay

Ashi_Chan: Pittsburgh. CA;
Pei Pei, GNB Cosplay & Angel Tenshi: Los Angeles, CA
How long have you been cosplaying?
Ashi_chan: 10yrs
Pei Pei: 8yrs
GNB Cosplay: 9yrs
Angel Tenshi: 6yrs
What was your first convention?
Ashi_chan: NEKOCON, it’s near Hampton, VA
Pei Pei: Anime Expo
GNBCosplay Anime Expo
Angel Tenshi: Anime LA
What was your first cosplay?
Ashi_Chan: Mamimi from FLCL;
Pei Pei: Natiri (Avatar);
GNB Cosplay: Link (LoZelda Ocarina of time);
Do you feel you have a cosplay expertise? If so what would it be? (i.e. props, sewing, etc.)
Ashi_chan: When I first started I special in Props, but now I would say sewing and draping. I also am very good at wig care.
Pei Pei: I am a self-taught seamstress and artist, so sketching/painting and sewing are my strongest skills.
GNB Cosplay: Pattern Making and sewing are my strongest skills. I’m slowly experimenting with armor building.
Angel Tenshi: Make up techniques are my strongest skill, but I am also great at creating OC characters and bringing their personalities to life through photos. I am also great at directing posing for photo shoots.
What have been your least and most expensive cosplays?
Ashi_Chan: Least expensive was probably Poison ivy. It was one yard of fabric and a bag of ivy from the dollar store. The most expensive item on it was the wig. The most expensive costume I made was either Asgardian Storm or Kira from Guitaroo Man. The Guitaroo, though made of chicken wire and paper mache, had a lot of paint and paint isn’t cheap.
Pei Pei: My least expensive was Hsienko cosplay. The most expensive were my Jinx cosplay since I had to purchase the materials for the props, accessories, wigs, etc…
GNB Cosplay: I’m made so many, its hard to say… but perhaps Kiki (Kiki’s delivery service) was the least expensive since I only needed 2yds of fabric and a $15 wig. The bow was made out of left over fabric from a previous cosplay. As for most expensive, I would probably say Gamora because I had to buy several wigs to make sure the green would match the makeup correctly. I also had to purchase so much makeup to paint my entire body with, not to mention I spent a good 8yds on just her cape.
Angel Tenshi: My least expensive cosplay would be my school girl uniform. I bought the sailor top from eBay super cheap, and the skirt I found at the thrift store for $3!
What is your favorite convention to attend?
Ashi_chan: I do love Katsucon and Anime, Los Angeles. Both inside during winter and I love a good hotel con. Everything is close and no need to feel the weather unless you wanna.
Pei Pei: Anime LA
GNB Cosplay: Anime Expo, probably because it was my first con, so I’m biased towards it, haha, but Anime LA is a close 2nd, since it is such a welcoming and loving con.
Angel Tenshi: Anime LA
What is your dream convention to attend?
Ashi_Chan: DRAGONCON. And a con in Hawaii….. But that’s for reasons lol.. (ironically, my whole family has been to Dragon con…but me)
Pei Pei: DragonCon!
GNB Cosplay: DragonCon. I have heard so many good things about this con, which I must go! I’d love to go out of the country too!
Angel Tenshi: I would love to go to a convention in Japan. The experience is so different since there are rules about wearing costumes only in certain areas and such.
What is your dream cosplay?
Ashi_chan: Goddess Madoka/ Super Sailor Moon. So much fabric and so expensive….. But I wanna do it right
Pei Pei: Fran from Final Fantasy 12
GNB Cosplay: Spawn, from the 90s movie Spawn. I want to make a movie accurate costume and mask. It’s crazy, but I would love just to be Spawn haha
Angel Tenshi: Bringing one of my OC’s to life. She has these crazy huge shoes with a very small bikini.
What do you hate about cosplay?
Ashi_Chan: That I get called the Black version of things, and I have to explain why Blackface is wrong. There is very little intersectionality of race and culture. And that sucks
Pei Pei: How time-consuming creating the costumes take.
GNB Cosplay: Same as what Ashi mentioned. I also don’t like that any average cosplay blog shows the same type of cosplayer. I hate having to scroll through pages and pages until seeing someone who looks like me.
Angel Tenshi: The bullying and the gate-keeping is what I hate most. We are all nerds; we should just enjoy our fandoms. I have Captain America’s symbol tattooed on my body, and people still come up to me and to try to quiz me on my knowledge of Captain America.
What do you love about cosplay?
Ashi_Chan: The rest of the community. I love that It brought me and C3 together. Those ladies are my SISTERS. And we all grow together. Also creating something from nothing is awesome, and I love to play dress up and be the character.
Pei Pei: Being able to immerse myself into the character I love for a few days!
GNB Cosplay: I love that I can pretend to be someone else for a few days. Cosplay has helped me break out of my shell, and has allowed me to travel to places I may not have traveled to sooner. For example, I was able to go to Katsucon in Washington DC since I competed in the World Cosplay Summit. I was able to visit the White House, the Lincoln Memorial and other sites on capital hill.
Angel Tenshi: Being able to put looks together involving makeup, wigs, and different pieces of my cosplay pieces. I love being in front and behind the camera to make my vision come to life!