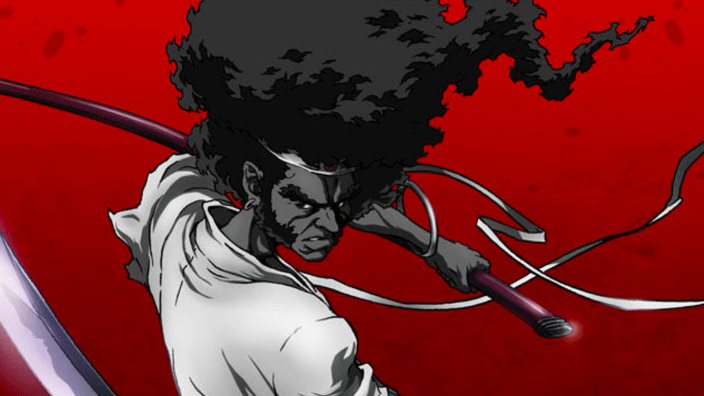 When I think of strong anime leads, a few prominent characters come to mind who just so happen to be Black.

Anime evolved along the years, showing more diversity in their cast and giving the spotlight to characters with darker skin and various hair textures — everything from dreadlocks, braids, afros, and curls.

Black anime characters have continued to add these complex and dynamic roles in their series. They’re not only taking center leads in shows, but also influencing more Black kids, teens, and adults worldwide to watch anime and to partake in anime conventions. Being an avid anime binger, I thought I’d share some of my top 20 most iconic Black anime characters.

The numbers are based on no particular ranking.

In the Afro Samurai Movie, Afro is the first character that comes to mind when I think of a kickass Black anime lead. He and his counterpart Ninja Ninja, voiced by Samuel L Jackson, go on a journey of revenge against samurais who stand no comparison against Afro’s sword.

Cowboy Bebop “You got to listen to your dreams, that’s how you find your dream girl.” Jet is captain of the Bebop and an all-around charismatic character. He’s an ex cop turned bounty hunter. Jet is known for his big build and robotic prosthetic left arm. He’s among the most feared bounty hunters in the galaxy, but around Spike, Ed, and Faye he’s a chill and mellow guy.

Cowboy Bebop’s Radical Edward or Ed for short is an insane hacker brainchild. She wins the hearts of the bounty hunter squad after she hacks Spike and Jet’s ship Bebop. She’s a genius but is socially awkward. Ed is like the little sister of the crew. Getting on everyone’s nerves, but still being able to save the crew from disaster.

Although Kofi makes a small appearance in Cowboy Bebop, it’s still best that she be mentioned. She’s a tall dark skinned Black woman with an amazing fro. She makes her debut in episode 17 of the series.

Bob from the anime series Tenjhe Tenge, is a tall and lanky gent with dreads. I always wondered if the writers were inspired by Bob Marley — but in anime form. He’s part of the Juken Club and kicks ass regularly, but still manages to find ways to doubt his training and capabilities.

Atsuko is the strong-willed Afro-Latina cop who rocks a large blonde afro in Michiko to Hatchin. Atsuko’s main mission in the series is to catch Michiko, a prison escapee. The wild part about the pair is that they grew up together in an orphanage. The two just so happen to be on completely different paths in life. This anime is set in Brazil with a diverse cast as well.

Now I wasn’t big into Jojo’s Bizarre Adventures at first. The first few episodes were a bit slow, but I’m glad I stuck to it.  I was pleasantly surprised to see Muhammed Avdol, who is a fortune teller in the series. He’s also the voice of reason among his team members. What makes me love Muhammed even more is that his hairstyle closely resembles bantu knots.

Boondocks’ Huey is one of my woke faves. He is undoubtedly known for his quirky comebacks and occasional martial arts moves — run up and get done up. He’s the complete opposite of his rambunctious brother Riley Freeman who’s best known for all his sh*t talking. Regardless of their differences, they still have each others back.

Although Tosen is an antagonist in the anime Bleach, I would be doing this list a disservice if I didn’t mention him. His pupil-less eyes is what makes him so badass, aside from his long braids. Who said we weren’t allowed to like the bad guys?

Bleach’s Yoruichi is of noble birth and a former leader of Onmitsukidō. She’s known for being the only character who can transform into a black cat. She’s usually in cat form for long periods of time.

Sword Art Online features my favorite shop owner named Agil, known for making weapons and being a beast with an axe. He’s always friendly and kind — even spending his own money to help some of the mid-level players level up.

In Neo Yokio, Kaz Kaan is the main character profiled on the Netflix original anime, voiced by Jaden Smith. Kann is very self conscious of what others think of him. He’s conflicted most the time by his peers, all while trying to take out ghost and demons.

In One Piece, Kuzan aka Aokiji is part of the Blackbeard Pirates squad. He’s one of the most laid back characters in the series. With his charm and calm demeanor, it’s easy for people to overlook Aokiji’s skills, that of which he has a lot of.

Piccolo first appears in Dragon Ball Z as an antagonist, who eventually grew to steal the hearts of anime lovers across the globe. He makes a transition from an anti-hero to a hero nonetheless. He takes the cake when it comes to being one of my favorite Dragon Ball Z characters of all time!

In the anime Hunter X Hunter, Canary is known for being a servant of the Zoldyck mansion. She first appears guarding the house. Then Canary beats Gon to a pulp when he attempts to cross a line she draws in the dirt. This character does have a soft spot however, for the character Killua. She’s a monster with her staff.

In Darker than Black, April is a hardcore drinker and hurricane maker. She’s best known for being contracted by the British intelligence agency and her purple coat with the fur around the neck.

Darui is dark skinned with blonde spiky hair in the anime Naruto. His best known move is when he aligns his chakras, emitting light to temporarily blind his components.

Killer Bee is an extremely powerful shinobi in Naruto Shippuden. He was chosen as the Supreme Leader of the Allied Shinobi Forces. He’s best known for his strength, speed, and lighting chakra capabilities. The way his blonde hair is parted, they almost resemble cornrows.

Avatar’s Katara is my favorite waterbending master. She takes on more of a motherly role and eventually becomes the main waterbending teacher to Aang in the series.

Kilik in Soul Eater is known to be one of the top performers in his class. He’s one of my favorite of his trio for his fighting spirit and his weapon partners who are Pot of Fire and Pot of Thunder. They’re worn as a huge gauntlet on his hands.

Did I miss a few? Comment your faves down below!

Netflix’s ‘Cowboy Bebop’ Doesn’t Quite Hit the Mark, but Gets Close