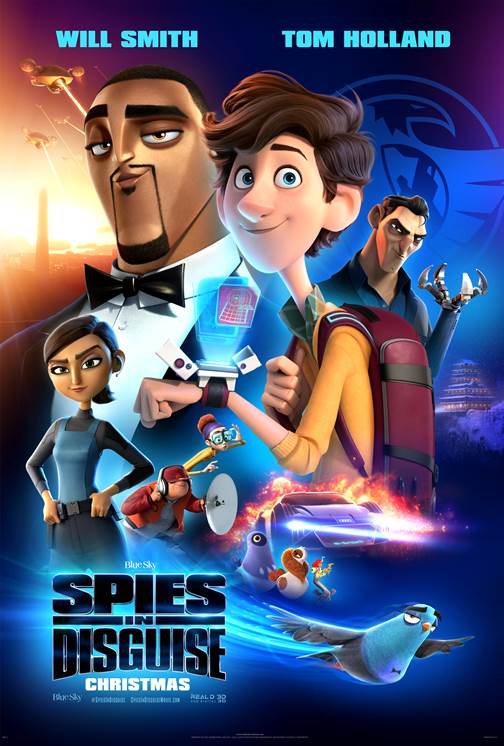 Some of the best family films come out Christmas Day and the new 20th Century Fox animated film Spies In Disguise may be one worth checking out.

The animated spy comedy-adventure set in the slick, high-octane, globe-trotting world of international espionage. Super spy Lance Sterling (Will Smith) and scientist Walter Beckett (Tom Holland) are almost exact opposites. Lance is smooth, suave and debonair. Walter is…not. But when events take an unexpected turn, this unlikely duo is forced to team up for the ultimate mission that will require an almost impossible disguise–transforming Lance into the brave, fierce, majestic…pigeon.

Here are 5 reasons why we may check this film out:

1. A pretty dope cast – featuring Will Smith, DJ Khaled, Tom Holland and Rashida Jones. This film promises to be a fun time with lots of recognizable voices.

2. The animation – the animators behind this film definitely should give themselves a pat on the back. Giving us Incredibles vibes, the animation is crisp and almost life-like at times. Kids, blerds and fans of animated features generally speaking are clearly in for a treat.

3. The soundtrack – with Grammy Award-winning producer Mark Ronson as the Music Director and cast members including Will Smith and DJ Khaled, we have our fingers crossed that we’ll get some fun new music.

4. The fashion – The fashion game of Will Smith’s character, spy Lance Sterling, is totally on point. Tailored suits, cufflinks and clean kicks are his thing. Even though it’s an animated feature, real life guys can take some serious fashion tips from him.

5. The laughs – If the two trailers for the film so far are any indication, Spies In Disguise will be a laugh-filled time for the entire family. And as the doctors say, laughter is the best medicine.

Let’s wait and see what it’s all about. Spies in Disguise releases in theaters nationwide on Christmas Day.