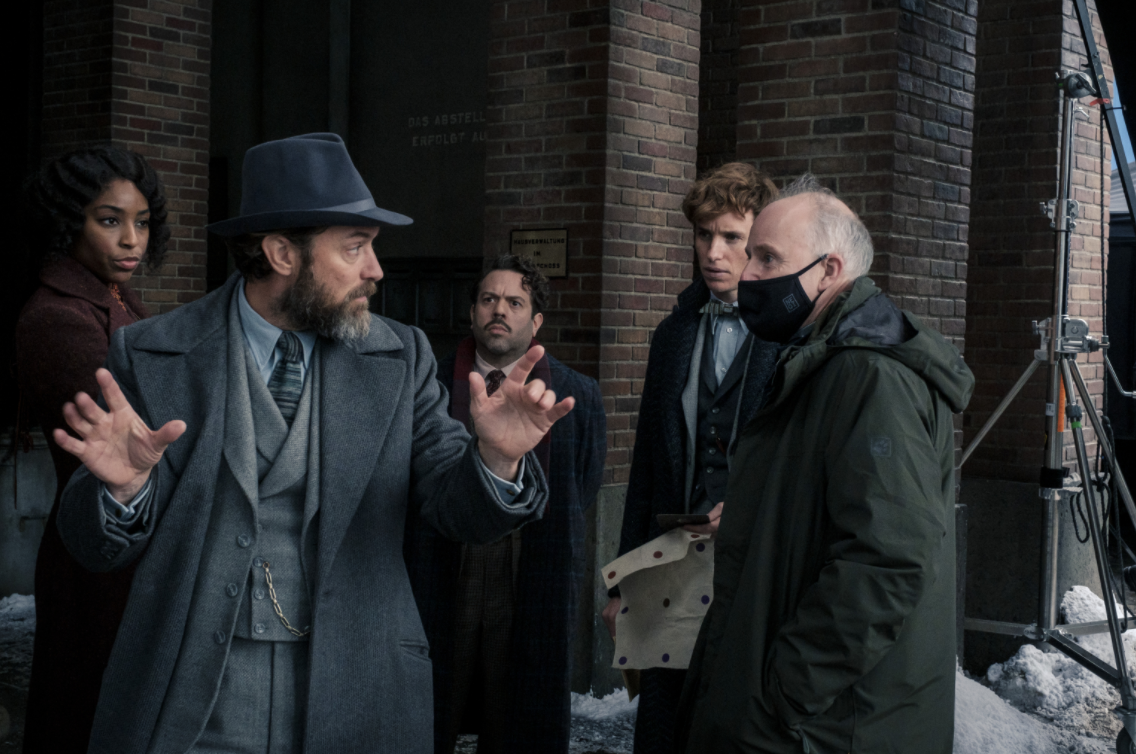 The global press conference for Warner Bros. Pictures’ latest installment of the Fantastic Beasts franchise has arrived. The cast and crew gave us a behind-the-scenes overview of some of the characters and themes in the latest film.

Fantastic Beasts: The Secrets of Dumbledore sees dark wizard Gellert Grindelwald moving to seize control of the wizarding world. Unable to stop him alone, Dumbledore calls on Newt Scamander to lead a team against Grindelwald and his followers. Of course, the wizarding world would not be the same without some magical creatures making appearances and helping our friends along the way.

Jude Law reminds us that his version of Dumbledore is a past version that has to one day become the Albus Dumbledore we love in the Harry Potter films. In Fantastic Beasts: The Secrets of Dumbledore, “he is the man still finding his way, facing the past, facing his guilt,” says Law.

To get Dumbledore right, Law took cues from past examples. “He always sees the potential good,” Law continues. As we learn in the films, Dumbledore is a complex man. Through this film, we get a peek into some of those complexities. What never falters in this film is the good nature of this character. Dumbledore’s relationships with all the characters highlight the professor’s status in the wizarding world.

When it comes to Newt Scamander and Dumbledore, the relationship has evolved over the three films from “master and apprentice to more fraternal,” says Redmayne. There is an older brother-younger brother vibe. It has evolved so much that Newt feels confident enough to give Dumbledore advice this go around. Their relationship is also highlighted by Newt’s unwavering follow-through of the selection of his team in this, as Redmayne describes it, “wizarding heist movie.”

These are people that Dumbledore makes a point to uplift and highlight the good he sees in them, encouraging all to see his plan through. From giving a muggle a wand to providing Yusef a mission, family, and purpose, Dumbledore is easily recognized as the best wizard of all time and the central figure of this Fantastic Beast story.

Ironically, the character that is shaped the most by Dumbledore is the villain of Fantastic Beasts: The Secrets of Dumbledore, Gellert Grindelwald. Mikkelsen, who portrays Grindelwald, joined the cast late. “The journey was fast and swift, but I felt at home all the way,” he states.

It is a journey that highlights the menace and charm of Grindelwald’s character, attributes that Mikkelsen is great at portraying. He pulled from the story, from Director Yates’ head, and most of all, Grindelwald’s relationship with Dumbledore. “He is linked to Dumbledore,” says Mikkelsen, “so his character is shaped out of that world.”

Dumbledore and Grindelwald grew up together and at one point had the same beliefs. There is a point where their differences take a toll and sacrifices are made. Mikkelsen had to figure out his character by asking, “Why is he trying to make the world a better place in this way?”

Director David Yates has worked on seven films, soon to be nine, in the wizarding world. His insight into the characters and the themes found in this world is what the actors use to help bring their characters to life.

He spoke on the power these films have and the themes that make them so inviting to viewers. “These films become a safe place. They celebrate certain values. They are about empowering the outsider, the person you underestimate. It’s a beautiful thing to be part of a movie that provides a safe space for some people.” He told a story about how one of the first previews of the film had a young kid in the audience.

When the film was over, everyone wanted to know what this kid thought. His reaction was, “It was good. It’s really human.” That statement is a pure testament to the stories and the actors in Fantastic Beasts: The Secrets of Dumbledore.

Themes like the family you make, courage to do the right thing, love, sacrifice, the choices you make, and hope, are not only exemplified in the film but personified in one character, Albus Dumbledore. The cast, director, and producers are all excited for audiences to take a deeper dive into the famous character and see how the Dumbledore we have now grows into the Dumbledore we all love.

Fantastic Beasts: The Secrets of Dumbledore arrives in theaters on April 15, 2022.