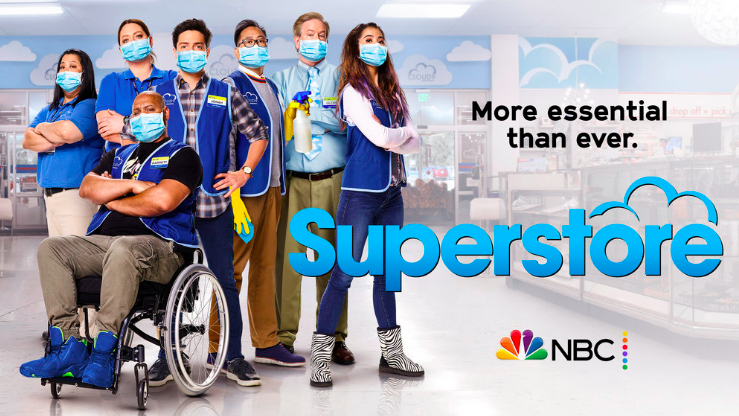 It always feels like the good things end too early. Look no further than the one season of WandaVision or Firefly, the seasonal Girl Scout cookies that end too soon, or even the Surge soda that my sister said once existed. But if you move your clothes around in your closet, you might just find a vestigial remnant of consistency. Your pants still fit (mostly), your favorite sports jersey is still unworn, and Superstore continues to deliver great comedy even till its final episodes.

Saying goodbye to a fantastic show that has given many of us countless hours of entertainment, with a few sprinkled episodes that have really made us think about our current culture, is going to be hard. This overly excited writer got the chance to speak with the stars of Superstore in an online press junket.

So, as a long-time fan, I have to ask. Is there any line of dialogue that still resonates with you or that you will remember?

Lauren Ash (Dina): My favorite has always been during the episode of the all-nighter when I improvised a line. It started when Mateo says to Dina, “Just trust me.” Dina says to Mateo, “It’s just been so hard to trust people since my dad left me in that gas station when I was a kid.” That got into the show, and it became canon. Then in Season 5, we got to meet Dina’s dad. That to me will always be special. It was a dumb joke that I improvised, and it got a story line plot point season later.

Nichole Sakura (Cheyenne): Mine will always be, “Three out, bitch.” I don’t know why, it’s such a dumb insult, but it’s also innocent, but that’s what I love about it.

Mark Mckinney (Glenn): Mine would be when Kerri Kenney [Jarusha] was bobbing for apples, and she comes up with her face streaming saying, “Did we win?” That was just hilarious.

How similar to your characters are you?

Kaliko Kauahi (Sandra): I think Sandra is just so full of extremes. It all depends on the day and situation. That’s in me somewhere. When she is quiet and can’t stand up for herself, I am that way also. I think that many like to pretend that everything is fine, but Sandra does not know how to be cool about anything. If she is happy or sad, you’re going to know it.

Sakura: I think I am more similar to Cheyenne than people would assume. I used to think that she was so unintellectual, but I am not a major intellect either. I do think that we believe we know the world, then it turns out we don’t. She’s a hopeless romantic. I relate to her on so many levels. I love Cheyenne.

Why did you interview for these particular characters?

Nico Santos (Mateo): Yeah. when I interviewed for Mateo, Superstore was my major break. At the time it was interview for anything, try to get that job, try to get that dream. I think what drew me to the character was that he wasn’t written as a queer Filipino guy; he was written as a straight Latino guy. The material just reminded me of every shady queen that I worked with in retail. I was thinking, I know this person. This person will step on you to get that sale, get ahead. I just modeled it after that. My retail experience came in handy, finally. I know it is written as a straight male, but I will do my own interpretation.

Colton Dunn (Garrett): Sure, what drew me to audition for this part was that I was an actor that needed a job. That was the biggest thing that drew me into this. But, overall, what drew me was what I learned about him over the seasons is that on the surface he is a guy who hates his job, and doesn’t want to work with customers, and he remained that guy till the end. We got to learn a little more about his strong interpersonal relationships with his friends, and there were times he stood up for his friends or tried to motivate his friends. Even though he put on these airs of being a standoffish guy who didn’t want to be there, he was a real loyal and loving friend.

What was the most challenging aspect of playing this character?

Santos: For me it was just drawing the line between making Mateo a character and a “stereotypical” gay—I don’t want to say stereotypical because it has so much stigma. Yes, I mean, you look at Mateo, and he is this kind of bitchy, sassy gay guy. People will say, that’s a stereotype, but not really, because people like this exist. I modeled this after real people who I know. That’s why I love that people were introduced to the fact that he was undocumented because it just rounded out his story. We got to realize why he is the way he is. I think it was that, trying to toe that line.

Dunn: I think for me the most challenging part was showing up, arriving every day, and putting on the costume, walking onto set and standing next to Ben Feldman. I never have to do it again. [Laughs.]

Santos: [Gay sarcastic voice] Your life is so hard.

To the writers: Your writing looks so natural. I want our audience to know what they can do to write better comedy. So, what is your process, or how does writing work for you?

Gabe Miller: The multiple steps that are built into the process help. It keeps getting refined. It starts as this rough thing that people see promise in, and then we have all these smart funny people who each refine what is there. What we try to do also is planning ahead. It’s not sexy or cool, but outlining helps so much. You can set things up, and it will pay off. When you do that, it feels effortless or like magic. The reader will see it as satisfying. Outlining and planning ahead really helps.

Jonathan Green: A lot of it is rewriting and refining it. A lot of it doesn’t come out funny or perfect. A lot of what we do is rewriting and pitching ideas. As a staff we go through the script and ask what jokes can be improved. We have a whole room of writers working on those jokes. Each one trying to beat what is already there.

Rotten Tomatoes critics agree, this was a really good show. In the meantime, we can enjoy the last few episodes of the series together. We can give them a super goodbye, but if viewers like me have our way, we can expect to see more of Cheyenne and Mateo in the future with other projects. The final episodes of Superstore are available to stream on Hulu.