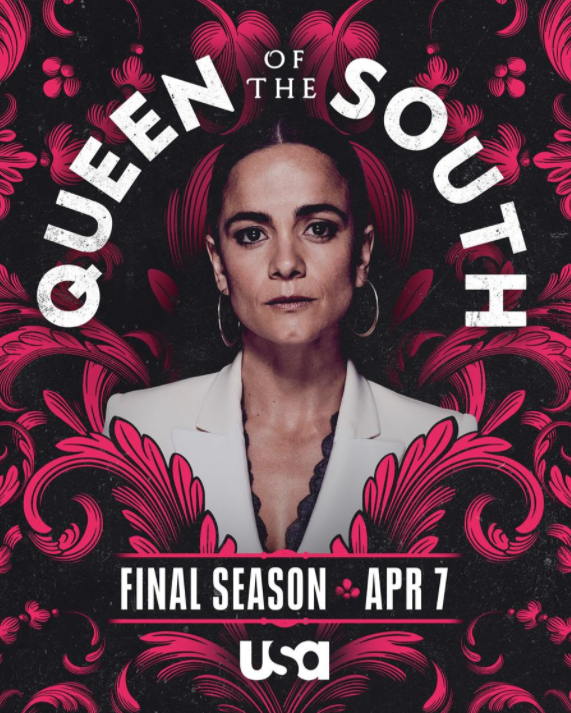 Queen of the South’s pilot episode begins with a radiant woman in a white suit and huge black sunglasses walking from a helicopter in slow motion with a group of security guards dressed in black suits walking in V formation behind her. She ascends a square staircase encapsulated in glass, to her boudoir. She slips out of the suit and into a satin robe, opens the lid of a beautifully carved ceramic box filled with cocaine, dips a tiny spoon into the drug, lifts the spoon to her nostril, and inhales deeply. The rush brings a slight smile to her lips, all in slow motion with a voice over. She turns and BAM gunshot. A bullet pierces the window and slams into her chest knocking her to her back on the floor. A single stream of blood traces its way down the crease of her smile. From that moment, this Black Girl Nerd was hooked.

Alice Braga is Teresa Mendoza in this action-packed 21st-century rags-to-riches story of a woman on the run from Mexico who fights her way to the pinnacle of power at the top of her own drug cartel. BGN asked Alice Braga a few questions at the NBCU Entertainment Scripted Mid-Season Press Junket about the final chapter of Teresa’s story.

I’ve been a fan of the show since the beginning. Lord, that episode with those freaky little girls with the masks in the jungle who were following you around saying in monotone, “What are you doing, Teresa?” I was like, “Girl… RUN!!!”

[Laughs.] Thank you so much.

I’m so rooting for Teresa, all of the time, and I’m totally bummed that this is the last season. Will Teresa be able to keep her humanity as she rises to the top? Because now she’s a boss, in her white suits. But will she still have the values of that girl from Mexico who started so long ago in love?

I think that’s exactly what Season 5 guides her through. I love that you’re asking that question because it’s really, I think, where she is in her life at this moment. She loses her godson in Season 4 and that changes a lot for her because she’s driving the business. There is a mix of ambition, but at the same time a search for safety. The bigger that you are, the less people can affect you or can get to you because you have more power. There is that division inside her heart. Is it possible to keep on trying to do something, in this drug business world that is so wrong? Like, how can Teresa keep on going? Season 5 is going to be a lot about wanting revenge, about pain, and about understanding how much she cannot be pure, if she’s part of this business. She’s an anti-hero because she’s part of this growth, but at the same time, she’s a heroine of her own life and her own journey. She’s a survivor. She’s a girl that came from a harsh childhood in Mexico in Culiacán, who suddenly receives a phone call and is on the run for her life. She’s just trying to survive. Season 5 is the season that Teresa’s concluding that journey. Throughout the entire season, she’s facing those challenges and trying to understand. I’m really curious to see what the audience is gonna think about what happens at the end. I cannot wait for people to see it because it’s very connected to your question.

We saw Teresa’s end in the first moment of the pilot. So, is this really the end? And if so, do you think Queen of the South has achieved a satisfying conclusion for the audience?

It’s so interesting. I have never done TV before. Queen of the South was my first television experience. It was a dream that lasted five seasons. It’s such an honor to be able to play this character and to work with the studio with the network and to be, you know, a leader of a show for such a long time. That connection with the fans, is something I’ve never experienced in my life before because I’ve only done films and it’s a completely different experience. Having the relationship with the fans becomes part of your work because they’re so engaged in the journeys. They’re so engaged in storylines. I really hope they enjoy it. It’s a challenge because it is a journey. She goes from this girl on point A and becomes a completely different human being by point B. We see that beginning, and in these five seasons we show how Teresa got there. It’s very exciting. I cannot wait to see the reaction of the fans. We always hope that everybody likes it. We never know if everybody’s gonna like it. But I think it’s gonna be very interesting, very powerful.

You’ve got a fan over at Black Girl Nerds. Thank you so much for the fantastic work.

Thank you very much. I appreciate you saying that.