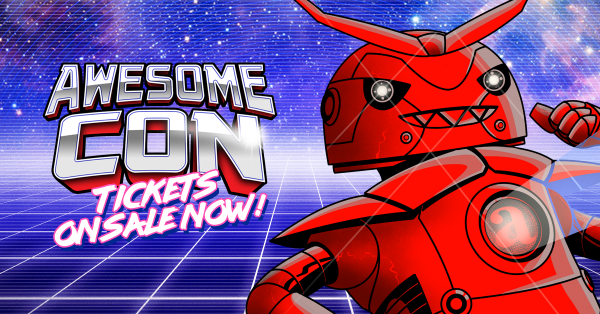 Here we are about 6 months into the 2017 convention season and we here at Black Girl Nerds had a great phone interview with Ben Penrod, founder of Awesome Con. Awesome Con has been around since 2013 and starts this year on Friday, June 16th and lasts through Sunday, June 18th. Like years past, Awesome Con is growing and seems to introduce something new every year.  There is the “Backlot,” which contains themed props and backdrops for some really cool t-shirt or actual cosplay fun. Last year there was also the “Science Fair,” which was supported by the Science Channel and included a main hall discussion with Bill Nye the Science Guy.

Ben noted Awesome Con’s commitment to diversity, and that can be seen in some additions to the con.  This year, a week after Washington D.C.’s Pride events, Awesome Con is presenting Pride Alley and another themed track known as Future Con. Ben was a great sport and after a quick quiz to test his nerd credentials, it was determined that he is a true fantasy lover of the Real Genius, Dr. Who, House Targaryen flavor. We then moved on to what is new at Awesome Con this year.

BGN:  So talk to us about Pride Alley, we’re really excited to see that.

Ben:  Yes, so we’ve been, we’ve had Geeks Out, which is a, which is a LGBTQ nonprofit, we’ve had them involved in Awesome Con for the past few years, and… last year…I think… it was their third one, but I didn’t realize that have been doing … their own convention in New York City called Flame Con, which is you know like a small LGBTQ convention. I just remember I was on Twitter, and I kept seeing everybody talking about Flame Con, and I felt like I was the only one who wasn’t there. It was the most amazing thing and I was upset that I didn’t even realize that it was happening…so I would have gone and [then] one of my co-workers Peter, he went to Flame Con and he, and I reached out to him [and asked] “Have you heard about Flame Con?” and he was like yeah, I was there. We knew this was a very special thing that had happened and we wanted to wanted to be a part of it and to support it at Awesome Con, so we got in touch with Geeks Out, who we had worked with in the past, who had put on Flame Con.  And we said, hey, can we do…[a] sort of a LGBTQ track, where a section of the con at Awesome Con and you know and use your Flame Con contacts to kind of… make this happen.  They were happy to do that and we put it together, and it was… really cool. I think it’s gonna be very fantastic. I wish we had announced it earlier, [because] I don’t think the…Pride Alley part of Artist Alley is going to be quite as big as we wanted it to be, because I, we just didn’t announce it earlier enough for people to get on board, but it’s okay we can always start small and grow it up big for later.

BGN: So what will be expecting so see on the alley, is this specific groups or related to the LGBTQ community?

Ben: So it’s like a, like a part of the Artists Alley that is going to be you know LGBTQ, creators or people who are in that in that space in some way, and it’s like the same type of creators that would have been at Flame Con. We also have a programming track, that is actually very robust that will be like a Pride Alley programming track. I believe there is one room that will just be Pride Alley programming…[while] I’m not 100 percent sure, but I know we have a whole track that’s like three whole days of Pride Alley.

BGN: Excellent, excellent…That’s really cool…we also see that you’ve teamed up with the Smithsonian and the Sci[ence] Channel…[for] Future Con, so what can we expect to see for Future Con?

Ben: Future Con is something we have been working on for a long time…and so last year we introduced the Awesome Con science fair, which was kind of a singular-type version of Future Con and it went very well, and then we teamed up with the Smithsonian to put together Future Con, which is a science, technology, engineering, and math (STEM) area of the convention floor, so you’re gonna see, instead of seeing exhibitors who are selling comic books, or t-shirts, or video games or any of that cool stuff, instead it’s going to be like NASA and…Science Channel, and Smithsonian and…I don’t even know the, we have so many of ‘em, and it’s going to be mind-blowing, kind of where science fiction meets science fact. We have a programming track for Future Con also has headlined by Star Talk, which we had last year, and this year we’re going to have Commander Chris Hadfield hosting Star Talk, and if you’re not familiar with him, he is the Canadian Astronaut who is very famous for playing his guitar in outer space. He did a cover of Space Oddity by David Bowie in space (https://youtu.be/KaOC9danxNo). He is amazing and you know I nerd a lot about TV stars and professional wrestlers, but this guy [is] like the world’s most famous astronaut and…he’s going to be at our con and that’s so amazing. He’s been to outer space, he’s done an awesome cover of a David Bowie in space, and David Bowie liked it, and he’s going to be at our con. Like how cool is that?

So with a couple of days to set up, Ben, his loyal staff, and 400 volunteers, affectionately known as the “Brute Squad,” are getting ready for Awesome Con.  Get your Dad, and come join Ben, me and Jamie, our Blerd Queen, all weekend as we con around the Walter E. Washington Convention Center in Washington, DC.  Also, be sure to take a stride down the various con alleys and stop in Friday to the “Queer representation in media” panel with BGN’s own Valerie Complex.  See you there!!!!! 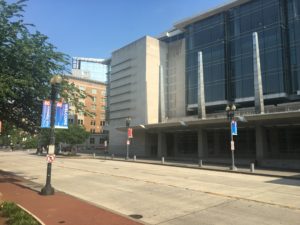