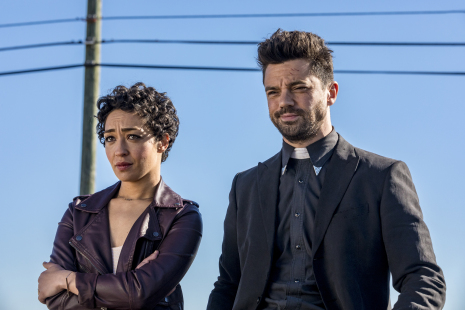 While American Gods set up its alter in Austin Texas premiering their multi-mythology, supernatural drama at SXSW, another myth-rich prestige show revealed its return date with some enticing stills. AMC’s Preacher returns to TV on  Monday, June 19th at 9pm ET/PT with an all new 13 episode season–an increase from the first season’s 10 episode order.

Fresh from her Oscar® nomination, Ruth Negga, who plays Tulip, will be reunited with her real-life paramour, Dominic Cooper in the titular role and wicked scene thief, Joe Gilgun as Cassidy, the debauched vampire. Those of us who were fans of the mid 90s graphic novel from whence the AMC hit came, should start to feel a bit more familiar with the material, as season 2 begins the epic road trip that the three main characters embark on in the opening pages of the novels.

As with every adaptation, some liberties were taken with the source material and since the story of Odin Quincannon was told to completion in S1, we will not be meeting him in the town of Salvation. It’s possible that this chapter of Jesse’s journey will be excised from the show altogether.

There’s a whole new world out there for Jesse, Tulip, and Cassidy to explore. I for one will be excited to continue the journey starting on June 19th.