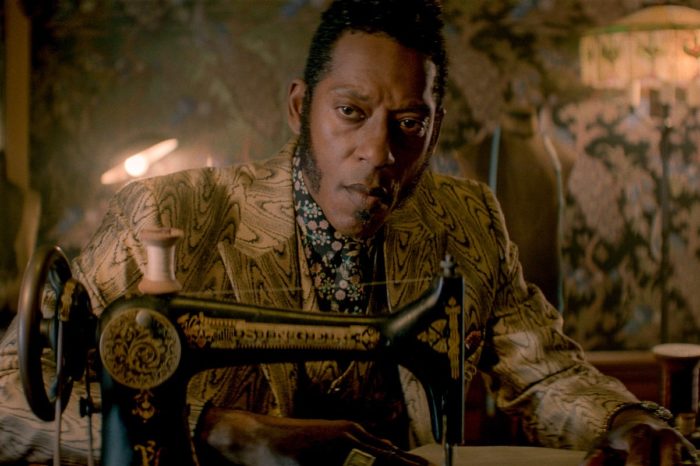 Everything American seems to be under attack in this week’s American Gods, from the immigration policies to our gun laws, and general ideas on the defense of the nation. If you watched this week’s episode and ended up pissed at the showrunners for reasons you can’t quite articulate, then maybe, just maybe, this episode WAS talking about your America.

Most of us, however, were moved to tears, panic attacks, and downright fear from the beginning of the episode through the stay in Vulcan. Salim’s peaceful, prayerful sunset call to Allah was necessary to bring us down from the emotional roller coaster. I do love that Salim.

Let’s dive in, shall we? Mr. Wednesday has dropped some serious knowledge in the form of quotes throughout the season thus far. Just look at his explanation of Brown Jesus and the topic of belief in episode 3. None of his quotes were more real, more telling of our culture than his description of the Vulcan townspeople. He says:

“Everyone in this particular town is a dedicated citizen. Dedicated to one belief, their America. There aren’t just two Americas. Everyone looks at Lady Liberty and sees a different face. Even if it crumbles under questioning. People will defend the warm, safe feeling their America gives them. They will defend it with bullets…”

The talk segues into answering Shadow’s initial question about why the streets were empty. His explanation stuck with me, creating more questions each time I turned the words over. As I did, several correlations to the events of the past few weeks surfaced, making Wednesday’s speech this week near prophetic, as this episode was filmed last year.

Wednesday begins with the idea that the default is not one America, but two. Before you start wondering too hard about what two Americas, just stop. He is talking about race. That is evident in the lily-white makeup of the townsfolk. The town of Vulcan is one America and I guess the place where the help or POCs go is the second America. Don’t let the two touch, now. Wouldn’t want anything to smudge Vulcan’s America. “Mainstreet America”.

Remember the election, when everyone was supposedly fighting for “Mainstreet America”? They were fighting for Vulcan. The quaint small businesses owned along this idyllic thoroughfare that allegedly fueled the economics of the town (despite the factory pumping out tax money and jobs in the background). The street ends at the shrine to the Vulcan munitions plant. It is a clean town, orderly, and full of white people.

You may see a token POC, but they were hand-picked, vetted, and bestowed the position. Don’t let them fool you. Not just any Black man can waltz in on “Mainstreet America” without permission. Shadow finds that out when Vulcan offers drinks—but none for Shadow—and then wants to joke about a “decorative” Hanging Tree. Lynching ain’t a lawn decoration!

Wednesday goes on to talk about how these White people are the dedicated citizens. They all have an idea of America and a face of Liberty that they worship. The line that kills me is the one that talks about how these people follow and believe in this idea “even if it crumbles under questioning”! Do you know what that means? The people who were the focus of our damn entire election (don’t believe that, Google “Mainstreet”; every damn candidate made at least one speech pandering to that shit), the people who think they are superior to that “other” America, will follow their idealized delusions and worship them EVEN IF IT NO LONGER MAKES ANY DAMN SENSE.

Let that sink in while you think back to all the heinous shit 45 has pulled since inauguration. Think about all he has said. Think of how illegal most of his actions are. Now look back at the words in bold. Sit with that for a minute. If that don’t scare the hell out of you, then you just don’t get it.

Wednesday goes on to explain why they hold on so hard. They are grasping onto comfort, to the world they know, even as the rest of the world is rendering that world obsolete. Their ideas are outdated (coal as clean energy; come on now) and wrong, but they don’t care. Those ideas are comfortable and safe. Taking those ideas away is worse than weaning a toddler from his binky. They scream, throw their little bodies around, and are genuinely depressed for a few days. Unlike those toddlers though, “Mainstreet” got guns. They will cleave to the comfort of their America and “defend it with bullets.” 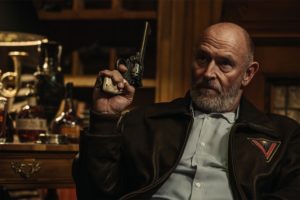 As they did it in Kansas City in February.

As they did it in Portland a few weeks ago in May.

And there are more…a growing list of more than 1,000 incidents have been compiled since 45 was elected. The list (found here: https://www.splcenter.org/hatewatch/2016/12/16/update-1094-bias-related-incidents-month-following-election) is curated by the Southern Poverty Law Center. Read it and see just how hard “Mainstreet” has been trying to defend its idea of America right here under your nose. The targets aren’t just Muslim. The number one targets are labeled immigrants. (We all know that means Latinx and Muslim. Stop playing.)

Their world is changing and their leader says it’s okay to fight it. You know what “Make America Great Again” means, right? It means Make America Like Vulcan. Look at all the flags, the patriotism, the saluting, the guns. Listen to the trumpets and flutes laying down a melody for the well-masked hatred marching in the street. I’m telling you all, that’s the America they are trying to get to. Probably the reason the news isn’t tracking all these hate crimes. 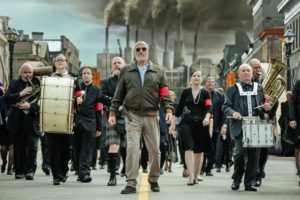 American Gods is Watching and Judging

We witnessed a hate crime at the very beginning of the episode when Americans, clutching their crosses and firing their precious Vulcan bullets plowed into a crowd of Latinx people without even asking what the hell those people were doing.

Notice how their idea of America is so strong and clouds their eyes so fully that they can’t even recognize Jesus when they see him? Can’t see him as they pierce his flesh with bullets.

Jesus is killed and left lying on the desert sand as if it were a wooden cross. Christians can stop blaming the Jews, cause Y’all did this one. Seeing this scene after watching the people nearly die coming here made me so full of anger and fear and sadness that I cried. I cried the second time, after seeing Vulcan and their America described as well. One scene begat another in a biblical tale you will never read in church. 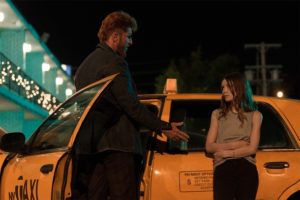 I realize that art is supposed to imitate life, but this shit is getting too damn close, American Gods. I am so glad that you added comic relief via the sexually sage wordsmithing of Mad Sweeney and his traveling partners—Laura and Salim. I needed them to lighten the mood.

And that prayerful ending with Salim will piss off a ton of bigots, but I got to tell you American Gods, after seeing my world reflected in the hateful Vulcan this week, and poor Brown Jesus, my soul needed to be with Salim on the roadside at his sunset prayer.

I still can’t wait to see what you plan to do to us next week.