A lot happened in this week’s episode. Let’s skip the introductions and just dive in, shall we?

A Story from Ibis

We open with an Ibis special, a “Coming to America” sequence. This time, the history goes back further than it ever did to a time when the first people crossed over the land bridge. In CGI/Stopmotion or something (I just know it wasn’t live action), the show tells this ancient story. The leader, a woman Atsula, loses her child along the passage due to the lack of food, weather, and other hardships of the journey. They still have their god though.

We see a prayer that is magical but ends up foretelling the death of the clan. Sure enough, the moment they see people for the first time on the journey, the leader is murdered and so is the second in command when he refuses the natives’ hospitality. The message is clear: “Join us, become one of us, and you will live.”

The people abandon their god and their culture for survival. Both soon die a cold death after thousands of years of neglect.

From on decaying thing to another, the camera shifts to Laura Moon, rotting and waiting among the flies for Shadow to return to his hotel room. I don’t know what she expected his first reaction to be, but it definitely wasn’t the pillow to the face that Shadow gave her. “Just to see if you are real,” was his reasoning. He looked a little madder than that, but okay Shadow. 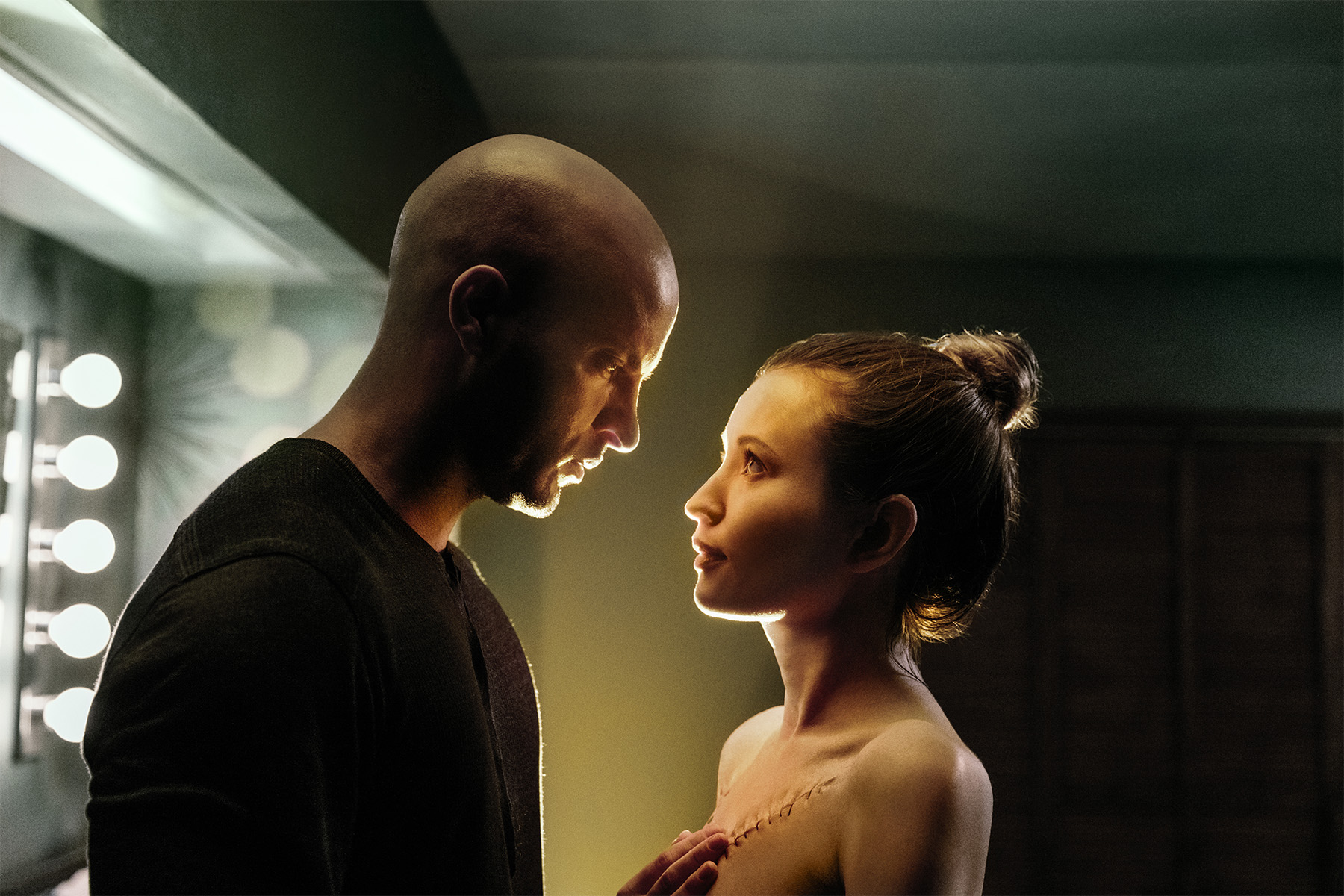 Witty salutations over, the couple jump straight into the fire—the affair with Dane Cook, I mean Robbie, and the fact that she lied about waiting. Laura, instead of giving a straight answer, talks about the “miracle” of her rise from the dead AND THEN commences to nitpicking about what type of lie she told if she even told one! The girl ain’t shame at all.

Wonder what all the animosity is about over Laura Moon is about? Read last week’s review Why “We Still Hate Laura Moon.”

Upon his return to the room, Shadow finds Laura naked as the day she was born in the tub, talking about warming up for him. She makes it clear that she wants to reconcile, despite being dead. Fortunately, Shadow cannot get over the dead part. After a few attempts and even a kiss that turns weird, Laura asks, “Are you still my Puppy?”

Shadow answer with a straight face, “No!”

Maybe this is the end of such a tortured relationship. However, this show never seems to let things go for good where Shadow is concerned.

Wednesday knocks on the door, breaking the tension and drawing Shadow outside. Earlier the old god had a rather tense conversation with a crow (yep, a bird). Now, he is trying hard to get the younger man to go to a bar—to get away from the hotel. But, Shadow is stalling. He has the Laura problem; doesn’t want to go anywhere. Shadow does not get the hint until police roll up, and they are carted away. 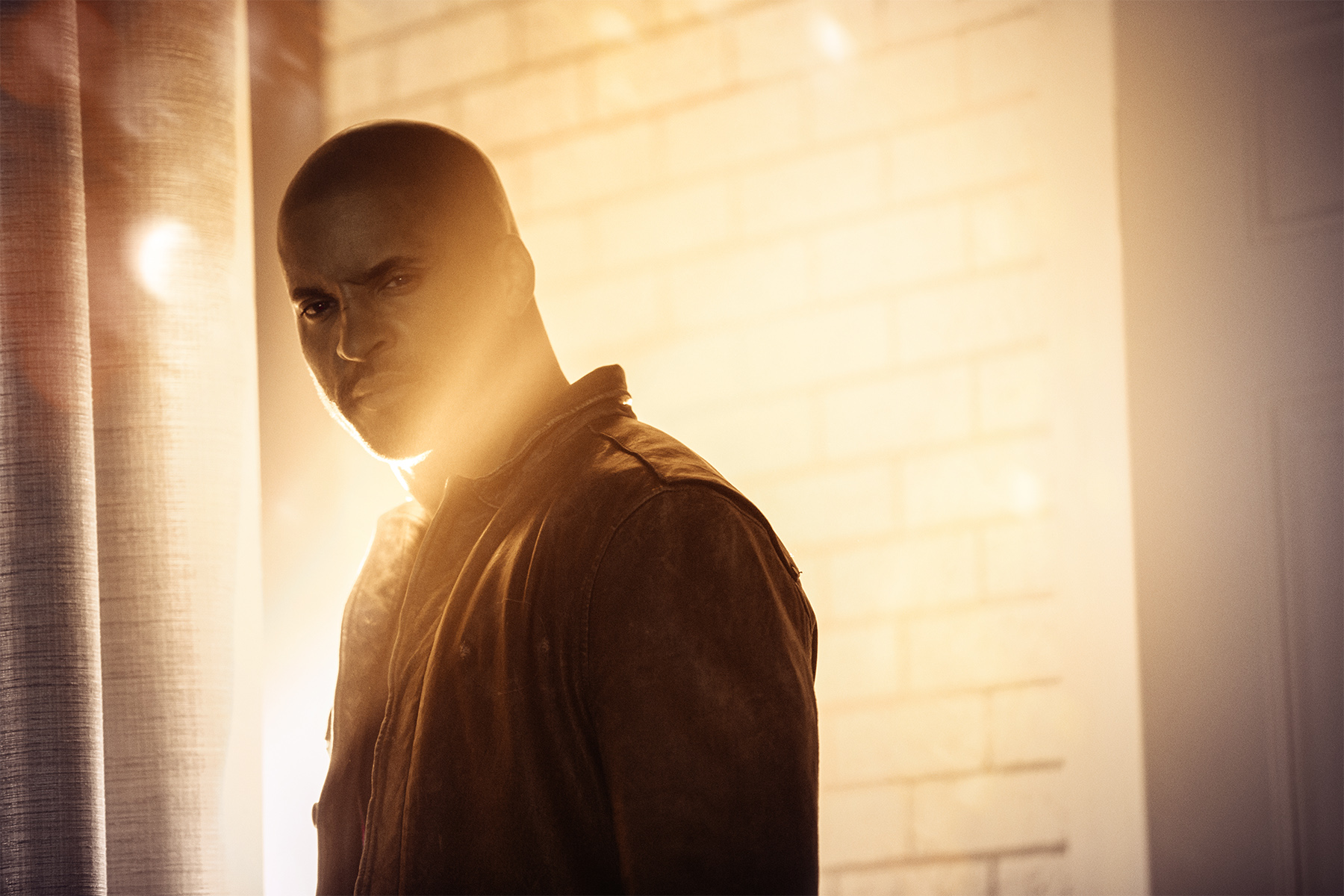 Reckoning with a Starman

The next scene shows a kid coming out of a very loud and wild-looking party. The kid looks like Technology Boy. He sees a robot on the street and knows what’s going down next. He’s snatched up and sent into the waiting limo. In a reversal of roles, Media is in the limo with Tech Boy in the hot seat.

Gillian Anderson is an amazing incarnation of Ziggy Stardust, the alternate ego of the late great David Bowie. She tries to tell the younger god that he really messed up by lynching Shadow. Race issues aside, the lynching created a case for Wednesday where there was none. Now he had the attention of the old gods (who tech boy calls “Monsters,” “Pokemon”). The boy acts like he does not care! Media tries to talk some sense into him, tells him that Mr.World wants an apology—to Shadow and Wednesday. He has no choice. 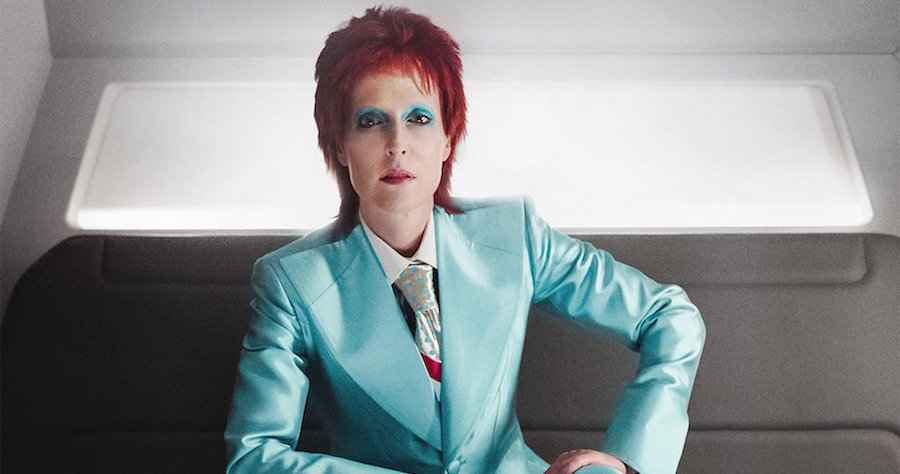 Back at the station, Shadow is in one room with the great character actress Tracie Thoms playing the interrogating agent. He keeps answering “Lawyer,” to everything she throws at him. Cut to Wednesday who is singing like a bird, telling all of their business. There is mention of a retirement home as the agent interrogating the old man implies that Shadow broke him out of the facility.

You all thought he was right for a second, didn’t you? And, Wednesday kept talking about gods and quoting William Henley on death. He did seem somewhat senile. The agents soon reveal their hand, a fax came in about where they would be and then came other information. We know the new gods are at work. We know this is a setup, and when Wednesday is put into a room with Shadow, we see that the old man is just as scared as Shadow is, if not more. 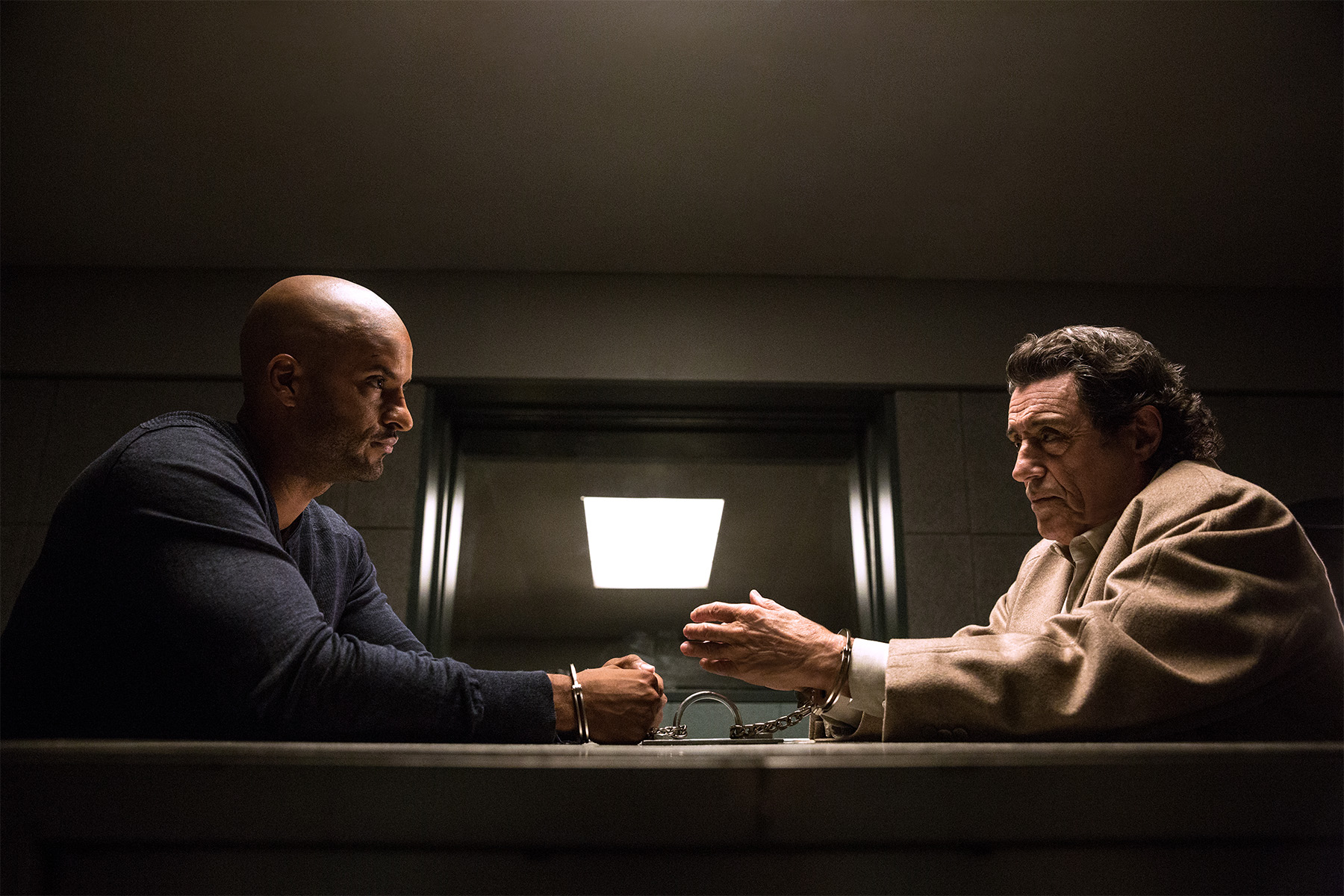 Anansi shows up in spider form to open the cuffs, but once again, Shadow does not take the damn hint to move his ass when the old god tells him to. Shadow demands to know who is scaring Wednesday. His stalling ends up running down the clock, AGAIN. Next thing you know, there are gunshots and shouts. Then Media, this time as the iconic Marilyn Monroe comes floating into the room. She gives her little spiel and then the man who scares Wednesday comes gliding in with an evil smile and creepy-ass voice.

Crispin Glover plays an amazing Mr. World, whose eerie demeanor sends out chills through the screen as he explains who he is to Shadow. Media signals that they are short on time. They then call in the boy.

Tech boy walks in like he is a bratty kid who was caught shoplifting and now his parents, Mr. World and Media, have forced him to come back and apologize. His apology is problematic and ingenuine.  “Mama and Daddy” try to help out. They offer Wednesday an upgrade that he would perform with the help of Tech Boy. Media launches into a glorious explanation of the “prize” as if they were on a game show and he, the old god, was playing for the Showcase. Her bright and excited voice describing the mass murder of millions as if it were a trip to Cancun is disturbing. 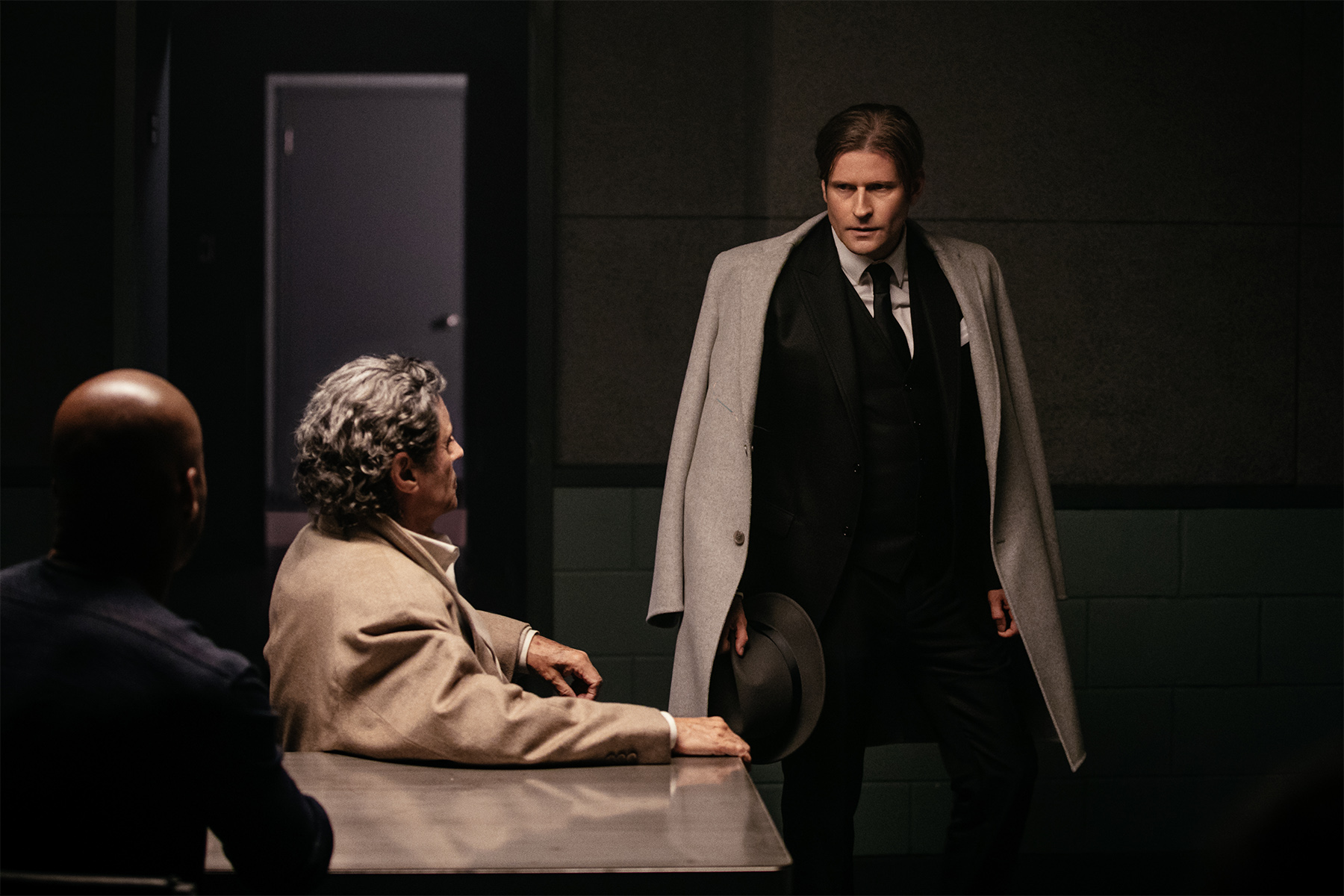 Wednesday stops it with a slap on the table. Explains that he is not interested. Mr. World wants him to reconsider. They commence to leave. Jr, however, is mad. He wants to take the two men now. Daddy lectures him on respecting his elders, which leads to another outburst. Mama shuts it down with a simply blown kiss that somehow knocks the teeth out of the boy. That will teach him to talk back to his elders.

Assholes of a Feather… Flock Together or Fight

Meanwhile, Laura meets Mad Sweeney who wants his coin. Super strong Laura practically breaks fingers and threatens to kick a hole in the man from balls to skull. He tries to force, threats, bribery, and then simply asking for the coin. Laura turns down every one of them. She knows what a gift Shadow gave her, and she is not about to give it away. The scene with these two is so great because it is like asshole meets asshole as they vie for the title of “The Worst”.  Laura wins. She plays dead when the cops rush in. Oh, and Mad Sweeney is holding her under water at the time. He gets taken off to jail. You guessed it: murder charges. Laura’s dead ass grins under the water.

Back at the station, Shadow and Wednesday barely a phenomenon that leaves every agent and cop in the building dead (including our Tracie) and a tree growing out of the floor and filling the halls. The two men escape out the back. The squad car with Sweeney in it pulls up. You already know those cops become casualties. Sweeney doesn’t wait around. He bashes his way through the car window and runs down the road. 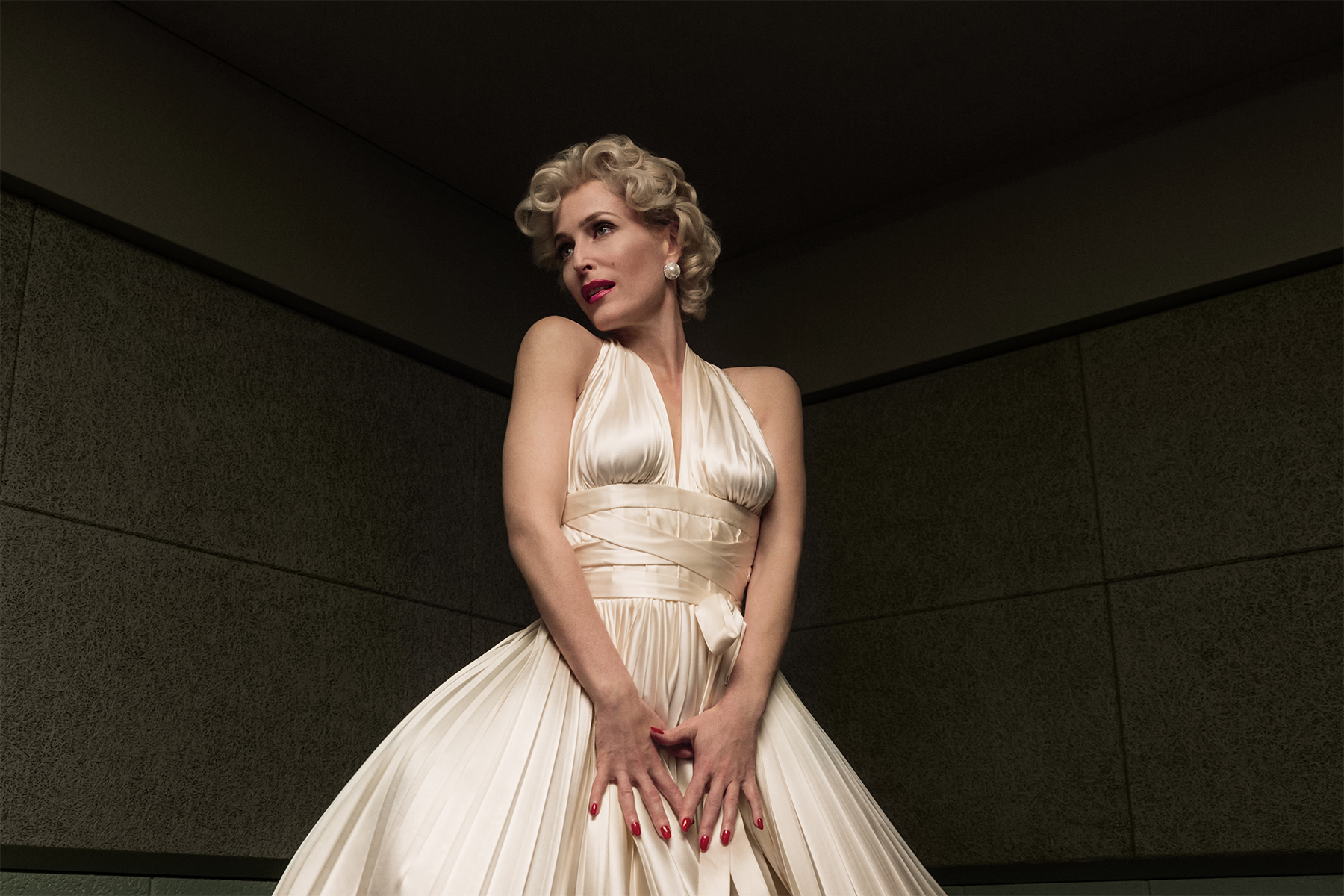 Laura meanwhile is in the morgue. She beats her way out of the freezer, killing the morgue attendant when she sends the door flying open. She seems bothered by her dead status, but quickly finds clothes and moves on too.

All of our main players leave the episode on the move.

Hats off to Mr. World, but I must give it to Media this week. She can go glam or chic, but still, has the power to keep the younger gods in order. That kiss to tech boy was epic.

“My luck coin Ginger Minge.” Laura to Sweeney as they fight over the coin.

“I’m not your enemy,” Mr. World’s last words with that evil ass smile.

“I’m sorry. For lynching you. And a dark-skinned man. Ugh. Was in very poor taste. We are in a weird tense place racially in America. I don’t want to add to that climate of hatred.”

This episode reminds us that there are bigger things at stake than Dead Wife Laura and Shadow. It’s all about the old gods versus the new. How do we move forward while honoring our past? Definitely not by repeating some of the same mistakes (as Tech Boy found out when he was made to apologize for the lynching). Each character this week is racing on to something new and unknown, but they are all still holding onto some part of their past. You can feel the tension brewing.

The storm is definitely coming.