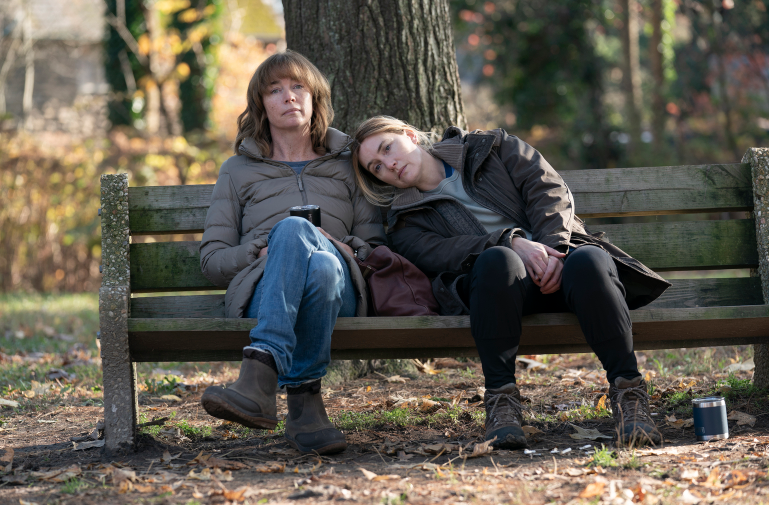 HBO’s limited series Mare of Easttown features a 40-something female detective, Mare (Kate Winslet) with a level of realism that’s refreshing for American television. The series feels a little bit like a middle American version of the crime fiction Nordic Noir, like Deadwind, from Finland, or Denmark’s Bordertown. With a high school girls basketball team’s state championship win from 20 years ago as the backstory, this murder mystery provides a compelling take on middle America. BGN spoke with showrunner Brad Ingelsby via Zoom about his first TV project.

What inspired you to tell this story right now?

When we first started writing it in 2018, I was feeling like we were in a dark time in this country. I wanted to portray the need for compassion and mercy and to help each other with a certain level of kindness and decency. I think we’ve turned a corner in the country. I hope we’re in a different place. There’s a certain level of optimism now which was what I wanted to achieve with this story — those traits of kindness and decency and just taking care of each other and a sense of duty towards the members of a community and towards family.

What were the biggest challenges and rewards of bringing this project to life?

Never having written a TV show before, never having spaced out a story over a longer stretch of time, was challenging. I wasn’t used to that type of  writing. I’d only done movies, where there’s a certain structure that we adhere to and a time limit of roughly two hours. Having to space out a story over seven hours, having to know when to plant things, and then, obviously, since this is a genre where people expect every episode to end with a cliffhanger… it’s like, oh my goodness! I never have cliffhangers in a movie. It just ends. There’s a resolution, you know? So, that was a bit tricky. Also I think trying to understand the genre expectations while also trying to create a story that is about a family in grief was the tightrope walk that I enjoyed, but also found hard at times. The audience wants another clue, a certain twist to happen. But I would say the greatest reward was you get to spend a lot of time with other characters that in a movie you’d never have time to spend with. There’s so many characters I love in the show that in a movie I’d never get to spend any time with them because the focus would be Mare.

I’ve seen five episodes. It kept me on the edge of my seat, and at the same time, I really have to ask, why do you think that crime dramas written by white guys like you, about the abductions and killings of young white women are continuously  greenlit?

You know, it’s a good question. You’ve seen a certain number of episodes and certainly in those episodes we’re are very aware of trying to lean into that trope. But I hope when you get to the end of the show, you’ll feel differently, that it wasn’t a “trope show” about the “dead white girl.” I hope that you take more away from it. I hope that we subverted that expectation, but only time will tell that. I don’t know. There’s always going to be a desire from an audience to wanna play the guessing game every week and say, “Who done it?” I guess, it’s probably a genre that will always have entertainment value whether it’s written by me, a white man, or anybody. I think that genre will always play if it’s done well.

I hear that. Many of the characters in Mare of Easttown are facing mental health challenges and drug addiction in heartbreaking ways. What impression would you like to leave with the audience after experiencing this limited series in terms of  dealing with the opioid crisis?

Just to handle mental illness with a level of empathy. It exists, it’s ravaged communities, and it’s ravaged families. To handle it with a certain level of awareness just for how difficult it is. Mental illness as well as the opioid crisis requires empathy. That’s what I hope will resonate. We handle these characters with a certain level of respect, we understand that it’s an illness, and we understand that it affects not just them but other members of the community and their family. We have to approach these issues with a certain level of empathy. I think that is really all I can hope for. And, that you’re aware of the people in your community and family that are dealing with it and how hard it is to deal with and what they’re going through every day. There’s a certain level of heroism in being able to deal with that while maintaining a level of kindness and decency about it. That’s not easy. If our story can do that, it’s a success.

I want to thank you too because there are enough Black characters in this series that the Black male character that could have been problematic was humanized by showing how his family and community cared for him beyond his addiction. So you won me over. I can see why you got greenlit.

[Laughs.] I want to say one thing. We had the Trammel character, you know the young cop character [played by a Black actor] Justin [Justin Hurtt-Dunkley] who I love, as a person, and we had more scenes with him that we liked, and I’m just bummed that we couldn’t include them. He was really good.

He was great. Often, the only times middle America is coexisting interracially is when we’re playing sports. How did basketball play into reflecting ethnic diversity in the world you created?

In terms of the basketball element, I grew up with a sports background. It’s interesting to have a character who had a glory in her life as a kid that people recognized. It brought a moment of pride into this town that doesn’t have many moments of pride, but it’s now on the tail end of that. People are starting to turn on her. In terms of the inclusivity, I think what I wanted to create in the town was that it was just a town that had African Americans, had a girl with Down’s syndrome, had someone dealing with mental illness, but it wasn’t drawing a lot of attention to it. It was like these people were just other characters in the show as opposed to everyone having to talk about it. And obviously modeling the town on the demographics of where it actually is in the world and trying to be honest that this is what the town actually looks like. It’s really based on a couple of towns where I grew up. We took some liberties there, but I wanted it to be as honest as it could be and I hope it comes through.

The seven-part limited series Mare of Easttown stars Academy Award, Emmy, and Golden Globe-winner Kate Winslet (HBO’s Mildred Pierce), from creator and writer Brad Ingelsby (The Way Back), with all episodes directed by Craig Zobel (HBO’s The Leftovers), premieres Sunday, April 18 (10:00–11:00 ET/PT) on HBO and will be available to stream on HBO Max.