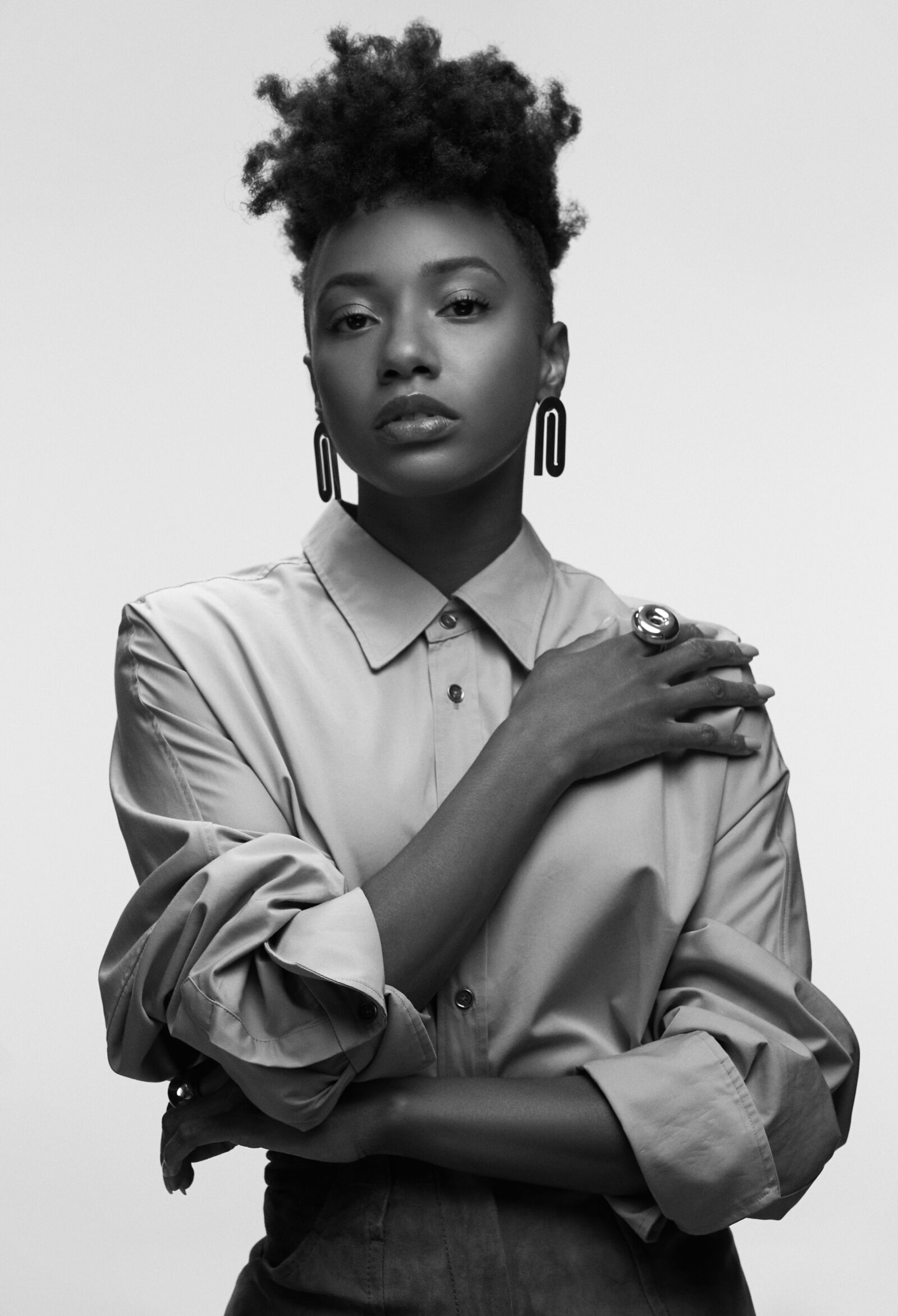 BGN had the lovely opportunity to speak to Alyah Chanelle Scott, who plays Whitney, one of the four leads in The Sex Lives of College Girls.

How did you prep for this role?

I think that the prep is similar to any other job. You make a backstory, you get an idea of who your character is and what situations they might be in, and then show up open and willing to play and shift and mold to whatever the version is that everyone else agrees upon.

In terms of my college experience, I grew up in Texas and went to school in Michigan. So I was also leaving home. I was like, “Gotta get across the country. Be free, make my own decisions.” College was a tough time but a very fun time as well. You think you know yourself, and then you show up a little fish in a big sea of people like, “I don’t know what I want — I don’t know what I am.”

The school that I went to was a predominantly white institution. I grew up in Texas, so I was always around white people, but going to school, especially growing up in the South, you think, “Everyone else has it figured out. So I’ll go there and I’ll feel better.” It’s not the case. It’s all the same. You have to reckon with yourself now as an adult, as a Black woman, to try to find agency over those things, and to try to figure out what your Blackness and your experience is. It’s all those times when you’re sitting in those question marks and trying to solidify them into answers.

There was an interview in which series creator Mindy Kaling mentioned how the casting informed the characters. I’m curious about how much input you got to have in Whitney’s backstory.

Before we started filming, I heard so many horror stories of Black women showing up in Hollywood, getting to the hair trailer, and everyone being like, “What do we do here?” So right off the bat, I was like, “I can’t let that happen. I need to be proactive.” So I asked my team, “Can we just set up a meeting and talk to my showrunner about Whitney’s hair?”

In that [Zoom] meeting, I learned that they had wanted Whitney to have straight hair. I was like, “Well, she would sweat it out every practice if she did have her hair [straight].” There were a lot of conversations about how protective hairstyles are your go-to in college. You don’t want to be doing your hair all the time. Those sort of things I helped with, [and] my mannerisms informed things, but they took the lead on the storyline and all of that.

Whitney is seeking a college experience but the older man she’s in a relationship with is blocking that. A lot of young college girls want an experience, and then a boy ruins it. What is your hope for Whitney’s trajectory?

Oh dear Lord. I hope she’s honest with herself about her experiences. I think she has this fear of admitting that something’s gone wrong, for fear of maybe her mom, for fear of maybe public perception. She so desperately wants it to be okay, even though she’s not okay.

She doesn’t want to believe he is who he actually is; she wants to believe who he says he is. She’s clinging to this affirmation of being desired as a form of confidence and to say, “Ha! This person likes me, so I must be fine.” Really, it’s blocking her from herself; blocking her from experiences of being genuine in her spaces with her peers; blocking her from sharing her full self. Just blocking all of her blessings.

I need her to have her “come to Jesus moment,” wake up, and say, “You know what? I did something dumb, and that guy was creepy and weird and was not great for me. But now, I’m coming into a new chapter of myself. I have agency over my body. I will believe the red flags, and I will not fall into these same traps again.”

What conversations with your fellow actors on set stood out to you?

After this last year and a half during the pandemic, the Black Lives Matter movement, and wrong expectations of how far we have moved in the industry, I had to come to terms with things that aren’t as far along as I had hoped. That was really depressing to me [as someone from the theatrical world] for a time, just idealizing this world like, “They got it together in Hollywood.” But really, there’s still so much work to do.

So much that I love about being on our set was to be able to sit in a room of people with different backgrounds, have good conversations, and actually care about each other’s experiences and feelings.

Too often, women of color, especially Black women, have been portrayed as either stereotypically asexual or stereotypically hypersexual. Your character and other characters have more nuance. How does it feel to engage in a show like this?

I wanted to make her authentic and true to me, not force her to put anything on, not go into any stereotypes. I felt supported that they didn’t ask for a version of her that was a stereotype. They let her be messy and awkward, everything that she is, while also being Black.

There’s so much more work to do in the industry. I feel very fortunate to be in this position because of all the wonderful Black women and Black people who came before me.

I can say, “Okay, I have my foot in this door. Now how can I open this door for everybody else? How can I bring all my friends into the space and create spaces?” We have so many people doing this, so many lovely Black artists doing it.

I’m trying to figure it all out. I have so many dreams, and I’m hoping that the industry can meet them.

The 10 episode series continues with three new episodes on November 25 and December 2, leading up to the final two episodes of the season on December 9.